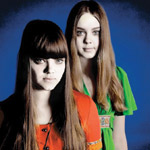 Maybe it’s their world-weary old souls. Maybe it’s the tough, yet angelic harmonies. But one of the fastest rising country-folk bands grew up a half a world away from the final resting place of their hero Gram Parsons. In five years, the Swedish folk duo First Aid Kit — made up of sisters Johanna and Klara Soderberg — have toured the world twice, recorded a song with Jack White and released one of last year’s best albums, The Lion’s Roar. And they’re only 21 and 19. Current caught up with big sister Johanna in anticipation of their first show in Ann Arbor.

You started to become musically recognized in 2007, when you were both barely teenagers. How did you get such an early start in music?

We grew up in a very musical and cultural family. Our father was a guitarist and songwriter in a band called Lolita Pop during the ‘80s. They toured a lot in Sweden, and in the US, too. He quit the band when I was born, but he continued playing guitar, writing songs and recording. Our mother is also crazy about music. Our parents always had a record playing in the background. They played lots of Velvet Underground, Television, Pixies, David Bowie and Patti Smith. We were influenced by this musical environment and making music felt like a natural thing for us. We were always singing and making up stories as children, though we probably never thought we’d actually make a living out of it. It’s pretty crazy how things turned out.

Your song Emmylou is a huge hit. Have you guys met Emmylou Harris?

We’ve never met Emmylou Harris. We are huge fans, obviously, and would love to meet her. We would be honored if she ever listened to the song. We hope we can get to see her in concert someday.

When were you first introduced to her music?

Back in in 2007, our uncle (another big music fan in our family!) gave us two Gram Parsons records, “GP” and “Grievous Angel”. Emmylou Harris sings harmonies on both of those albums and we fell in love with her unique voice. The way she harmonizes with Gram is so special. We started looking up her solo material and became big fans of her original songs and covers.

In 2008, you recorded the Fleet Foxes’ “Tiger Mountain Peasant Song” and it went viral. Later that year you played the song with them in the Netherlands. Could you tell the story behind connecting with them and playing that show?

When we uploaded our Fleet Foxes cover we sent it to them on their Myspace page. The next day the band wrote back to us on Myspace saying they loved the cover. We were overjoyed. They put it up on their Myspace profile page and that way lots of people found out about the cover, and of First Aid Kit as a band, too. We’ll forever be grateful for this, the song really did a lot for us.
A few months after we put up the cover we got booked to play at the Crossing Border Festival in a city called Den Haag in The Netherlands. Fleet Foxes also played this festival. We went to the front of the stage for their show and lead singer Robin Pecknold recognized us. When it was time to play “Tiger Mountain Peasant Song” he invited us up on stage, much to our surprise. We hadn’t practiced this song together at all. It was the wrong key for us, way  lower than in our cover version. We struggled to sing it with him, and it probably sounded pretty bad (laughter). However, it was an honor to get to sing it with Robin and we had a great time hanging out after the show. The entire band is full of such sweet people.

When you toured the U.S. in 2010 for your debut, The Big Black & The Blue, what surprised you the most — in terms of reception, the cities or the people — during that string of shows?

Both the cities and the people surprised us. The people at our shows were so positive and so responsive. We felt warmly welcomed. We were totally new to America and getting to see the cities we’d read about and seen on TV was a very exciting experience for us. It was so familiar yet so different from Europe. It felt surreal. We had never seen such big cars, buildings, beds or food portions. Just a completely different vibe from Sweden. We had a lot of fun.

You guys make the advantages of sibling folk singers obvious: the synergy and the perfectly crafted natural-sounding harmonies. On the flip side, what’s the hardest part of writing, recording and performing as sisters?

It’s hard to be with someone day in and day out on tour and then live together in the same house when you get back from touring. Sometimes we need a little break from each other. Also, because we’re family we can be too honest sometimes, that’s not so good. We honestly can’t think of that many disadvantages though.

Who is a contemporary rootsy folk band you would like to collaborate with in the future?

We love Laura Marling, Ryan Adams, Villagers, Joanna Newsom, Tallest Man On Earth. We could go on forever. There are so many great contemporary artists and bands that we would love to work and tour with.