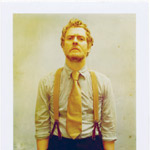 Last time Glen Hansard was in town he was fresh from a friend’s funeral and playing with The Swell Season for the first time since his romantic breakup with the other half of that duo, Marketa Irglova. His sadness seemed to continue into this year’s first solo release, Rhythm and Repose — an ambient collection of heartbreakers that wallow on the same grounds as his “holy trinity” he grew up on: Bob Dylan, Leonard Cohen and Van Morrison. And coming to age in 1980s Dublin probably will sculpt bone-chilling yearning into his tunes for the rest of his days.