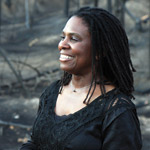 You won’t find blues music on your TV, unless there is a PBS fundraiser or other specialty music show being aired, though television programming can give you the blues. Fortunately the nature of the music is that you can get rid of your blues by listening or dancing to it and absorbing its healing powers. Television programming cannot do that for you because it requires passive participation, while the blues invokes active participation  –  it moves you.

You can tune into The Ark for at least three big time shows that require your active participation.
Singer/guitarist Ruthie Foster returns on the 4th with a soul stirring show that gets back to the basics of what music is about — authentic emotional expression and absorption of that energy by the audience. Her spirited delivery is a powerful vehicle that fuses soul, blues, folk and gospel into a message that leaves little doubt that peace and redemption are at hand. Her latest effort, Let It Burn, is a heart-felt release of her joyful expression at its best. Get ready for a feast of Louisiana Cajun music when BeauSoleil with Michael Doucet returns on the 24th. Cajun fiddler, Doucet,  has led this troupe for over 30 years revealing the Pelican state’s rich history as it is transformed into irresistible dance beats. Cajun, zydeco, country, blues, bluegrass, Tex-Mex, and Afro-Caribbean are all served up, precise and listener friendly. Their latest, Alligator Purse, will open your  ears to their bounty of musical styles.

The Local Blues And Local Brews at Guy Hollerin’s in the Holiday Inn Near UM’s Campus has a line-up of award winning musicians that are the real deal in local entertainment. Bobby Murray Band performing on the 1st brings an  impressive repertoire of jump blues standards from his long term role as guitarist and musical director for Etta James in the 1990’s. Party down with some funky urban blues from Motor City

Josh & the Big Three on the 8th. Root Doctor from Lansing has  the R&B, soul and blues grooves that will set you in motion on the 15th. Harper & Midwest Kind returns on the 22nd with great original music honed from his love of American R&B mixed with aboriginal rhythms. Harper’s use of the didgeridoo from his native Australia during performances is always intriguing. Ann Arbor’s first lady of funk and soul Lady Sunshine & the X Band will soothe and groove you with soul, funk, and blues originals and standards on the 29th.

You won’t need reality TV to enjoy the return of Happy Hour every Friday starting at 6pm at the Live Club at 102 S. First Ave. Fubar starts the season rolling with R&B, pop, and rock standards and originals on the 7th. Perennial favorite Drivin’ Sideways delivers soulful country, honky tonk, and rock ballads on the 14th and 28th. The Terraplanes drive home the blues, R&B, and roots rock on the 21st.

Conor O’Neill’s Irish Pub on Main St. not only has traditional music, but features some mighty fine blues acts such as Michael May & the Messarounds, the Blues Owls, and The Terraplanes on Thursdays and Saturdays. You can check out their updated schedule at
www.conoroneills.com/annarbor.