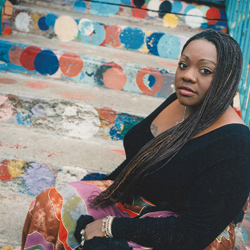 As one years ends and another begins, the blues keeps playing to the cycle of time with heartbeat rhythms, a head full of steam and the soulful sound that lets you know wherever it is being played, like Little Milton Campbell sang, “Hey, hey, the blues, it’s alright”.

Guy Hollerin’s Local Blues & Brews  at the Holiday Inn near UM’s campus on Plymouth Road and US 23 has been providing a danceable rhythm & blues venue on Saturday nights for almost five years. The club will celebrate their fifth anniversary entertaining us in March. To get ready for the next phase they will be closing the restaurant and bar for renovations January 21st, re-opening on February 16. But in the meantime…

Thornetta Davis, one of the most popular blues singers in the Detroit area returns on the 5th with a new CD in the works. She grew up singing in the church choir — the prerequisite for all great blues singers. Behind her a band of seasoned musicians will rock your troubles away with big time blues and soul from the Motor City.

Get set for some funky and swinging ‘jump blues from Motor City Josh & the Big Three on the 12th. From the first notes out of his Telecaster guitar you can tell Josh has big fun playing the blues and is a natural crowd pleaser. He plays the blues straight up — no chaser — and the Big Three keep the dancin’ groove tight.

Root Doctor checks in from the Lansing area  ready to cure your ills with a shot of rhythm & blues on the 19th. Vocalist and founding member, Freddie Cunningham is the doctor in charge with a prescription for writing grooveable originals and arranging an award winning blend of  R&B, and soulful dance covers.

The LIVE Club on S. First St. at Huron keeps Fridays rockin’ with the weekly Happy Hour from 6 –9pm with host band Drivin’ Sideways playing country and rock favorites on the 11th and 25th. Fubar plays soul, rock, and country covers on the 4th.  Experimental rock-n-groove band the  Mr Largebeat Experience performs on the 18th.

The Mash, below the Blue Tractor BBQ on East Washington St. is the newest cool venue featuring roots dance music in their cozy wood-lined room. Chris Canas Blues Revolution with funky soul blues on the 4th and 26th; Jump blues and boogie from the The Bluescasters  on the 5th and 25th; Rockabilly styles from Nobody’s Business on the 11th; The Flying Crowbars play roots blues on the 12th. Guitarist and singer Laith al-Saadil, leads the faithful every Thursday night. Check it out.

The Ark is not featuring any blues acts in its 36th Annual Ann Arbor Folk Festival at Hill Auditorium, but they are bringing the gospel –blues duo of Rev Robert Jones and Sis Bernice Jones on the 6th. Robert has worn many hats in the music business in the last 20 years including the role of radio producer/host and music educator. Along with wife Bernice they explore the many roads and stories that folk and gospel traditions present to us in life from down home blues to ringing spiritual duets.

Guitarist-singer Kelly Joe Phelps delivers blues and gospel inspired roots music on the 18th A major influence on his music are Delta guitarists, Skip James and Robert Pete Williams both of whom had deep spiritual leanings in their music and personal life. Following in those big shoes, Phelps shows his dedication utilizing a mastery of 6 and 12-string guitar techniques and a background in jazz and experimental music. His new CD Brother Sinner and the Whale  displays his soulful yet smooth voice interpreting gospel themes with the blues.

The  19th Annual Anti-Freeze Blues Featival weekend at the Magic Bag in Ferndale will feature headliners Savoy Brown with Kim Simmonds on the 4th and the legendary soul rockin’ singer-songwriter Andre Williams on the 5th.

The Detroit Blues Society is always ready to present you with their history and listings of the best blues in the Detroit area. Check out their website at www.detroitbluessociety.org.