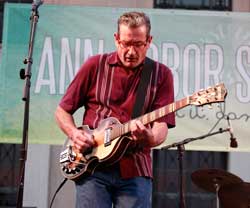 Sunday, July 7th’s closing night of 2013 Ann Arbor Summer Festival’s Top Of The Park features the roots rockin’ performance of George Bedard & the Kingpins. Coinciding with Bedard's  performance is the public release of his long-awaited blues CD “Further On”, a collection of his live performances with the Kingpins and some of the best Detroit area musicians.

A labor of love that began brewing in May 2012, the project was jump-started for Bedard in February 2013 when he performed at the tribute for the late Johnny Bassett, Detroit’s mainstay jump blues guitarist. This event sparked an affinity between Bedard and keyboardist Chris Codish, an integral member of Johnny’s Blues Insurgents since 1994. Upright bassist Pat Prouty joined in the magic of the evening.

“ The feel of performance that night was an exciting new experience and I was surprised at Chris’s ability to mesh the rhythms and step out on some amazing solos”, Bedard said.
It set the stage for another live recording that took place in May at Callahan’s Music Hall in Auburn Hills with Codish, Prouty, and Kingpin’s drummer  Richard Dishman on board.

“I chose Callahan’s because they’ve refined their room to accommodate a full guitar sound. The session with Chris reminded me of the work I did with Chuck Berry’s pianist, Johnny Johnson on “Hip Deep”. Rich and Pat added a true blues feel as the rhythm section”, Bedard added.

George Bedard’s musical journeys have crossed many junctions, mixing genres while retaining the feel of individual styles. Bedard’s guitar work was influenced by witnessing blues artists at the historic Ann Arbor Blues & Jazz Festivals in the early 1970’s and while reverently observing from the church benches of the Blind Pig’s basement.

“ The blues was my first love, and has always informed everything I do. I’ve been privileged to hear, perform with, and absorb the music of some of the greats”, Bedard reflected humbly. Some of those greats include performing with Hubert Sumlin, Eddie Taylor, Earl King, and Wanda Jackson.

Bedard’s musical road is paved with his exertions, hardships, redemptions, and wonder. The foundation of this road is the blues. Like many who have traveled it before him and the few who dutifully follow, passion, dedication, humility and respect are required. As these qualities have become the breath and blood of his music, a level is attained that is the pure and simple expression of being the blues.

The opening track, “Laid Across My Bed”, a tribute to Elmore James ala “Dust My Broom”, finds Bedard sowing the slide across the frets of his vintage Hofner hollow-body guitar like timely planted furrows in the field of Elmore’s legacy. His voice is dusted in blues lore as he respectfully blends lyrical verses from several of Elmore’s songs.

Bedard’s original songs display his development as a seasoned writer and arranger. “You Put The Hurt On Me” is a steady rolling number in the tradition of the West Side Chicago guitar style of Otis Rush and Buddy Guy. “The Only Thing” holds on to a funky country beat that digs deep into his blues nature. “King-O-Ling” is his arousing instrumental tribute to Freddie King.

Capturing the essence of Bedard’s live performances, “Further On” is a welcome addition to anyone’s musical library.

“I’ve always felt at home playing the blues”, Bedard remarked. With “Further On”, George Bedard has come full circle and it will most certainly take him home.
The Ark sponsors and hosts Part One of The American Music Series: Ragtime To Rock-n-Roll featuring George Bedard along with historian, scholar and performer Daryl Davis and others on August 23th.