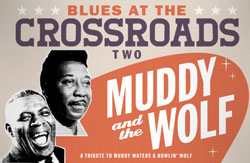 Throughout time, guitar gods of each generation have kept the blues alive, putting their own unique spin on the genre that acts as a foundation for many American made forms of music. Perhaps no blues class is more important than the guys, like Muddy Waters and Howlin’  Wolf — whose friendship and rivalry are the focus of this documentary Blues at the Crossroads 2, which screens at the Michigan Theater on February 9 — who strapped on an electric and invented the Chicago blues, inspiring those who followed, from Eric Clapton to rappers.