This Wheel's on Fire 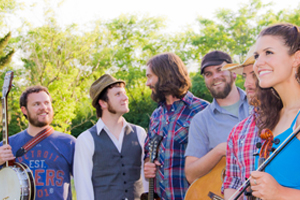 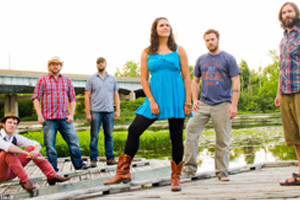 On an almost perfect day in early June, we strolled through the nature trails of Bendemere Park with the six members of Dragon Wagon. Instruments in hand, each casually plucking away, they radiated the same care-free, likable attitude that makes their high-energy bluegrass shows free-wheeling, captivating, and, basically, just a damn good time. As we were scouting a place to photograph — while being met by waves and confused looks from cyclists and runners — they joked, discussed upcoming shows and seemed to enjoy each other’s company, which is impressive for a band fresh off a 2,000 mile, two week trip.

Guitarist/vocalist Don Sicheneder and mandolin player Troy Radikin started Dragon Wagon four years ago. They spent two years swapping players in and out, but in 2010 they realized they found the group they were looking for with Diana Ladio (fiddle, vocals), Rich Delcamp (banjo, vocals), Fritz McGirr (drums, percussion) and Mike Bustos (bass).

“There was never a question,” Sicheneder says of the time when the band coalesced into its current, consistent line-up. “The second we met, the second we jammed together, everyone just looked at each other and smiled. We played with a lot of people — a lot of people. But there was never a question. Especially when you have times when you will spend days and days together in a stinky van, you want to make sure you like each other.”
It’s easy to see they’re good friends. When we find a spot to snap some photos, there’s a few of those goofy, half-ass, playful burns you only spout to people you’re close to (“I hope I don’t get deer tick,” “You’re a deer tick”), attempts to get the banjo player to pick “Dueling“ by humming it, and an easy-going vibe, lacking any sort of tension.

Halfway through the shoot, an older gentlemen stops on the trail, in the background of the photo, nonchalantly staring towards the posed band.

“Make sure you get him in the shot,” someone lightheartedly, yet sarcastically, says.

“Yeah, that’s the dude from Abbey Road,” another member adds.

Everyone laughs; the man looks confused and moves on.

Dragon Wagon had just arrived back from a New York run, and, by the time you are reading this, they’ll be pulling in back home from circling around the Great Lakes — hitting Chicago, Madison, Green Bay — then swooping back down to Ann Arbor via the Upper Peninsula. They get on the road in short bursts, sometimes logging thousands of miles in less than a month. During their “down time” they’ll hit four Michigan cities in a week.

“We like to take shorter tours; get  out for a week or two and get back,”  Sicheneder says.

Way of the road

Most people, they say, are super cool and hospitable at tour stops. But there’s always the volatility that comes with traveling, like a funny little tale of them getting kicked out of a campground in Boyertown, Pennsylvania, for the crime of trying to take a shower.

“That was funny; they were so mad,” Delcamp recalls. “We tried to be nice, but they came up like they watched Cops every single night of their life. They blocked our van in, started yelling at us. The best line of the whole event, though, ‘We know your kind. You rich musicians come in with all your money and try to rip off the little guy.’”

They weren’t aware that access to the bathroom wasn’t included in the $185 they paid to put up six tents for four hours. So they skipped out, giving up their scenic view of the local power plant. They moved on to New York, and their new hosts couldn’t have been nicer — they gave them food, booze, and camping space. They even let them use the bathroom.

On July 13 at the Blind Pig, Dragon Wagon will drop its first, full-length, self-titled album. Some bands that feed off of the unpredictability, energy and whimsical turns of live performances struggle in the studio. They didn’t hit that wall. But that’s because they played by their own rules.

Sticking to their guns

“Once we started doing it ourselves, it wasn’t a problem at all,” Delcamp said. “We weren’t pressed for time. We did it on our own time, when we could. It really helped us to be creative and extrapolate on  what we do live and bring that into the studio. It feels really natural.”

They did a lot of things outside producers might have frowned upon — they took chances, kept it raw, didn’t over-think it and, above all, made sure it wasn’t over-processed.

“We’re an acoustic roots band, and the thing is we’ve done a number of different demos and live CDs and things like that,” says Sicheneder. “But these are the songs that some of us have been playing for four years, and we really picked the best of the best out of the crop and tried to put together one full piece of work.”

After the photo shoot, as everyone heads back to their cars, the band engages in a debate about a situation where they are double booked. The group is split, people flip flop, they take votes, but no one seems overly concerned or raises their voice. There are shoulder shrugs and a recount, and somehow they subtly slide into what appears to be a decision. They get along even when they disagree.