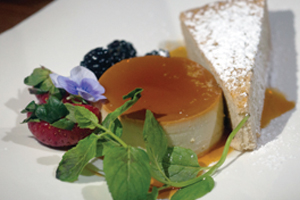 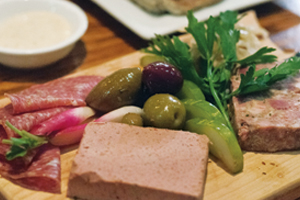 You can’t pigeonhole the food at The Ravens Club. (We’ll try to minimize bird puns going forward.)  It’s influenced by historical cooking, but not necessarily the same late 19th century / early 20th century historical roots which inform the décor and the cocktails. The cabbage rolls – a surprise star of the menu – are indeed inspired by early 20th century immigrant menus, and the Russian dressing comes from a 1908 Boston Globe recipe. The gattafura (cheese tart), on the other hand, is a relatively faithful execution of a Genovese recipe from 1570, accompanied an ancestor of modern pesto, documented in sources as early as 1360.

Chef Dan Vernia uses that tart recipe to make a point about his philosophy. At that time, cookbooks were beginning to have more of a regional focus, documenting local cuisine like the gattafura from Genoa, rather than laying out a standard collection of dishes. This development, he says, parallels the modern trend toward local cuisine and ingredients.  Conceptually, this fits in well with the Ravens Club’s focus on local producers – they’re not fanatical about using only local products, but they use as many local, high-quality, organic ingredients as they can, and they support local farms.

Just as you can’t stereotype the inspiration for the Ravens Club’s dishes, you can’t make generalizations about the flavor profile. Many dishes are very bold, others are not. At this restaurant, more than most, we found dishes that some in our intrepid crew adored, while others weren’t as keen on them. This isn’t a negative in any way; it’s great when food provokes strong responses, and it’s especially refreshing in a Main Street restaurant, where so many play it safe.

Rabbit Confit: Tender rabbit served on top of a Native American-inspired corn bread, dressed with micro greens and crispy sweet potato crisps, with a small pool of salsa verde that contrasted well with the rich meatiness of the rabbit. We recommend trying this before they rotate the menu.  In fact, you might not want to share it.

Genovese Onion Gattafura: This classic pillow of a tart is filled with a rich creamy mass of Cipollini onions blended with caciocavallo (an Italian curd cheese) and bocconcini (a type of mozzarella). Cipollini onions are naturally sweet (for onions), and the long cooking brings that delicate sweetness out even more. Served with an herb-hazelnut sauce (the one from 1360).

Charcuterie: All made in house, and great for a group. Ours featured a rustic country terrine, which had a intense meaty flavor and pleasing texture; a creamy light chicken liver mousse with phenomenal buttery texture; and a fennel salami.  Each of the three had its partisans. Served with olives, radishes, fresh pickle slices, Brinery sauerkraut, and, of course, crackers for the meats.

Antelope Ragout Dolceforte: A favorite of most of the group. A tender stew of braised Texas Nilgai antelope in a mole sauce of mild poblano peppers, balsamic vinegar, and chocolate topped with rapini and perfectly cooked saffron papardelle, with deep, rich, layered flavors.  (To illustrate our earlier point, this is Joe's favorite dish, but Lisa finds it a bit too heavy and isn't a fan of antelope.)

Grilled N.Y. Strip Steak:  The Ravens Club knows how to make a great steak, and they give it their own distinctive touch by serving the steak over roasted potatoes and topping it with two sunny side up fried quail eggs.  (Steak and eggs.  Get it?)  Our steak was perfectly cooked and nicely seasoned. It’s naturally-raised Michigan beef with a  bit of "toothiness" that you don't get from unexercised pent-up cattle, and more beefy flavor. We enjoyed mixing the egg with the potatoes and mopping it up with the sauce.

Braised Beef Shortrib: A fork-tender, meat and potatoes dish. A bit remiscent of a pot roast, but with the components separated. Mildly-flavored, but that might be in comparison against the heavy flavors of the antelope. The wedge of dauphinoise potatoes –  thinly sliced, then cooked in cream, butter, and a touch of garlic, enhancing their potatoey-ness –  was one of the best side dishes ever.

Lamb and Pork Belly Cabbage Rolls: A trio of cabbage rolls stuffed with a mix of lamb sausage, pork belly, and rice, topped by more rice and in a pool of lightly spicy arrabiata tomato sauce. The meat-rice filling tends toward the dry side (in spite of the pork belly), but the wonderful blend of Eastern European and Turkish flavors between the rolls and the sauce more than makes up for it.  Another group favorite, this is perhaps Lisa's top dish. (She once accidentally left her wrapped-up leftover cabbage rolls behind and mourned the loss for two days.)

W. Indies Vegetable Pepper Pot: Though the menu is heavily slanted toward omnivores, the pepper pot dish is an excellent vegan option.  This West Indies-inspired ratatouille is served over risotto mixed with plantains and squash. Mildly herbed tomato sauce ties together the zucchini, eggplant, and onions, which according to Chef Vernia have each been cooked separately, with their own spicing, before being combined. The flavors are rich enough and the rice creamy enough that it's hard to believe it's vegan. The spicing reminded us of both Caribbean and North African cuisine.

Chocolate-Round the Block: Perfect for sharing between two (or even more) if all you want are a few sweet bites to close your dinner. Featuring three local chocolate creations.

Lavender Infused Creme Caramel: This one wins the most contested award. The creme caramel was perfection – delicate, creamy, yet with a bit of firmness, covered in a beautiful caramel sauce.

Presentations, across the board, are lovely, and service was expert and knowledgeable. Ravens Club is also justifiably known for its innovative and historically-inspired mixed drinks. You can treat it as an upscale bar with excellent snacks, or as a special-occasion dinner destination, and you won’t be disappointed either way.