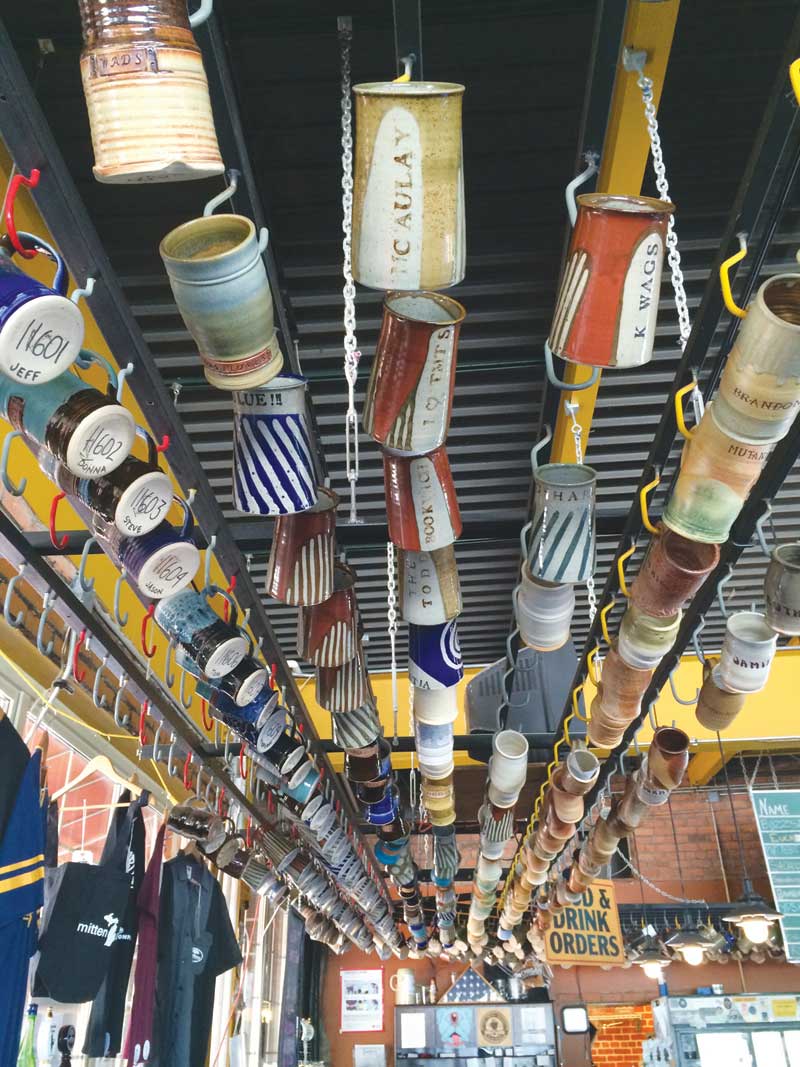 Mug Club: a society of like-minded beer drinkers who assemble in an agreed-upon tavern, regularly greeted by name at that tavern by the establishment’s proprietors and staff, who serve their thirsty patrons suds in personalized mugs kept in proximity to the bar. Arbor Brewing Company Microbrewery (Corner Brewery) in Ypsilanti is home to one such club.

When I arrived at Corner Brewery, Kari Peron, General Manager, welcomed me to a table and offered me a beer. Presently, a man who I had known via email correspondence as Kevin Bradner, Mug Club Manager, appeared and introduced himself as “Monkey.”

“Originally, there were several Monkeys,” he said. He waited a beat, beamed, and then completed the thought: “The others still exist.”

“Ah,” I said, but at that time Monkey had no more to say on the matter. John Ritenour, Head Brewer, joined us soon after this exchange, and our conversation turned to the order of business.

I asked first about the provenance of the Mug Club. Is this the kind of thing that has occurred at long wooden tables in the Black Forest for hundreds of years? Is it a secret society? Are there keys, or purple cloaks, or a code of conduct?

Nah. Monkey beamed again, delighted by my ignorance. Kari, very gently, shook her head. The Mug Club was founded in 2006, in the auspicious year of the pub’s Ypsilanti groundbreaking.

An interested party gains admission to the Mug Club with an introductory membership fee of $50, paid to the bar. In return, members receive discounts on beer and are given a handcrafted mug that can be personalized with idiosyncratic specifications. “Songs are like tattoos,” Joni Mitchell once sang mournfully, and I suppose, so are mugs. Each mug takes six to eight weeks to be designed and handcrafted by area ceramists Autumn Aslakson and Ryan Forrey. There are more than 300 active Mug Club members, and their mugs dangle attractively from hooks above the main bar. Painted on one is a leggy damsel with squirrel tableau, on the next, a taciturn, dignified cat, on a third, a skunk assumes a vainglorious posture, on another, a ship sets sail on turbulent waters.

On a designated Tuesday evening from 7—8pm, Mug Club members attend, for free, Beer of the Month tasting parties, where sneak previews of forthcoming beers are made available. Brewers give talks about the brew of the month—replete with both educational points of craft and anecdotal homages to local heroes like the Violin Monster. These events are packed, Kari, John, and Monkey concur, and on some occasions culminate in the competitive guzzling of fine brews from a large boot.

They told me about the beers, their favorites.

Monkey revealed that one of the decorative signs at Arbor Brewing Company, Corner Brewery’s sister pub, bore his image for a very potent beer called “The HX0.”

Kari pointed out the flame-haired woman on the dewy label that I had been peeling off of my bottle of Ypsi Gypsi. “The name of that beer started as my nickname,” Kari said. “That’s me.” Kari smiled, and so did I, delighted by this sweet gesture, by the camaraderie, personality, and warmth emanating from this place.

And then John told me about one of his favorite beers: Fig Jam. “Know what it stands for?” I didn’t.

“Ah, so Fig Jam is your nickname? Perhaps this is what you prefer to be called?”

Nah. The table roared, Monkey the loudest. Fig demurred. “Yes, I created the beer, but, no, not because it was my nickname.” John, as he preferred to be addressed, extolled the robust Autumnal flavors of the Fig Jam brew: figs, malt, and raisin. “It’s a confident brew,” he told me, made for, “A confident dude.” Wherever that man is, I hope he’s reading