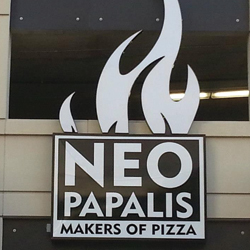 U of M student’s get a new twist on an old favorite with Neo-Papalis, which recently opened at 500 E. Williams St., next door to the original Cottage Inn. Unlike the the  Chicago deep-dish style made at the original PizzaPapalis, Neo-Papalis will sling thin crust pies that are baked in stone-hearth ovens.

A marijuana growth facility has been proposed to the city’s planning commission. Daryl Mynes, co-owner of People’s Choice Alternative Medicine, applied to open at 834 Railroad St. If approved, it would be the second in town; Green Vitality Remedies is already open at 576 S. Mansfield, which was approved in July.

The Scio Township Planning Commission voted to recommend a conditional use permit request for the home improvement chain Menards on the corner of Jackson and Staebler Roads. If a site plan passes, the Menards may open in 2013 or 2014.