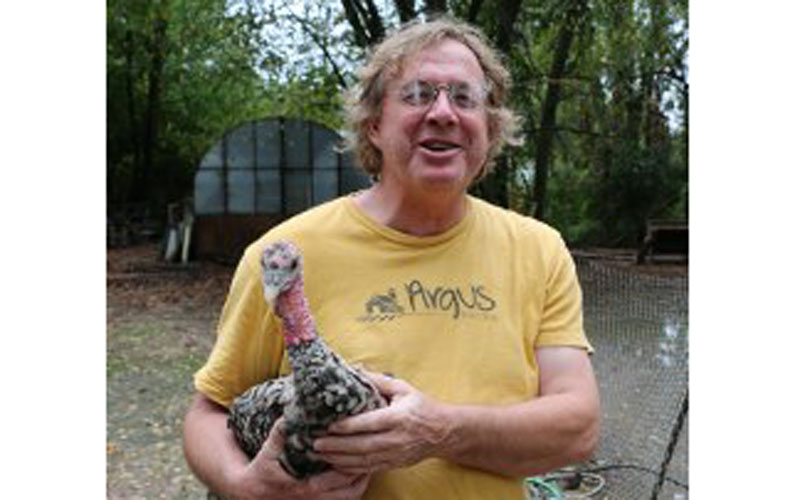 “I am the top cock!” John Harnois declares.  “I’m ruling the roost!”  Harnois is asserting himself to a coop full of annoyed-looking turkeys.  These birds can be aggressive and have some alarming spurs on their feet, but he knows how to keep them in line.  “You’ve gotta get down to their level.  I do this with all the birds that challenge me.  I get down, I spread my wings, I puff up and I go after them until they run away.”

It’s just another day at Harnois Farm, where chickens, ducks, geese, and the aforementioned turkeys are clucking, honking, pecking and fattening up.  While he’s probably best known in these parts for the eggs he sells at places like Plum Market and Argus, Harnois also raises poultry for the dinner table.  Watching him muck about his “ranch,” you wonder how a guy from the west side of Detroit who, in a former life, photographed crash tests at GM’s Milford Proving Grounds, ended up hip-deep in fowl.  It’s pretty simple.  “I wanted to know what I was eating,” he states.

Harnois’ previous farming experience was limited to a childhood visit to a dairy farm, and a few years residing in an old barn in Farmington Hills.  In 1993, he purchased a property in Webster Church Township that was zoned for livestock.  “What do I know about livestock? Not much…well, really nothing,” he admits. “If you lose a steer because you’re ignorant, which I was, it’s very expensive.  Chickens? Not so much, so I decided to do chickens.”

A year later, he added White Broad-Breasted and heritage breed turkeys to the farm.  “I did it for a year or two, and then realized I was subsidizing everybody’s Thanksgiving.  I wasn’t making any money, selling at about $1.50 a lb.  It cost me way more than that to feed them, and so I stopped.”  Later, at an event with a number of local foodies, he was asked why he was no longer raising turkeys.  “I can’t compete with Kroger’s,” Harnois told them. “They literally sat me in a chair and said, ‘Listen, what you sell, nobody else sells.  We will pay you whatever you want.’  I just didn’t understand that there was a demand.  I raised my prices, and I sold out.”

His first commercial turkey customer was Zingerman’s Deli.  They continue to use his turkeys for their annual Feast and to make John H. Turkey Pot Pies. “Within two weeks, people were calling me and saying, ‘Wow! You’re selling to Zingerman’s?’  They put my name up in lights!”

Harnois’ turkeys, like the rest of his poultry, are raised cage-free and fed a locally-grown and milled feed that contains no hormones or antibiotics.  These are not your supermarket gobblers.  He recalls the reaction he received from some cousins who tried one of his birds.  They complained that the bird was too moist and “gamy.”  “I was devastated,” he recalls.  “I was so embarrassed that I’d done something so bad.”  The next night, he related the story to those same foodies who had convinced him to continue turkey ranching.  “And as I’m telling them, it’s starting to click–’too moist.’  Oh, succulent!   ‘Gamy.’  Oh, it has flavor.  Oh, she was expecting a dry, tasteless Butterball!”  Later, he thanked his cousins for the “compliment.”  “You can’t buy a complaint like that!”

Getting your hands on one of his turkeys for this holiday season will be a challenge.  While the avian flu that has decimated poultry flocks in the Midwest this year has largely bypassed Michigan farmers, our hot and humid summer took its toll on Harnois’ birds.  Most of his turkey chicks didn’t survive, and his stock is a third of what it normally would be.  He expects the bulk of his turkeys will go to commercial clients, but thinks he may have a few available at the farmer’s market.  Harnois occasionally toys with the idea of getting out of the labor-intensive job of raising fowl.  “I raise really good food. What I’m not, is a really good businessman. I’m a large very small farm,” he concedes. “Parts of me are thinking about getting out.  But, why I don’t is this–when people come up to me and say ‘You have the absolute best!’ And they thank me for doing what I do.”