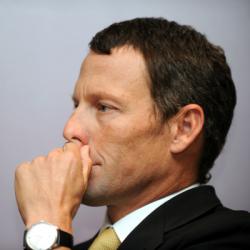 A poor teacher in Oxnard, California who made some questionable—but legal decisions in her past, lost her appeal to return to the classroom. Stacie Halas spent less than a year in the adult film industry when she claims she was in financial trouble, then continued to pursue her dream to become an educator and earned a job as a middle school science teacher. However, when school administrators caught wind of her brief stint in porn, Ms. Halas was fired, despite her job record. So, Ms. Halas took the school district to court. Judge Julie Cabos-Owen wrote in her decision, "Although (Halas') pornography career has concluded, the ongoing availability of her pornographic materials on the Internet will continue to impede her from being an effective teacher and respected colleague." Normally, Internet commenters are ignorant dicks, but read the comments below the article because they actually pose some valid points about this case.

A Weak Moment to Live Strong

Ok, the big news all week is Lance Armstrong, former seven time Tours de France winner (his titles were stripped last year) coming clean on doping to none other than Oprah. She beats a courtroom! Well, after over a decade of denial and criticism of his accusers, Lance finally gave in. First he reportedly apologized to his Live Strong Foundation, then he did a candid interview with Oprah to air Thursday night on her cable network OWN. Making sure not to give away any juicy details, Oprah hit the morning news circuit tuesday to confirm Armstrong's confession. But why would he admit to it after so many public denials? Why not hold out longer? Guess he doesn't have the balls to do it anymore.

I Pledge Allegiance to Wal-Mart?

In what very well may be a major image facelift, the world's largest employer, Wal-Mart, announced a three-part plan to help boost America's economy. They plan on hiring more veterans, move part-time workers to full-time and in the biggest news of all, they plan to spend over $50 billion on American-made products! Hark, do I see pigs flying in the distance? Read what their CEO of US business said at a conference yesterday and then think about the last time any congressman sounded so noble.