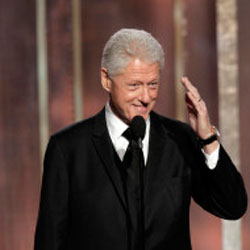 Clinton surprised everyone when he took the stage at last night's Golden Globe awards to introduce "Lincoln." Steven Spielberg, the director of the film, as instrumental in convincing Clinton to introduce the film.

Do You Want a Book With That?

McDonald's in the U.K. will start distrubuting books in Happy Meals instead of toys. The partnership with Dorling Kindersly and WH Smith will make McDonald's the largest book distrubuter in the U.K.

Awhile back over 34,000 people signed a digital petion to start construction of a Death Star by 2016. Not only did the White House respond to petition, but they did so in a must humorous manner, saying:

"The Administration does not support blowing up planets."