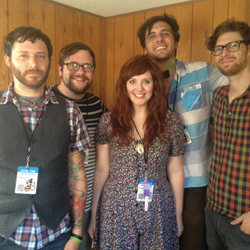 Who would you say some of your biggest influences are?

Shanna: We all have different tastes

Eric: Arcade Fire became a pretty big influence too because of that kind of big sound. Explosive.

Jesse: Yeah, a little over a year ago I joined the band and growing up with post rock, that’s kind of my influence for guitar stuff.

Eric: And everybody writes their own parts for their instrument so those influences all come through in the music. So that makes it kind of …

Jesse: So you’re just like jamming out and doing your own thing.

Eric: Yeah, we pull it together. Something new and original.

Eric:  Love it. Love the road.

Shanna: This weekend has been great. It’s been really fun.

Dan: When we get back to our regular jobs it’s always…like, ugh.

What do you guys do? What pays the bills?

Justin: I’m a social media manager for a design firm.

Jesse: I just started a new job as a network administrator. So working on computers.

Dan: Now I work for a manufacturing company doing all their marketing and social media and web design and videos and all that stuff.

Do your employers know that on the weekends you guys just rock?

Eric: If we’re only talking about the tour so far then not festivals -? Double check

Shanna: Bonnaroo was pretty awesome. Any fest for us because the people, they’re out to hear music. And they want to discover music and they love music and that’s the best kind of crowd to have. Other than a bar where people are watching football on tv and just …

Is that a bummer when people aren’t really paying attention to you?

Eric: Oh yeah. It is. We take it as a challenge. Every once in a while they’ll turn their head from the tv and we’re like, "I gotchya!"

What’s the weirdest thing that’s happened on the road so far?

Shanna: Oh my gosh. Are you talking about this weekend or in general because that’s a good question…Well Toledo, Eric got mugged.

Oh no! I'm so embarassed. Where were you?

Eric: at the Ottawa Tavern, they went for the cash box. Its It’s okay. I yelled loudly at him and he went away.

Justin: He pulled out his whistle [laughing]

Eric: Oh yeah. We were pulling into an alley and two people were laying down in the road and just rolled out of the way. Weirdest thing I’ve ever seen in my life. OH and once In Philadelphia there was an older lady – older, she was like in her probably eighties… and grinding. Other people would try to dance with her and she was like pushing them away! They thought it was funny. And they were like trying to dance with her and she was like “Get the f*** off me.” It was weird.

So what are your expectations for the new record?

Justin:  I want to play it as much as possible. Not in my CD player but just play it out. I just want to get our music out there.

Shanna: Every song and album is a story… to share those experiences with other people is the reason why we do what we do. That’s the most exciting thing.

Eric: Right, one song is meant for my brother, one is for my grandpa. We have a story for every song.

Shanna: That’s the only thing. We don’t have time to tell the stories here whereas somewhere else you might.

Jesse: This is great too though.

I think that people find it refreshing to kinda know what goes in behind the music.

Jesse : Because people can identify with songs. that’s what music is all about.

Shanna: We get a lot of people coming up saying that! They want to talk. People listen to music for healing and for, you know, they can identify with it.

Eric: They want to talk. We want to listen.

Justin: We’ve all had that moment where you put on that record and it’s the perfect record for that time.  I want our record to do that for somebody.

So is there anything else that you guys wish you were asked in interviews but never really had the opportunity to talk about?

Eric: We like the strange questions.  Ask us something weird.

How about a weird tattoo story?

Justin: A weird tattoo story? All these tattoos were free!

Eric: Dude, this guy is full of weird stories. THE DR. PEPPER STORY!

Justin: I can unpack this but I’m not going to. I was moving and I drink a lot. All I drink is Dr. Pepper. For real, that’s all I drink. As a matter of fact, last night we got into the hotel at 3am. The hotel was out of Dr. Pepper. So I ran to Sheetz and got one and a pint of ice cream and just sat in the hotel room and ate it in the dark. I’m just trying to get you into like how much I love it [Dr. Pepper]. I was moving from Kent to my buddy’s apartment one day and my refrigerator was stocked full of it and I didn’t want to bring it with me so I was just packing chugging, packing, chugging, packing, chugging. And I was eating Arby’s and I was drinking and I felt something hit my lip. Like the beverage was kind of, it just didn’t come out the correct way, like you would want it to.  I end up taking it to the bathroom and dumped it out to see like what it was, I thought I just backwashed like roastbeef …

Justin: It was… A condom! Hey! Condom in my Dr. Pepper!

Justin: False. False. So I called. Obviously. I had a friend with me as witness and I called the 800 number. God bless that girl because she got an earful from me. But she was so helpful. But anyways, so I called and she got me through to the right people and it ended up being, because I took it out of the can they couldn’t prove that it was in there! So what I got was a letter from them apologizing but not taking any responsibility but just saying “we’re sorry you had a poor experience.” I got a year’s supply worth of free Dr. Pepper.

Justin: And I got a shirt.

Does that take out the scarred memory of that being in your mouth?

Justin: I’ll be honest with you. So now when I drink them, I turn the tab around. Just in case. It’s a filter.