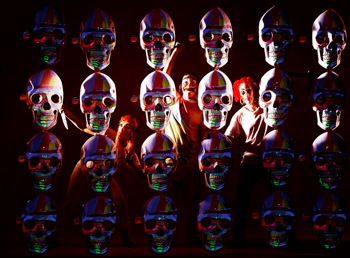 Avey Tare’s Slasher Flicks is coming to the Blind Pig Friday, April 18th. No, this isn’t some spooky cult movie night—more like a spooky cult rock band. Slasher Flicks is the latest music project of Avey Tare, best known as the de facto frontman of Animal Collective. Joining him are Angel Deradoorian of Dirty Projectors on keys and Jeremy Hyman of Ponytail on drums. The self-described “jazz power trio” is a certainly inventive bunch, creating songs that “come from a place that’s not human.”

Jazz may not be the best word to describe Avey Tare’s Slasher Flicks. A hyphenated genre seems more appropriate, like psych-pop or thrasher-twee, although the eccentric nature of their music makes it hard to label at all. The synth-heavy styling of the band’s debut album, Enter the Slasher House, has a brooding, vagabond nature to it, while still maintaining an upbeat vibe. Imagine cheerful little songs enveloped by eerie shadows. Frantic, meandering vocals float over looped effects, distorted harmonies and glassy guitars, while atmospheric overtones hover throughout.

“Little Fang,” Slasher Flicks’ first single, is a catchy tune that was recently named Best New Track by Pitchfork. It was also featured on NPR’s All Songs Considered and in The New York Times. A music video for the song recounts the story of a cat/werewolf hybrid puppet named Little Fang, on his (or her?) way to a “cerebral carnival.” The accompanying music is just what you’d expect—weird, yet accessible. Creepy, but fun.

Still not sold? Visit the band’s website to see and hear more. More than just a dumping ground for tour dates and press photos, the site is almost mesmerizing. It could be construed as a work of art in itself, with creepy animated graphics seeming like a nightmarish take on a Monty Python cartoon.

Their album comes out April 8th on Domino Records. And based on the theatrics in their music, videos, and website, their upcoming gig at the Blind Pig is bound to be anything but ordinary.