Since its 2012 premiere, the international film festival Cinetopia has made its home primarily in Ann Arbor. This year, the festival expands to Detroit, with movies in more venues than ever before, and the new Detroit Voices competition, a partnership with Allie Media Project. Heading it up: Detroit native Sultan Sharrief, who studied film at U of M and currently makes his home in LA. He’s produced, edited, written, and directed the feature “Bilal’s Stand” and the short “The Flow,” currently in post production. He took some time to talk with us about what it takes to make movies today, and about who should enter the Detroit Voices competition.

Current: What was the movie that made you want to be a filmmaker? 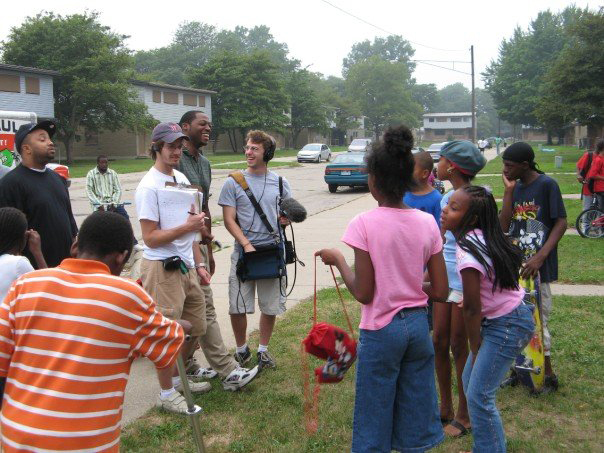 Sultan Sharrief : The Matrix. I was in high school when it came out and it was wonderful in the true sense of the word, story-wise, technology. I saw it and then I turned around and saw it again, and I thought, if I could make somebody feel that level of wonder and amazement, that’s what I wanted to do.

So you didn’t know from the time you were a kid?

No. I was one of the kids who took all honors classes, all AP. I grew up in Detroit, and I graduated from Romulus High School; I was on the premed track.  I was really into veterinary medicine; I would watch anything with Jack Hanna. I wanted to be one of those people you’d see on TV in an animal documentary, the guy who rode the nose of the killer whale!

At U of M, they don’t have a pre-vet track, you just do premed. Organic chemistry weeded me out. So I ended up majoring in film. I took my first ever film class, and I did really poorly on this one test, I got a D. I’d never gotten one before, so I looked through my notes. They were actually all film storyboards. While the teacher was lecturing, I was planning my short film.

Did you start having more fun?

You know, people always say, when you find the thing you love to do, it won’t feel like work, and I always thought, well, that’s bs. Any job will feel like work. But the truth is, all of my film classes just felt like I was playing, even figuring out details and budgets—it’s like putting together puzzles, which I always loved as a kid.

Is there a particular part about filmmaking that you like more than others?

It’s really evolved for me. I love writing and coming up with ideas. An idea would hit me, full form, I’d write a page and a half movie treatment. I also really connected to the organizing side. I have 8 siblings, so getting everyone to school was pretty complex project management,  constantly having to organize who was doing what, grocery shopping, cooking dinners. If you think about taking a trip to Cedar Point, it’s a production.

Did your parents freak out when you changed your major from pre-med?

My mom was always really supportive of everything I did. My parents kind of didn’t know where it came from, but once I started explaining my connection, storytelling, their advice was, if you’re gonna do something, do it well and do it properly, and then you can succeed at everything. In fact , a lot of students will do a double major along with film, with something they think they’ll be able to use more. But my mom said, put all your energy and time into one thing. So I did.

After graduating, what was your first job?

I worked for a show about celebrity justice for TMZ. I had to log tape, which is incredibly tedious. That was the summer of the Kobe Bryant rape case, and something was going on with Michael Jackson. TMZ has this vault, I had to request all these tapes, and then sit and fast forward and rewind looking for clips. It was rough.

So I muscled my way into an internship, and they would let me go and shadow. I would sit with the editors, and then the writers, and the directors, and producers. And I realized I could do this.

Your movies—Bilal’s Stand, Mooz-lum, which you associate produced—are at least partly about being Muslim in America, as well as being from Detroit. How important is it to you to express your roots?

September 11th happened my second week of college, and shortly after that, a mosque was firebombed. Everyone wanted to ask questions of all the Muslim students on campus. Now being African-American and Muslim, I’m a double minority, and so it’s important to understand other people’s narratives and modes of communication. People would say things like, I’ve never met one of those people before. And I would think, you live right next to one of the biggest African-American populations in the country, and southeast Michigan has the highest concentration of Muslims; how could you not just know someone, from a store or a job or through a friend? And the news environment is so fast-paced, it just cranks out stories, but forgets that human beings are the ones who make the stories.

So it’s not only Muslims, but where I come from, Detroit. I did a project where I researched films shot in Detroit, and of the 50 or so that had been shot there in the last 50 years, only 2 didn’t involve someone with a gun chasing someone. That’s how people always see that particular environment, it’s always framed in a certain way.

To give you an example, I was working on a project in 2005 producing a feature. The Pistons were in the NBA final. We had an all U of M crew, all students, and I was having to schedule around the Detroit Pistons. People were wearing Ben Wallace Afros, people would hit their horns while we were shooting and yell “DEE Troit basketball!” So cool, we love Detroit. Well, we shot an exterior scene, where the main character was picking up a prostitute. And we couldn’t get anyone to do it. They’d say, we’re not standing outside in Detroit from 8 p.m. to 8 a.m., we’ll get robbed, and all the time they’re wearing their Pistons stuff. So we take a crew of six people out of the 20 working on the film, and we’re shooting this guy picking up a prostitute in front of the Fisher Building off of I-94. Well, these kids come out and open up a fire hydrant and start playing in it, just like in a Spike Lee movie. Here we are with all of these assumptions about this city, and kids live a block away, they play here. We’re coming to these places and deeming them slums, and all the while we’re representing an environment where people live and play and work–the reality is never shown. All of those students who refused to come because of their misperceptions missed out on that.  We’re deleting the real people from the equation.

I didn’t want to do that. I realized then, if I’m gonna be a filmmaker, I don’t want to just tell fake stories. I want to go to those kids and say what is your story? Because I came from that place,

Is that the inspiration of Detroit Voices, the Cinetopia competition? 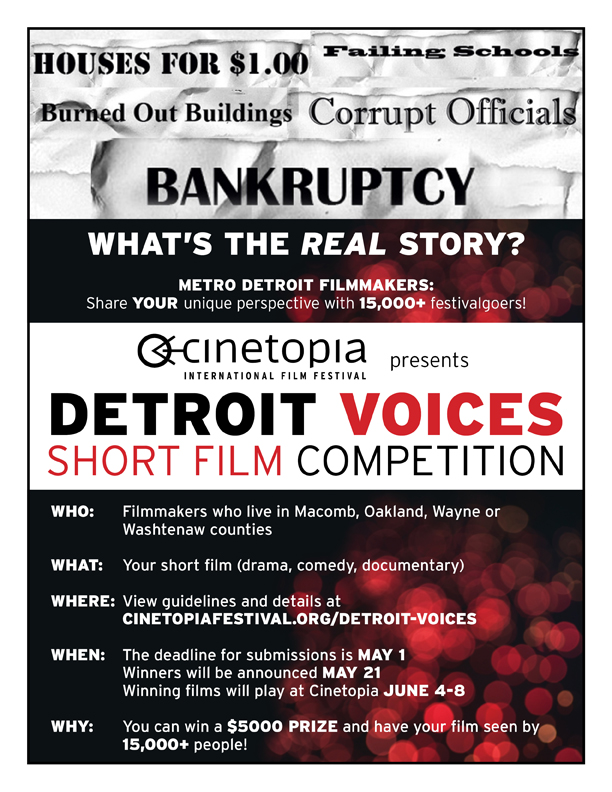 Yes. When people find out I’m a filmmaker, everybody wants to pitch movie ideas. They’re amazing stories, and so I always turn around and say, no, YOU should make a movie about that. For less than a hundred bucks, you can buy a camera lens for your phone and a microphone. That’s all you need. I saw an amazing documentary about migrant workers at a film festival this year, all shot on an iphone.

A big part is getting people to commit. You can do it. A lot of filmmaking is logistics, it’s getting people to show up at the right times. I’m hoping to demystify the process. People think they need special training, but mastery of filmmaking is a process. Just jump in. A lot of the rules of filmmaking that people think are written in stone were created around 1930, and a lot of people overlook that we have new technology, new channels, trending viral things. People throw random stuff up on YouTube all the time, and some of it hits.

We want to encourage youth and adults, it’s a gateway to the rest of the festival, and then hopefully they’ll attend Cinetopia. Anyone from Macomb, Oakland, Washtenaw, or Wayne counties can apply. There’s a high school and an adult division. The info’s here: www.cinetopiafestival.org/detroit-voices/ 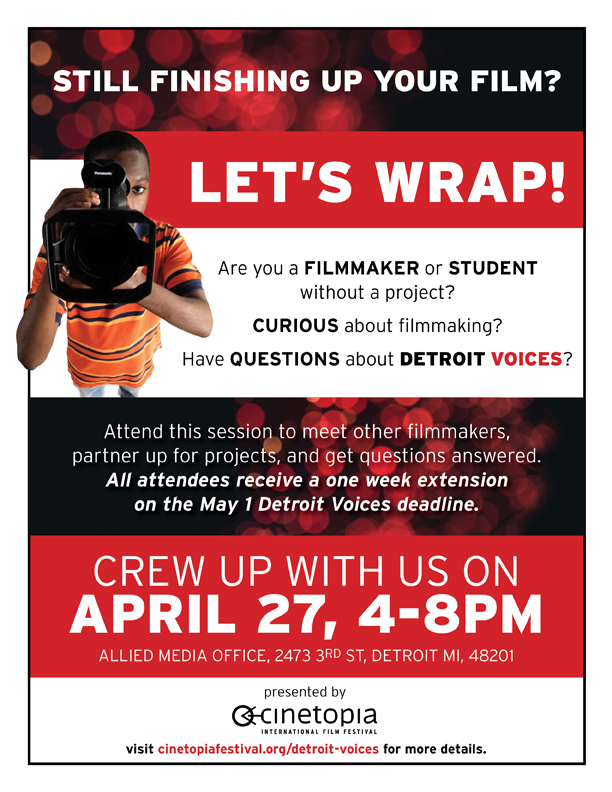 When do they need to apply by?

The deadline’s May 1, and we’ll announce the winners on May 21. The winners get money and their movies will play at the festival!

Does it have to be new material, created just for the contest?

No. If you’ve got something you’ve already made just kind of sitting and you don’t know what to do with it, submit it. And we’re having a special event on April 27 at 4 p.m., called “Let’s Wrap.” It’ll be an informal workshop, where people can come together to support each other; they can even pick a project to support. If they participate, they can get a one week extension for entry.

I repeat: Just jump in. You can do it.