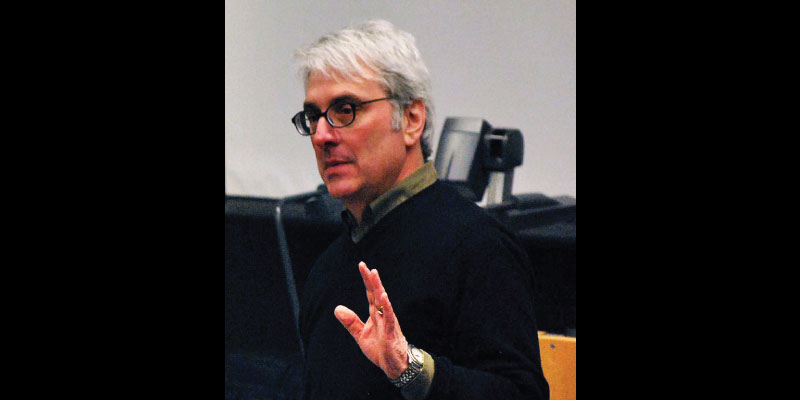 Jim Burnstein loves Shakespeare so much, he bailed on law school to study him.

“I knew I was gonna be a lawyer from the time I was 10,” says the Director of the Screenwriting Program at UM. “But in my senior year of college, I took a Shakespeare course from Russ Fraser, one of the top Shakespeare experts in the country, and my head started to spin.” On his way to law school in Madison, WI, Burnstein realized he’d made “a horrible mistake.” He gutted it out through one semester, then headed back to UM to study creative writing.

“I just started to write, anything that would pay the bills,” says Burnstein. “Basically, I would buy my creative writing time by writing TV commercials, ads, articles.” He became fascinated by the form of screenwriting, believing that “if Shakespeare were alive today, he’d be a screenwriter.” He also began teaching Shakespeare to an unlikely group of students: soldiers at the Selfridge Air National Guard Base near Mount Clemens, MI.

Then, a TV movie he had written was optioned for Timothy Hutton, all the rage in the aftermath of “Ordinary People.” Two weeks before production, Hutton quit, and the project died. “I went from not thinking the business was hard, to realizing it’s impossible,” say Burnstein. A meeting with the man who would become his mentor—Kurt Luedtke, Oscar-winning screenwriter for “Out of Africa” and UM alumnus—pushed him forward. “Kurt said, ‘Look, as long as you’re not gonna get paid, why not NOT get paid more? Stop screwing around with TV, write a feature. Tell the stories you tell me about teaching Shakespeare to soldiers.’ He said if he liked my screenplay, he’d option it. “

Luedtke proved to be a tough taskmaster, insisting on a series of rewrites over the several years it took Burnstein to turn his own story into a movie. Finally, 10 years from the day he’d begun it, “Renaissance Man” went into production with Penny Marshall at the helm, starring Danny DeVito as a short Italian version of Burnstein and Gregory Hines as the main soldier/student.

The film began Burnstein’s screenwriting career—one he’s been able to conduct primarily from his home in Plymouth, Michigan. His desire to pass on his hard-won knowledge to the next generation of film writers is now the foundation of the program he directs in UM’s department of Screen Arts and Cultures. And he still channels Luedtke: extensive rewriting is an intrinsic part of the program.

His students attest that his system works. “The more I work with producers and development executives in LA, the more I come to appreciate how expertly Jim designed the program. Producing an entire screenplay in a single college term seemed like a daunting task, but that’s the timeline professional screenwriters are typically expected to follow,” says A. Brad Schwartz, a recent graduate of the program whose book “Broadcast Hysteria: Orson Welles’ War of the Worlds and the Art of Fake News” was published this year to glowing reviews.

The end of an era

But Burnstein has had to watch one dream die painfully. Inspired by location work he’d done in Winnipeg and Louisiana, he saw how generous tax incentives could turn unlikely areas into film production magnets. Appointed by Governor John Engler in 2003 to serve on the Michigan Film Office Advisory Council, he continued to work under Jennifer Granholm to create a plan that would draw filmmakers to Michigan.

Granholm approved the program in 2008, saying to Burnstein, “Tell your students.” The Michigan Film Office website lists over 30 productions shot in the state that year, including Clint Eastwood’s “Gran Torino” and Drew Barrymore’s “Whip It.” (For comparison purposes, five are listed for 2007.) ’09 was even better with over 40 films, including Oscar Best Picture Nominee “Up in the Air.”

Perhaps more thrilling to Burnstein and Granholm was the fact that, suddenly, film talent was staying the hell IN Dodge instead of running for the Hollywood Hills. But behind the scenes, the program was under attack. Much of the program’s criticism originated from the Michigan-based non-profit Mackinac Center for Public Policy, which contends that the Michigan Film Office has provided inadequate transparency in reporting just how much benefit the program provides. Following a March vote in the Michigan House of Representatives that will kill all film incentives along with the Michigan Film Office, Bill #4122 was ordered enrolled on June 18 of this year.

“It’s a catastrophe,” says Burnstein. “Because of the national stature of our screenwriting program, we are attracting students from all over the country, even from outside the country.  If we had a strong incentive program, they might have stayed. But now they’ll go where the filmmaking is.”

Schwartz is an example. The Michigan native has relocated to LA, where, along with a number of UM alumni, he’s off to an excellent start. And while he may have left the state, Burnstein continues to stay with him: “When I’m writing now, I still sometimes feel like Jim’s looking over my shoulder, counting the extra syllables.” Furthermore, Burnstein’s connectivity with Hollywood has helped Schwartz and many other students find jobs that help them get a foot in various production doors. “Unfortunately, I haven’t inspired any of my students to follow my example of living in Michigan and working in LA—not even my own kid,” says Burnstein, whose son now works in the business on the left coast.

In the face of the setback, Burnstein’s passion to help students learn the craft of writing a great story for film or TV shows no sign of diminishing. He’s just sorry the productions won’t be within easy driving distance.

To check the bill’s status and contact your senator, go to legislature.mi.gov, click on “Bills” in the left menu, and type in 4122.