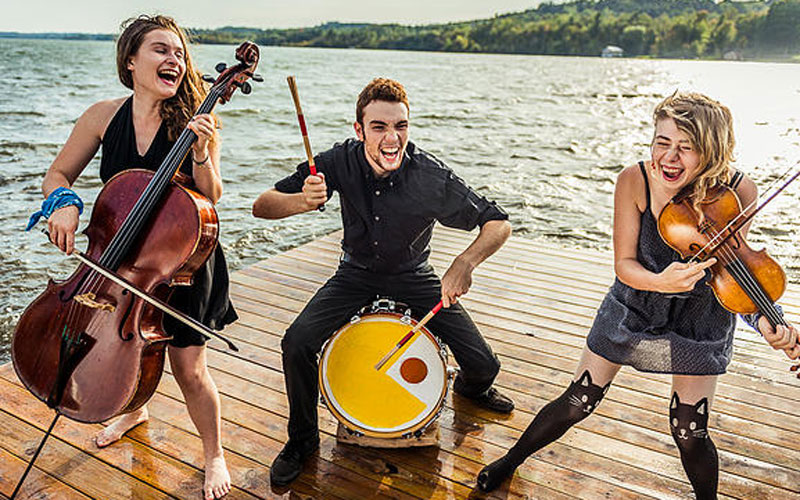 His website defines Ben Folds as “genre-defying.“ He’s most often referred to as a singer/songwriter/producer, his music described most often as rock, sometimes pop, almost always with the word “alternative” tacked on.

“When Ben Folds played the Ann Arbor Folk Festival in 2008, I had seen him perform once before, but was unfamiliar with his catalog,” says Jeff Reece, who since 2006 has served on the board of The Ark, the music club behind the Folk Festival. “To the shock of many in the audience—many who were probably less familiar with him than I was —he concluded his performance with a Dr. Dre cover, ‘Bitches Ain’t Shit.’ It starts with a beautiful piano solo and then morphs into something totally unexpected. I’ll never forget it.”

Anya Siglin remembers the moment well. Siglin serves as the Ark’s program director and in the same role for the Festival, the club’s  biggest annual fundraiser. “I had no idea that was coming, and kind of held my breath. But people loved it.”

Another favorite moment? Pete Seeger, “pretty much the guy you think of when you think ‘folk,’ he always wanted a singalong,” recalls David Rossiter, a member of local roots band Hoodang and former Ark board member. “Woody Guthrie’s granddaughter was in the audience, and she came up and sang with him, and all the musicians joined him. It was so moving.”

Folk is for the people

How can one festival encompass such a diverse range of artists and musical experiences? “Everyone has their own notion of ‘folk’—what it is, what it’s not, who plays it, what it sounds like. Kumbaya, anyone?” wrote Anya Siglin and Marianne James, the Ark’s executive director, in the Festival’s welcome letter which continued, “For The Ark, ‘folk’ extends beyond a specific sound or genre; it’s a wide spectrum of music” encompassing “traditional, contemporary; amplified, acoustic; vintage, emerging; familiar, edgy.”

So while Festival organizers are justly proud of the folk legends who draw crowds to Hill Auditorium in the dead of winter—and who play its  Main Street venue throughout the year—the club’s leadership is equally dedicated to continually “blow[ing] the lid off people’s little boxes of folk” and mixing it up with new and surprising artists. “We’ve battled people’s perceptions of folk because the word is so rich in our world,” said James. The tagline for the 38th festival, “50 folkin’ years,” is a shout out to the Ark’s five decades and its continued dedication to expanding musical horizons.
“All music is folk music,” said Joshua Davis, one of this year’s featured artists. “Folk songs are love songs, historical songs, or personal songs telling a story.”

“Folk means ‘of the people’,” said Alan Doyle, who, with his band The Beautiful Gypsies, will precede Davis in the Festival’s Saturday night line-up. In an accent lilting from his Irish roots, the Newfoundland native explained “Trying to define folk is foolish, but we’ll proceed anyway. It’s music that people would sing and play and know when they don’t do music for a living. It’s the song that Johnny  sings, and doesn’t know how he knows it. It’s the song you never sat down to learn.”

Despite similar philosophy about what folk means, Davis and Doyle play and sing very different music. Michigan native Davis, who did a stint on the TV competition, “The Voice,” is an American roots music historian with a musical heritage of blues, ragtime, and world music. Doyle, who’s previously appeared in Ann Arbor with his band Great Big Sea, will be accompanied by his new group on a rocking set spiked with healthy infusions of Celtic soul.

They’re preceding Ry Cooder, in a rare appearance playing with husband/wife bluegrass legends Ricky Skaggs and Sharon White. “I worship Ry Cooder,” said Davis, “I may not be able to speak when I meet him.” The final artist of the night, Joan Baez, will grace the Folk Festival stage for the first time. “She was scheduled to come a few years ago, and had to cancel,” said program director Siglin. “So we are thrilled to have her here at last.” Alan Doyle said he, “can’t wait to tell my parents I’m on a bill with Joan Baez. This will legit me for life.”

That’s just the lineup for Saturday, and only four of the seven acts. Executive director James emphasized that the festival is carefully curated. “It’s a full music experience over the two nights,” said James. “We work hard to make it a cohesive experience, and to offer people variety and really provide the full spectrum.” Planning the line-up begins almost as soon as the previous year’s festival ends, which Rossiter sees as a unique advantage. “Because you have to plan so far in advance, a lot of times you get artists who aren’t on tour, so you see them in a really different context. One time, Jeff Tweedy came without his band Wilco. It was him alone on stage with a bunch of guitars, not something you ever get to see.”

Each night begins with local talent; this year, the Ben Daniels Band will represent, helping to kick things off on Friday night. “This is a huge deal,” says Daniels. “We’ve played the Ark several times, and to have that short 20-minute set at the beginning of the festival is amazing.” He’s stoked to see City and Colour, the Canadian act led by Dallas Green that headlines on Friday following musical legend Richard Thompson and indie rockers Yo La Tengo.

Those tempted to skip the early acts and show up only for the big names are making a big mistake, according to festival-goer Richard van House, who encourages attendees to get the most from their tickets and show up before 6:30, the official start time. “It’s very long—four and a half hours each night—but some of the surprising ‘new’ entertainers play in the early sets so you don’t want to miss them.” Another fan, Binger S. Winchell, agreed. “It’s a real treat for me to learn about a new performer and the great news is that many of the acts will be booked to perform at The Ark later in the year.”

“There’s a secret ingredient in this region,” said Marianne James. “People really understand this music and love it and get it. Without that audience that loves and responds and supports the music, it can’t happen. The Ark is bigger than anybody who’s been involved with it. It’s a place people love, both the artists and the audiences.”

As the Ark’s biggest party of the year, the Ann Arbor Folk Festival is the perfect way to craft your own definition of this incredibly diverse genre.

“You’re in a warm place with perfect acoustics, and even though there are more than 3,000 people there, Hill Auditorium has this amazing feeling of intimacy, like you’re in someone’s living room,” said Rossiter. “In the deep dark winter, this blizzard of music is gonna lift your soul.”