From blogging to book-selling, Roy Sexton, VP of corporate affairs by day, has upped his hobbyist pursuit of reviewing films to perhaps the level of a second occupation. With a title like ReelRoyReviews: vol. 1: Keepin’ It Real, we could be on the lookout for a sequel.

How did the blog start?

My partner John and I see all kinds of movies, good stuff but plenty of dreck as well. I would write these two-sentence reviews on Facebook, and people liked them and wanted more. So I started the Reel Roy blog, and I would get, you know, 20 people reading my posts. Then I wrote about Wreck-It Ralph, posted it to Reddit, and suddenly I had something like 800 views. Now I write up all the movies I see.

How’d you decide on Open Books, your publisher?

They found me. My mom, Susie Duncan Sexton, is a very liberal feminist baby boomer in a very red state—Indiana, where I grew up—and she’d published two books with Open, Secrets of an Old Typewriter and Misunderstood Gargoyles. When Open wanted to expand, they got in touch and went through all the reviews from the site in a couple of weeks. It’s happened very fast.

When did you start watching movies?

I was an only child in a really small town with no cable. My parents would sit me down and say, “We’re going to watch Penny Serenade tonight on Channel 55,” or Gone with the Wind or Mr. Smith Goes to Washington. I thought it was torture at the time. But it taught me what was good and also to be open-minded about choices. 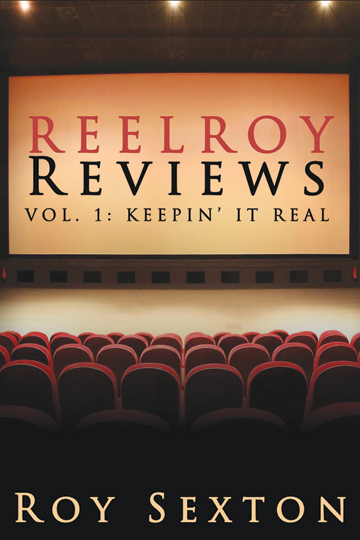 I actually have an MA in theater criticism from OSU as well as an MBA from UM. By day, I’m senior VP of corporate affairs for Trott & Trott [a real estate finance law firm].

I’m a sucker for pretty much anything by Spielberg and George Lucas, and I’m a big comic book fan, so I see all the comic book adaptations. When The Lone Ranger came out and everyone savaged it, I kind of felt like I had to try and save it. I loved The Lego Movie!

I like Leonard Maltin, he’s so concise, and of course, the old Siskel and Ebert show. I’m emulating Peter Travers, Owen Gleiberman, and Lisa Schwarzbaum. I revere Pauline Kael and David Thomson, but they’re kind of on the “everything sucks” end of the spectrum: their standards are so high that they’ll never be happy.

No! I mean, I have friends who are curators of their own lives, with their artisanal cheeses and craft beer. And here I am watching Flowers in the Attic. I’m not cool.

ReelRoyReviews: vol. 1: Keepin’ It Real by Roy Sexton is available on Amazon and from Open Books
(open-books.com).  Visit Roy online at reelroyreviews.com.