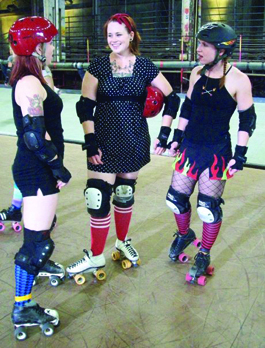 “It was 90 degrees, and we just had to lie down in costume and make-up in a filthy former steel warehouse and wait.” says Tracy Toepfer, a featured skater in the 2009 roller derby comedy-drama Whip It. “And then they’d bring in the prime rib.”

That’s about as bloody as things get in Ann Arbor filmmaking. In fact, filmmaker and professor Victor Fanucchi says, “I honestly haven’t heard any horror stories. Ann Arbor’s incredibly filmmaker-friendly.”

Filmmaker Barbara Twist seconds that. “My first thought when I hear some filmmaking nightmare is always, really? Couldn’t you see that coming? Everything is money. No one wants to be on a disorganized set.”

Toepfer watched the director and producer of Whip It, Drew Barrymore, rise to the occasion. “She was the first on set and the last to leave. She had this amazing positive attitude, always. So for me to complain was just absurd.”

That film was made in the heyday of the Michigan Film Office incentive program, one of the most aggressive in the US, which fostered a boom until mandated restrictions dramatically curtailed movie production. Now, films made for less than 100K don’t qualify for the program—and therefore are made by any means necessary, which was V. Prasad’s m.o. “I saw Lena Dunham’s Tiny Furniture made for 10K. I wanted to show my students they could do that,” says the U-M screenwriting professor. He based his forthcoming screenplay, Considerations, currently in post-production, on articles he’d seen about female students financing their educations via sugar daddy websites.

He and Twist initially relied on Kickstarter for funding, and he was extra cautious before launching production. “I’m the opposite of the ‘just do it’ school of filmmaking. The script had to be bulletproof, casting perfect, which would make it pretty hard to screw up with my directing.”

Fanucchi agrees. “You’ve got to check and recheck that you’re solid. You may not be able to muster all the same people if you have to reshoot a scene.” For his 2010 movie Art House, careful preparation resulted in a remarkable coup: “My co-writer, Kris Brown, had recently heard of this incredible young actress at SXSW in Austin.” She was Greta Gerwig.

While Whip It worked hard to disguise Ann Arbor (as well as Ypsilanti and Detroit) as the fictional town of Bodeen, Texas, Consideration and Art House feature the city loud and proud. Location hunting and securing are possibly more about networking than about permits, a nightmare to obtain in many places. “You’ve gotta know someone who owns a bar, works for a bank,” says Twist. “If you ask, a lot of times people don’t want anything in return.” Fanucchi based Art House on the Black Elk co-op, and filmed the movie there and in the Arb, among other Ann Arbor spots. “As long as we promised not to disturb things and go in with a small crew, they were fine with us.” For Consideration, snagging most locations for free allowed budget to pay to rent the Michigan Theater for an integral scene. Other settings were skillfully faked. “We could film the outside of the Gandy Dancer from the street, and I really wanted the valets,” says Prasad. The inside of the restaurant was actually shot at the Last Word on Huron Street.

After production, the hard work of distribution begins. Prasad and Twist are working with Seed & Spark, who Twist describes as “blowing up” as a great source for indie filmmakers. She’s already involved in her next productions, one of them a short with Fanucchi. Fledgling film crews are encouraged to get involved. “It’s so informal,” says Fanucchi. “Be generous with lending a hand when people are doing things. Film productions of any size can always use some help. People get to know that they can count on you.”

Whip It and Art House are available on DVD. Keep posted about Consideration: facebook.com/considerationfilm

To learn more about financing your own film,