Hitchcock’s Most Stylish Comedy Explodes Onscreen at the Michigan Theater 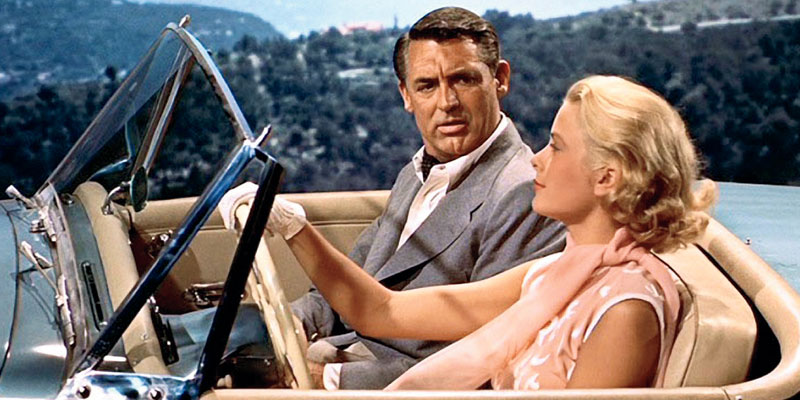 It features one of the most iconic love scenes in cinema history: Two beautiful people melt into kisses as fireworks burst in the background. To Catch a Thief, Alfred Hitchcock’s 1955 crime caper filmed on the French Riviera, plays at the Michigan Theater in all its VistaVision glory for two showings the first week of September. Here are a few reasons to skip the home video version and make the trip downtown to our local movie palace.

Hitchcock’s entire philosophy of film was, in his words, to “fill the white rectangle with a succession of images.” He detested what he called “photographs of people talking,” and believed passionately that every shot should deliver maximum visual, and thus emotional, ka-pow. To Catch a Thief is a master’s level class in filling the frame and true appreciation is best achieved on the Michigan Theater’s big white rectangle of a screen. As you watch, notice how often the story foregoes dialogue or slips into muttered, unsubtitled French. Words don’t fail; they just aren’t necessary.

“Thief” was Hitch’s third picture with Grace Kelly, who not long after would retire from the screen forever to marry a prince. Her first collaboration with the director, Dial M for Murder, reveals just how annoying Ms. Kelly’s reedy voice and nearly expressionless face can be. In Rear Window, the actress flounces around in a series of glorious Edith Head outfits without either detracting from or adding to this greatest and darkest of thrillers. In “Thief,” paired with Cary Grant at his most urbane, the famously glacial Kelly finally thaws into a sassy ice cold drink of champagne with killer comedic chops. As oil heiress Francie Stevens, she relishes everything from scaring Grant witless with her reckless driving to tearing into a chicken breast like a ravenous kitten.

I’ll See Your Double Entendre and Raise It

Speaking of chicken, it’s just one of the sources for a number of innuendos that can almost make you pine for the production code, which forced writers to be sexy without ever mentioning sex. The banter between Grant and Kelly, courtesy of screenwriter John Michael Hayes, barely masks two cantering libidos. Equally fine are some of the exchanges between the actor and Brigitte Auber, a soubrette in a speedboat, and the marvelous Jessie Royce Landis, who plays Kelly’s mum to louche perfection. Just watch how Landis handles a blameless poached egg.

The Wonder of Technology (and How to Beat It)

VistaVision, a non-anamorphic follow-up to Cinemascope and precursor of IMAX, had only become available to filmmakers in 1954. In a 1970 interview for the American Film Institute, Hitchcock told George Stevens, Jr., that when the front office at Paramount saw a film shot with the technology, “they were overwhelmed and ecstatic that a hand in the foreground was sharp as a figure half a mile away. And what the hell that’s got to do with picture making, I don’t know.” Nonetheless, he agreed to use the technology for “Thief,” though he still shot the way he wanted to shoot, including soft, swoony close-ups as needed. A high-ranking suit complained that the close-ups were blurred, insisting that “in VistaVision, everything is sharp.” Hitch simply got word “to each cameraman on the lot….to pile up more light to make everything sharp, so as to continue to deceive the front office.”

In the AFI interview, Hitchcock claimed, “I’m not interested in content at all. I don’t give a damn what the film is about.” The story of “Thief” couldn’t stand up to a puff of wind. Who cares? It sparkles and glints like the summer sun on the Mediterranean. When beauty, wit and jump scares are flying at you this fast, you’d be a crazy curmudgeon not to sit back and enjoy the ride. Especially if Kelly’s behind the wheel of her lapis lazuli convertible, ripping along the corniche at speeds that can hurtle you into something that feels a lot like love.