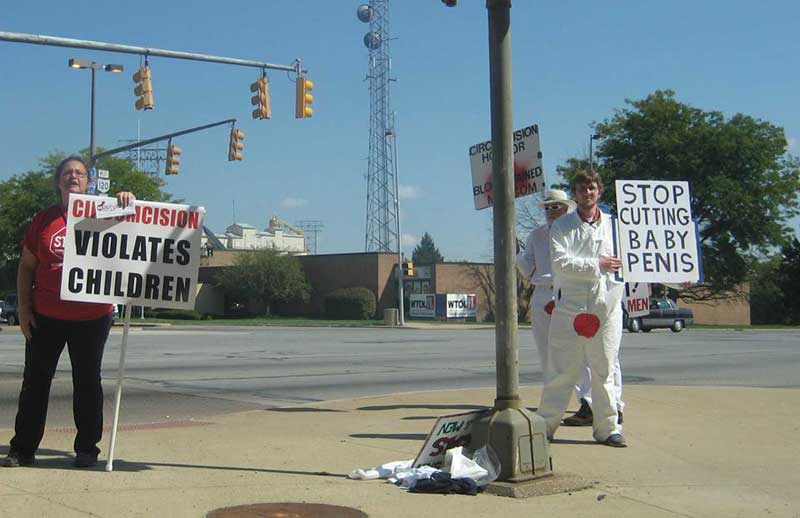 In Michigan, well over half of all baby boys have their first surgery before leaving the hospital.

“Circumcision is the only surgery you can do without a state license,” says Norm Cohen, director of the National Organization of Circumcision Information Resource Centers of Michigan (NOCIRC). The non-profit helps to educate parents and healthcare providers about routine, non-religious infant circumcision.

The event coincided with the release of a report from the Center for Disease Control (CDC) recommending circumcision based on studies which prove significant reduction of HIV transmission. However, guest speaker, Dr Robert Van Howe, Professor and Interim Chairman of Pediatrics at Central Michigan University College of Medicine, questioned the data used.

He asks, “Why did the CDC wait years after the study it used to publish its findings? And why is there such a disconnect between the CDC and the medical literature in Europe, Australia, and New Zealand?”

In Europe, Australia, and New Zealand, non-religious circumcision rates are low to non-existent, without a corresponding spike in STD transmission. Additionally, Van Horn points out that protection from STDs becomes important only after sexual activity begins. “If you’re really concerned about your son catching STDs, invest the money that the OB will get for performing the circumcision in a savings account. By the time your kid is sexually active, he can buy condoms for life.”

“It’s quite an extraordinary surgery to be doing on children,” says Cohen, who began to research circumcision when his son was still in utero. A non-observant Jew, he experienced familial and cultural pressure to have the operation performed. But he found that surgeries can be botched, with excessive bleeding and infection potential complications.

NOCIRC also contends that circumcision-related problems may not surface until the circumcised party becomes sexually active. John Geischecker, Director and General Counsel for Doctors Opposing Circumcision and co-presenter at the event has practiced medico-legal law as an arbitrator, mediator, litigator, and law lecturer for over 30 years. He says that it’s extremely difficult to legally address any malpractice because the issues arise so many years after the fact.

Cohen has been involved with NOCIRC’s Michigan chapter for 20 years. “We do everything from peaceful street protests to conferences.” He says that mothers are often the most receptive to the information. “For other family members, it’s easier to give advice about what new parents should do, and say things like a boy has to look like his father or like other boys.”

“The pendulum is swinging against circumcision, but very slowly,” says Cohen. California’s rate of non-religious circumcision is currently 22%; Michigan’s is 84%, one of the nation’s highest. (Certainly, the latest CDC report could cause the pendulum to reverse yet again.)

Anti-circumcision advocates look to breastfeeding as something of a precedent. Actively discouraged by much of the medical community for a fair portion of the 20th century, breast milk is now recommended as the exclusive food for infants up to six months old by the World Health Organization (WHO) and the American Association of Pediatrics (AAP).

While the analogy to breastfeeding is accepted, one to recent anti-vaccine efforts isn’t. “Vaccines have been proven, again and again, to work,” says Van Horn. “In every study done to promote circumcision, the numbers don’t add up.” NOCIRC encourages parents to educate themselves on the options for their newborn sons. Go to nocircofmi.org to get in touch or find out more information.