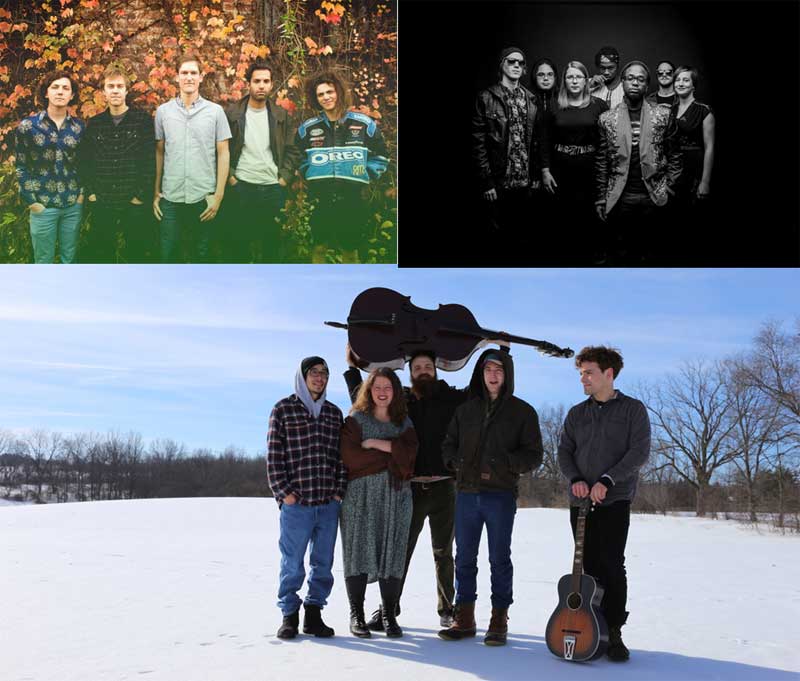 Okay, so…. A few minutes after I submitted my column, last week, having listed “Bands To Watch In 2015,” I then heard the songs of Wych Elm. And so, I immediately realized I needed a Part 2.

This local quintet blend chorale folksongs and psych-country twang with a bit of classy baroque dusted up by the stomp of stringband barn dances. Take a listen….

Whimsical melodies blushing with multiple harmonies, heaved by 2-3 or more vocalists at once to evoke the sense that you’re in the room with them. The lead vocal is often traded between members, similarly, the instrumentation is mixed up from song to song. Banjos, harps, acoustic guitars and stand-up bass and… what sounds like a mandolin! Daniel Ackerman, who plays guitar, keys, drums and sings, calls Wych Elm’s beguiling brew “…porch-country…”

The band formed in summer 2012 and would often play out on the shaded porch of Vali House (a Kerrytown Co-Op) for its optimal cool temperature and open air breezes. The community oriented atmosphere of the Co-Ops heavily influenced their approach to music. The band features Rachel McIntosh on lead vocals/guitar, while Ackerman, Max Hernandez and Colin Mercer each playing banjo, guitar and mandolin while also singing. Charlotte Crosmer is on fiddle while Charlie Reischl plays bass. They may also employ harmonicas, washboards, kazoos and, yes, cow bells, into their strummy/singsongy balladry.

“Sometimes we spend hours practicing harmonies, sometimes we just shout,” said Ackerman. “But that sense of group participation, even when it becomes reckless and chaotic, is at the core of the band.”

The jangly strum of the guitars, the rooting-tooting western-stung vibe of their rustbelt-wrung Americana, conjures something of the old world, while still sounding distinctly of the present, if not, stranger and playful enough to possibly be opening your ear you to some visionary future of folk… or, as Daniel puts it, their vision of “pseudo-traditional string music.”

Approaching their three year anniversary, Ackerman said it’s “…obvious we’re still haunted by the affectionate ghost of ‘porch-music.’ Even as we incorporate electric instrumentation, the mindset we built on that porch still directs our style.” Did I say it felt whimsical and playful, already? “Often, bands with acoustic guitars try to be intellectual in some way, but…we try to stray from that,” said Ackerman. They aim, instead, for “a sincere immaturity.”

“We wanna generate our own weirdness,” Ackerman said, admitting that they “…owe a lot to traditional music” but are so far removed from it with implementing keyboards / electric guitars  and a drum kit that they “…could never be true to it, ya know?”

He drops iconic names like Woody Guthrie, the Stanley Bros., Dylan, Neil Young (even the two latter singer’s “bad records” have played an influential role for Wych Elm). But what Ackerman’s implying is that Wych Elm’s signature is singing in “…the voice of the vulgar storyteller… We lack the social skills to be old-fashioned storytellers…(with) statements spoken from a voice that is only certain that it is uncertain, instead of taking a ‘know-it-all’ tone like Leonard Cohen or Bob Dylan. ‘We know what we know, but what we really know doesn’t make that much sense.’”

Anyhow. They’re a band to watch! They’ll release a new record this year. And, they perform at The Blind Pig on Friday evening with The Landmarks.

And the Landmarks, for that matter, are another band that I regretted leaving off of this big ol “List” of mine from last week, since I’d started listening to their music early in 2014 and have mentioned the quartet on this column a couple of times. Here, take a listen:

Sleekly upbeat indie-rock given this dark, mysterious shade by celestial synthesizers and chilled guitar tones, with lead vocals striking a stylish quaver through the choruses in a weary warble before the pressing guitar riffs burst into a neo-space rock crescendo. Glimpse them in rehearsal mode from this video they dropped early in the New Year.

But if indie-rock and “porch-country” are not your cups of tea, then I have one more band to add to my 2015 list: Kalamazoo-based hip-hop collective, Maraj. The multifaceted group, with two MCs, a bassist, two beat producers, a bassist and two singers, was formed out of the verdant Double Phelix community. The group’s layered tracks aspire beyond traditional conceptions of rap or hip-hop, blending in impassioned soul, empowering funk grooves and a bit of rock n’ roll’s edge.

Check out their new music video, below. A sensational sampling of world-music and churning bass grooves over hip-hop beats and an anthemic chorus, you’re locked-into the groove almost instantly with that chorus caught in your ear for hours after…

Our ears are also set.