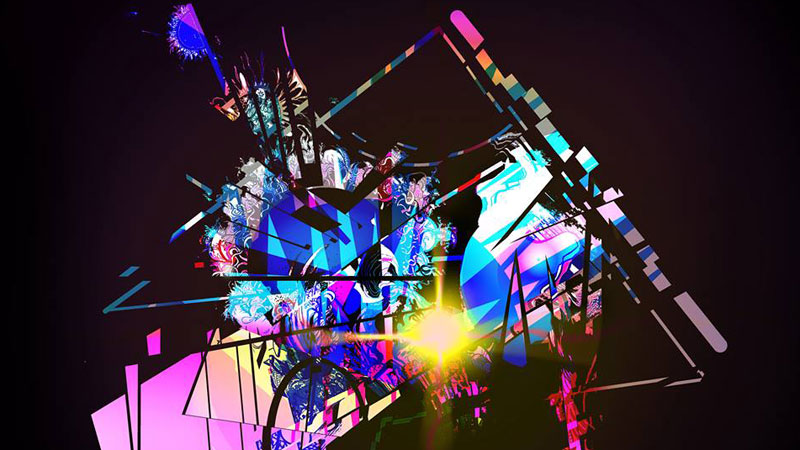 Local guitar sorcerer Storm Ross is releasing his third full length solo album on October 14. Fans of experimental indie-rock will recognize Ross as ¼ of the Arbor/Ypsi outfit Skeleton Birds. Two years ago, my mind kinda melted all over the page provided for these online columns, when I waded into the ultraviolet whirlpool of his previous The Green Realm.

Now, Ross is premiering the 2nd single from Welcome, Sunshine; check out “Atheon.”

Ross has become a post-metal maestro, suturing more caustic tones and frenetic statements onto rhythmic arrangements that skew to the anthemic hard-rock, while synths delve into drone, new-wave and post-psychedelic spirit-journeys. A declarative sax chops in, wobbles and settles into a simmering glide, atmospheric synths tide their way in and our breathing regulates. Then the guitars just lose their shit and start surging again, right around the 5:20 mark. The drums, they lock into this terrific groove; it’s doomy and foreboding, but yet apt for a shuffle of the shoulders, a meditative head-nod…an ideal bedrock for all these esoteric expressions.

“I set out to make a record about the day-to-day,” Ross said. “Or the almost-mundane anxiety living in 2016. The song ‘A Life of Passwords’ is about the numbing effect of technology. ‘I Will Try to be Better’ deals with the depression that settles in whenever you feel you can’t live up to that promise. The light is (the album’s opener), ‘We Need to be Fugazi Now More Than Ever…,’ because every profile of Fugazi inevitably discusses how they chose not to engage with the practices typical of the mainstream music business. I feel a lot, not all, but a lot of our problems as a society could be solved by such simple decision making. Thus…the song.”

The intonation is tremulous, the rhythms crash and crest, the analog synths churn and drone and not a word is sung or spoken, yet you sense a surfeit swell of emotions. What seems like fury, some kind of cathartic tempest, incrementally billows its way into some uncanny beauty; some extemporary soloing saws into the soundscape with axing heaves and warrior lunges only to pare back the distortion into 16 or 24 precious measures of ornate melody, making it feel and sound like a rumination, an understated revelation, the clear-eyed focus found amid the blur, the perfect toed-pirouette struck with poise amid a spell of somersaults.

A phrase or a certain guitar lead always sets the tone and the drums trounce us forward, but then the real statements, slithery and elastic, quietly angry and pensively yearning, lash and thrash in this jazz-like whirl that sonically intimates a desire to derive some kinda peace. Yeah, peace…despite how cacophonous those elongated crescendos become…this stuff makes me feel at peace.

I probably drove my rambling point home several sentences ago… The instruments are quaking in such a way where it feels like the ground beneath you is cratering-away, until a tender drone or a sweetened guitar tone glissades over you to where you feel saved by sudden levitation. (No, I’m not on drugs as I write this…)

Ross’ collaborators on this latest album include Jeremy Edwards (also of Skeleton Birds) is one of Ross closes friends, playing drums while also recording and mixing these songs. Andrew Bishop played both tenor and soprano saxophone; Ross’ wife, Amanda, was on keyboards and Tim Flood played bass. “Bringing them in changes the end results,” said Ross. “Typically, I play songs solo before I record them and they’re pretty set. However, when it’s time to bring others into the mix, I tend not to dictate to them what to play; I’m looking for their interpretation of what they hear going on… “

This approach leads to the “black metal of ‘Atheon’ becoming more krautrock, and the more sweeping and epic feel of ‘You Will End’ mores into a quick jazz freak-out. And, it’s yet to disappoint me when my music radically changes due to the contribution of others…”

I hope my contribution of mind-blown-interpretation and aesthetic appraisal also didn’t disappoint him… You can listen to previous albums, as well as another single from Welcome, Sunshine at:
https://stormross.bandcamp.com/ And, follow at: https://www.facebook.com/stormrossmusic