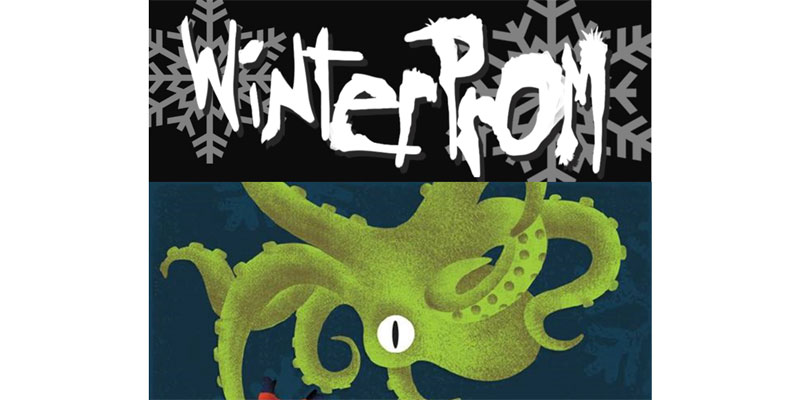 I keep hearing how this is going to be a “mild winter,” but I’ve lived in Michigan too long to relax my mitten-clenched vigilance. Best case scenario: it does wind up being a mild winter; worst case scenario: we remember that it’s likely due to the El Nino effects from the west coast of South America that have been disturbingly augmented by climate change which means it could be the end of the world as we know it (and I don’t feel fine).

That said, whether it’s dreading the apocalypse or just perfunctory grouchiness over what still could obnoxiously prove to be a cold Michigan winter, there’s nothing that eases my woes like a mini-music festival. And I’m not talking about the typical 3-band bill in a bar on a Saturday; I’m talking about a substantially sizeable lineup of musicians enthusiastically gathering together in a gala-like soiree that celebrates local music. I’m talking about a Winter Prom.

This is a nicely gnarly lineup of avant-garde groups re-imagining some inherently rough-around-the-edges genres and finding some sweet spots of noisy eureka.

Take CrochetCatPause, taking me back to the seminal days of Terrible Twos (only splicing in a bit more synth-pop melodies).

Or, there’s Watabou, with tidal glitches cresting constantly over a delightful din of cheery synth chimes, pitch-shifted vocal loops and honeyed vocals. But, some of his other tracks can get a lot more zestfully freakier than this one….)

Crossroads Presents an Ypsilanti Winter Prom, featuring: CrochetCatPause, The Ultraball, MuscleBaby, Speed Weed, Watabou and your host, The Elegant Dedman, Brian R. Tucker. Might be a magician there as well, who knows? The ideas, folks, is to indulge a bit of nostalgia for this type of pageantry and consider dressing up to lift the spirits around this darker/colder/bleaker time of year. What if you could relive (and re-rock) your prom? Here’s your chance… MORE INFO

The guys behind Gangplank Records used to host a swell lil’ sweater and scarf party at what used to be known as The Magic Stick, called The Sounds & Spirits. It was a throwback to ol’ Rank & Bass Claymation Christmas days, with good time yuletide cheer and special surprise guests. That said, the whole point of those concerts was to raise funds for COTS (Coalition on Temporary Shelter), a nonprofit organization aiding and assisting the area’s homeless population.

Gangplank continues the Sounds & Spirits tradition of benefiting COTS with its latest holiday concert incarnation, Saturday at the Loving Touch. Dan John Miller (of Blanche) will perform, along with Augie & The Heartless Sons, (you might remember Augie from his other group, The Hard Lessons). Also on the lineup: Duende, The Blueflowers, American Mars, LaSalle, Old Empire, David Bierman Overdrive, and Touch The Clouds.  MORE INFO

Next Thursday (Dec 17): A Holiday Hootenanny!

What’s just as good as a Prom? How about a Hootenanny! Chris Anderson is working on what might be his fifth or sixth festival of the year (I’ve lost count, personally). Anderson’s label, Intellect Records, is hosting a holiday-themed Hootenanny at the Club Above (situated above the Heidelberg). The show features Pan The Musical Goat, Arian Monceaux & Dylan Beckwith, Once United, Antonia Moses, Gillie and the Freemen, J. Washburn Gardner, The Vagrant Symphony, Nadim Azzam, Ada Z and Trinity Gahm (Two Stages / Non stop live music) MORE INFO

Listen: Gillie and The Freemen