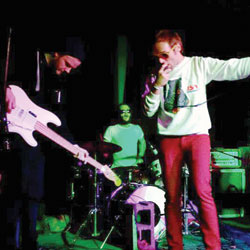 There is a new, weird kind of synth-rock simmering just off EMU’s campus, seeded in Mac Davis’ basement and blooming in Spur studios. “Not knowing nothing, not knowing me,” sings the Milford-born, Michigan-raised, one-time Pittsburgian pop-appreciating punk-reared experimental singer/songwriter and multi-instrumentatlist on a new song called, tellingly, “I have no idea…”

I have no idea how to sum up Davis’ fledgling full-band project Night Beast, considering its key contributor (Davis) credits a dizzyingly varied blend of genres influencing his recent songwriting. That he captured Night Beast’s preliminary productions via “lo-fi” (8-track cassette) and that his introduction to underground music was through Black Flag’s Everything Went Black could imply his tastes lean towards, well, you know: “punk…”

But beyond “punk,” he counts: “post-punk, no-wave and psychedelia to three-chord pop, garage-rock, electro-funk, be-bop…even big-band, dance, disco-italia…” as influences.

Fatefully, Davis caught  the ear of fellow NuWeird-rock-rooter Nick Zomparelli, who expressed interest in helping to flesh out these jams via his skills on drums. One thing leads to another, as these rock-origin-stories often go, and Jim McGree, Davis’ ally from another punk project (Eat Meter), took interest and offered his recording skills/equipment and  keyboard proficiency. Now you’ve got a band.

So what’s it sound like, really? A provocative new-wave groove, with a dissonant punk-vibe dashed with uncanny grace, consistently palatable with  surefire pop-hooks. I mean, that’s what it sounds like now, anyway.

Davis is one component of a new sensibility taking shape in local underground rock that includes various other acts some might  unfairly tag as “punk”, yet which distinctively infuse their  works with  spices ranging from  tripped-out psychedelia,  to provocative no-wave and charming throw-back 50’s pop.

Says Davis, succinctly: “There are a lot of us weirdos around here.” Chief among those would be Ferdy Mayne, a band fronted by folk-fraying songwriter Shane Firek and featuring Davis, Zomparelli and Brad Hale. Bad Indians, Chit-Chat, and Congress are three other key contributors to the NuWeird rock, noted by Davis as “…bands more interested in experimenting and pushing boundaries of what can be done with pop music, rather than with trying to be so precise or writing pretty arrangements.”

Night Beast came down to “making something that I felt good about and could enjoy for myself. There was no intention of performing.”

And yet, they’ve now got four official shows under their belt, fleshed out as a 5-piece with Hale on guitar and Steve Bowman on bass. The shows were, says Davis, “to my surprise, great!”

Meanwhile – the Electric Six are going to be launching their first tour of 2013 here in Ann Arbor on February 14th – who else would you spend Valentine’s Day with other than a half-dozen sweaty, dance-punk dissidents?

The Six recently marked ten years since their  “break-out” single Danger! High Voltage with a live compilation capturing bits from 2012 springtime shows in Minneapolis and Chicago. Absolute Pleasure is essentially a ‘best-of’,  following-up the synth-centric Heartbeats & Brainwaves LP (2011), which was their most progressive / experimental album to date. Swing by and dig their new (and, yes, old) jams.