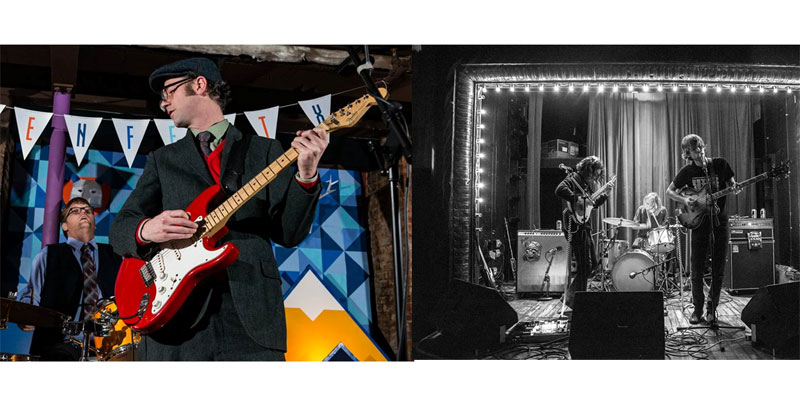 Hey everyone. It’s about 94 degrees as I type this and even as I continue typing this sentence I realize that it’s quaint, customary, and probably grating to open these columns with chit-chat about the weather. But then, as this third sentence began I remembered that I wanted to launch this column off with an exuberant toasting to the start of summer! The solstice was last Monday. Shorts, sandals, whatever you like… It’s optimal weather to get out of your house. Why not use those ventures to veer toward venues…

The Heaters visit the Blind Pig tomorrow night (Friday). This Grand Rapids based trio may be on the west coast of Michigan, but their blends of surf-rock swells and psych-pop surges sound as if it could be even farther out than that, like the actual sun-splashed sonic crests of a Californian collective. The band’s been together just three years (if that) but they’ve gotten a lot of material arranged for what’s already been a hefty amount of touring, and they’re getting ready to release their 2nd album in August.

Baptistina comes out August 5th, on the band’s own label, Beyond Beyond is Beyond. They were finishing up earlier this year, right around the time they were getting ready for their first tour of Europe.

“Yeah, we recorded it right before we left for Europe, so it was kind of tricky not being around for mixing and stuff and not being able to go back and tweak shit,” said bassist/singer Nolan Krebs. “But I also feel like that made it more personal, we wrote and created some parts of it very much in-the-moment. We also knew this time around we wanted to make something heavier, though. The bands that have really stuck with us lately have been louder, more intense stuff. WAND always comes to mind.”

Krebs said that any time a band makes it through the album-creating process, they always have a better idea of what to do next time around. “So we're just continuing to work on new stuff with this kind of heavy, cosmic vibe that we're into right now!”

Heaters are joined by Detroit-based indie-rock singer/songwriters Stef Chura and Evan Haywood, along with the mysterious Broccoli, or Dr. Broccoli. The show is presented by Nu Lo, an initiative to promote environmental non-profits. More info

Gregory McIntosh’s songs often evoke that sense of having just been in a storm, a downpour. My mind goes to a summer’s thundering where the sky’s almost green as the sun’s fading over the horizon and you find shelter, but your heart-rate’s up and your ears feel like their softly ringing. Yeah. There’s something elemental about it, the thrum and rust to his voice when he creaks high into those crescendos, the vigor of the guitars with those cathartic strums, the soothe of those harmonies helping it all find some shreds of solace.

Loose Teeth is an ensemble of longtime Ypsi/A2 players, with McIntosh on lead vocals/guitar, Matt Jones on drums, Mary Fraser on keys and Tom McCartan on bass.  You’ll recall McIntosh from his effectively poignant contributions to Great Lakes Myth Society, along with other groups (like The Reconstruction, and more). What’s exciting, for me at least, is that Loose Teeth is an opportunity to see McIntosh, who’s contributed to (or collaborated with) so many other projects, showcasing his signature songwriting style. His voice and his lyrics lay the soul bare and his melodious cadence tumble with a bracing restlessness.

MEANWHILE… over in Detroit this weekend…

Bear Vs Shark, the Ann Arbor-born agit-pop outfit that redefined post-hardcore in the early 2000’s, reunited last month in the build-up to NY-based Equal Vision’s September reissues of their two beloved albums. They’ll be playing at Third Man Records in Detroit at 7:30pm on Friday (info).

Also, Ypsi quartet the Landmarks will be in Detroit, playing with Go Tiger Go and Trancers at the Old Miami. (Info). And, Mountains and Rainbows will be celebrating the release of their double album, Particles, on Friday evening at El Club. (Info).