Singer/songwriter Kat Steih experienced such illumination during her time here in this corner of the state that it’s fitting her new full length album has an inspiringly Michigan-centric title. Kat was born in Michigan but lived abroad as a teenager.

After high school, she would spend time living in Ohio, but came back to Michigan, here in Ann Arbor, to major in Performing Arts Technology (& Physics) at U-M. After that she had a stint off in Denmark but has since returned again and put down roots here in Washtenaw County, which she claims as her true home. “I like the fiery, catalyzing energy,” Kat said, of the local music/arts scenes. “People here pursue life with a lot of passion. I’m always able to learn and experience new things.”

Kat’s new album, Hymns of the Huron, is coming out next month, with a performance celebrating its release on Sunday, September 15, hosted inside the space that helped produce it, Willis Sound Studio. Kat worked closely with musician/producer Ben Lorenz on arranging the songs, along with engineer Jim Roll to help mix and Christopher Goosman (for mastering).

“(Lorenz) and I knew that we wanted to make a record that focused on my voice,” said Kat. That’s why they used a special vintage ribbon microphone from the 40’s, and further augmented the resonance of her dulcet tones with a special plate reverb effect. “These two pieces of equipment are iconic in music recording history and brought my voice front and center; it really made it sound fantastic.”

As a songwriter, Kat is distinguished by her attention toward fostering connections: there are, of course, thematic connections between the lyrics that fill the melodies of her songs and her emotional anchoring to her family, her upbringing (and to Washtenaw), but there’s also the sense of connection that her listeners can find through the resonance they feel between the experiences she describes, and their own stories. Kat likens these quiet or internal revelations that can be catalyzed by the intimate exchange of songwriter and audience to something that French philosopher Gaston Bachelard called ‘poetic moments.’

Beyond that, Kat also cultivates connections to next-level knowledge by way of her other role: as a teacher. “I see teaching as what I was born to do,” she said. “Every struggle in my life has made me into a better teacher for others: my journey with vocal health; understanding fear and how to live with it, and learning how to open up to be creative and trusting with others.” Kat said that she felt like a “lonely creative” for much of her life, but that her time at U-M was an “earth-shattering experience” where she not only attained the know-how for producing her own music, but met and befriended other musicians, entering this “new world of creativity and ideas.”

This path led her to the Neutral Zone in early 2018, Ann Arbor’s safe/welcoming inspiration echo-chamber for teens/youth, providing outlets for (and developing/educating) their creative skills and opportunities. “The NZ is revolutionary,” said Kat. “What I do, is support young music scenes and musicians with the knowledge I’ve gained from experience. In the US we deserve organizations that support artistic expression, because these organizations give people a reason to live.” Kat has recently become heavily involved in the Women in Music Production group and the MC Workshop.

Beyond NZ, she’s established the Kat Steih Music Studio to provide individual lessons that hone fundamental songwriting skills, as well as flourish a creative music/movement educational project with a group component that emphasizes vocalizing, improvisation, and sensory experiences through music. That got us asking Kat about her own songwriting…

“I’ve written a lot of music in my life about alienation, striving, love & love-gone-wrong. (Hymns of the Huron) was written more from a place of stillness, and looking at the sources of these feelings.” Before, she said, her songs were coming more from a place of autonomy, “…woman as an island…” whereas this album embraces a sense of place, “…which is a first for me.”

As indicated earlier, Kat had to overcome a range of fears and apprehensions about the vulnerabilities that come with not only putting feelings down upon a page, but also performing those songs and then allowing other collaborators into the proceeding stages of creation. Something else she had to overcome was vocal surgery in 2016, after previously being diagnosed with pre-nodule swelling, causing tension upon the vocal cords. Her voice went from “being forced, to very bedroom-like, then to a natural, embodied performance. I’m very proud of this, and happy.”

When it comes to Hymns of the Huron, Kat said “…these are folk guitar songs, with a modern edge to them. I wanted it to be a classic album, and one that conveyed the stories of love, desire, and human feeling by staying true to the openness of the songs.” Up to this point, Kat had written, performed, and recorded as a solo artist, but a full band breathed life into her new songs, manifesting a “folk-rock” aesthetic but also adding “some grungy, atmospheric touches” with nuanced distortion and reverb. Musically, she wanted to combine the primary stylistic influences that have stayed with her since childhood, bridging folk and rock.

The lyrics are heavily influenced by Kat’s reflections on her family’s Midwestern German Lutheran heritage, and on the set of cultural values she inherited from earlier generations of her family. She says that Hymns of the Huron is meant to be a collection of healing songs that recognize the “shadow side” of our personalities.

Notably, Kat was also influenced by a book called “The Dance of Connection,” by Harriet Lerner: “…which discusses how telling the truth to your family can heal all sorts of old wounds.” Amid meditative walks through the stark peacefulness of Ypsilanti’s Highland Cemetery, she sorted a combination of feelings and “looked realistically at my past.” This, and several other ‘poetic moments’ have been tenderly woven into the songs that Kat recorded with Lorenz last year at Willis. The biggest motivation, Kat said, is to fully experience these “magic moments of creation.” 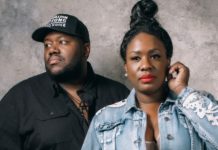