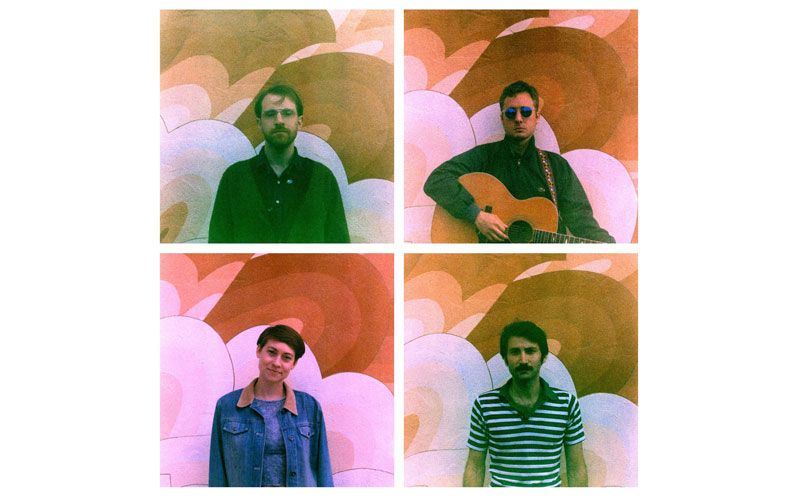 Frontier Ruckus just wrapped their fifth full-length album and recently began an Autumn tour, stopping back home in Michigan this weekend at Blind Pig in Ann Arbor. It’s been yet another year of evolving, a year of change, a year of meticulously honing their signature un-folk style and their curious 90’s college-rock-radio reminiscing.

Frontier Ruckus toured as a trio during parts of 2013, with singer/guitarist Matthew Milia, banjoist David Jones and drummer Zachary Nichols supporting their most ambitious work to date, with the double LP Eternity of Dimming. But singer/bassist Anna Burch (who had worked with the group back in 2010), soon re-joined, solidifying it as a quartet for the last two years.

When Milia relocated to downtown Detroit during Dimming, he was already far along with the writing for what became Sitcom Afterlife (released in November, 2014). Sitcom, their fourth and most lithe LP showed an uptick in brio (and some uncharacteristic brevity, at points,) yet still stoked their proclivities for an uncannily alluring wistfulness, wending lush layers of minor-keys from austere instruments under a patchwork of road-trip-propelling riffs and horizon-beckoning melodies tickled along by Jones’ incomparable banjo and Nichol’s staggering string arrangements.

Their fifth album, which comes out in November, was recorded in Nashville with Ken Coomer (Wilco’s founding drummer) co-producing. This was a first; they’d never recorded outside of Michigan, nor had they ever enlisted anyone outside the band for production work. The title is tentatively Enter The Kingdom, but Milia made sure to reiterate that this is no certain.

Now it’s one thing for a band to devote itself to consistently topping their most recent record, but what happens when they’re five albums deep after their veritable debut—an exceptional head-spinner of a song-cycle—was already hailed by many to be one of the best of a decade…  Milia spoke with Current about the new existential (and therapeutic) vantage offered by this fifth album.

Milia, as a songwriter, plucks and flutters a vast vocabulary of evocative phrasings like daisy petals to the breeze, but they can land like cinderblocks. He refers to these “fun little triggers” that he enjoys employing as a writer; lyrical utterances that, like a well wired detonator, cause explosive quakes through the viscera, form nostalgia-drunk brains capsizes on its dopamine and then cause the nerves down our arms to feel the pangs from all the hands we held of lost loves. Our shoulders hunch at all the Autumn chills of a time (an ever unspecified time) of our not-so-long-gone youths. He’s also going to talk about “connotative luggage” when he uses sweat pants, craigslist and broken Sega Genesis consoles to augment relatable stimuli in his poetry.

Current: Tell us more about the practice of effecting something, through songwriting, that sounds intangible, something mythologized from memory, something as richly or opaquely rendered as a Rimbaud rant, yet sideswiping it into the immediate present with specific references like NFL broadcasts or brands of soda or specific locations.

Milia: My nostalgia is wrought with branding (laughs). I think the degree of specificity in my writing has, on a whole, intensified over time, but really apexed with Eternity of Dimming, where that sort of zoomed-in focus on domestic minutiae was very much the intention. I don’t mind writing a little more generally these days because I’ve gotten a lot of that out of my system on earlier records, but, also, to write more generally yet in a way that is still interesting is, in itself, a compelling challenge. Still, sprinkling in hyperspecific details, whether real or fabricated, crates these fun little triggers of gratification for me as the writer. It’s a paradox that adding unambiguous particulars can somehow heighten the reality or relatable nature of something. I had a creative writing instructor in college who was adamantly opposed to using any brand names in writing, which I didn’t get… For better or worse, brand names and proper nouns can contain some of the most richly connotative luggage in any of our language.

I’m hearing more violins, more strings in general, more melodic, more dual harmonies sung between you and (Burch) and a little more twang, too! Tell us more about how these new songs came together and what you guys wound up aiming for when you went down to Nashville. Did you have a theme or a vibe that you guys wanted to…uh, forgive the music journalist cliché, “capture?”

Well, a lot of things were different this time around. This was the first album we’ve made away from Michigan. And we knew that doing it in Nashville was going to cause a prominent departure about that. It was first [album] with anybody outside of the band on producer credit (with Ken Coomer co-producing and playing drums on the whole album). It’s also the first album in which we even used a click track. So…all of this points to the fact that we wanted to make a somewhat more polished and tighter sounding album. We wanted something lush and classically orchestrated… hence, [Nichols] charting out sweeping string arrangements and bringing in professional violin and cello players…hence, [Jones] playing a different version of electric banjo that actually sounds more like a shimmery Telecaster…hence, [Burch’s] harmonies getting layered for lushness. I really wanted a classic chamber pop/baroque pop vibe. You know, shamelessly utilizing those classic pop tricks from 60s records: mellotron and tambourine and handclaps. And so going with [Coomer] was very deliberate, in that Summerteeth by Wilco is one of my favorite more modern albums that successfully harnessed that classic sound. And… [Coomer’s] drumming instincts definitely helped us along that direction as well.

Talk about the last year or so, on an existential level…as a writer…going from the process of Sitcom Afterlife into this more polished, more deliberate production and your other transitions, be it as a quartet, or to settling in Detroit.

Well, I’ve definitely fallen into a more settled attitude and contentment than the guy who wrote Sitcom Afterlife… We toured hard on that record and had amazing experiences from Rome to Istanbul and back. But 2015 also gave me a lot of time at home and I’ve really been grateful for the opportunity to feel more in place and tapped into Detroit. I love where I live and feel rather…comfortable. Which can be a scary word. I’ve actually been writing more poetry than songs lately (Milia’s first collection of poetry Intruders Laugh Wickedly, was released earlier this year). I have more songs than I know what to do with, so it’s refreshing to switch up my mode of language and writing process to find other unsettling fixtures of my psyche to obsess over nervously.

Let’s make you more nervous, then. Or, at least self-conscious…as we ask about this kinda clichéd idea about a band “finding their voice” somewhere around their 3rd or 4th record; Eternity of Dimming was so epic that it almost felt like the end of a trilogy…and that Sitcom Afterlife opened a whole new play, onto itself. So where does this fifth album fit, where does it find the band, where are you on your journey and what do you see, how do you feel?

My greatest ambition for this band is also what I’m already most proud of…continually building on an expansive catalog of albums that act as intertextual continuations of each other. Eternity of Dimming totally dictated what kind of record Sitcom Afterlife became, and so forth. It’s artistically interesting to me to react, whether against…or in embrace of…, one’s own work. Each record has its own voice, its own level of urgency, varying tone of sincerity or desperation or flippancy. But it all works together for me as one dynamic document. Its flexible and propellant nature is my greatest source of self-therapy.