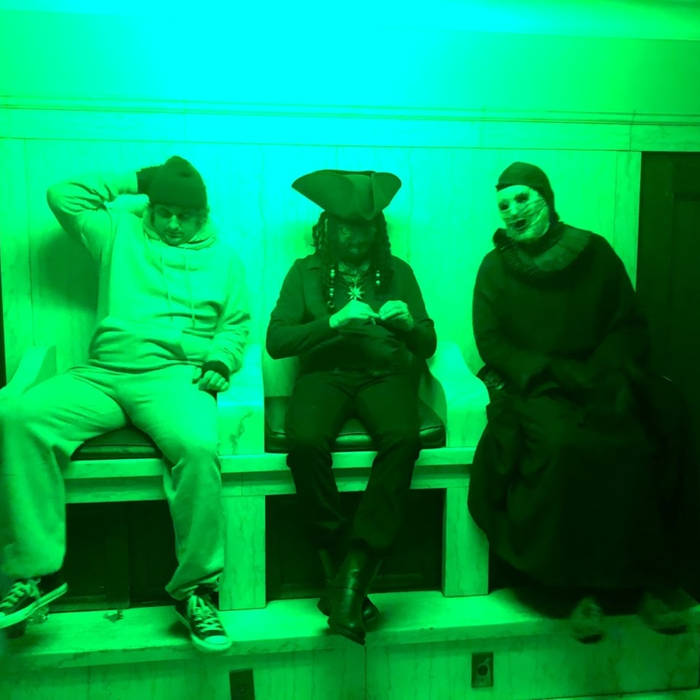 Musician Tom McCartan is the songwriter at the center of the Ypsilanti-based clergy/occult/metaphysically-ruminative indie-rock band known as Priest Potion. McCartan is joined by Matt Jones, Emmet Cousino, Greg McIntosh and Carol Catherine, and they’ve been playing sporadically around Ypsi and Ann Arbor over the last two years. Their new single, from a forthcoming debut album, combines rustling rhythms, shimmering splashes of guitars, and McCartan’s throaty vocals softened by some sweet harmonies in the secondary chorus. It’s a builder, a driver, a soaring burst of Americana-pop sunshine!

…and yes, that’s a painting of John the Baptist’s severed head… More on that later.

McCartan has been traversing the local music scene for more than a decade, and he’s crossed sonic sight lines through other bands like Flatfoot, The Great Tribulation, and has collaborated with Timothy Monger (as well as, of course, Jones and McIntosh).

This Saturday, Priest Potion celebrates the release of that aforementioned debut album. They’ll be performing at Ziggy’s in Ypsilanti with Minihorse. Click HERE for more info.

Priest Potion put out some demos in the Spring of last year, but they were sparser, more atmospheric kinds of dreamy-dirgey folk odes. “Carol” is fuller and fierier by comparison, but those original tunes are still compelling. Let’s go ahead and chat with McCartan about Priest Potion and the upcoming album….

So, Tom, Tell me about how and when these songs came about and how Priest Potion formed…

Tom McCartan: Essentially, I had a bunch of songs that I wanted to play out and record. All of the Priest Potion songs were written over the course of the last few years. Now that I say that out loud it seems like a long time, but, to me, they’re all the newest batch of songs. Usually I write a bunch of songs and can’t really move on from them until they’re recorded. It’s a hang-up of mine. The oldest “Priest Potion” song is probably about five years old while the newest, “Carol,” has only been around for a few months.

What kind of vibe or aesthetic were you feeling drawn to…?
About five years ago I read this book that I saw on a list of David Bowie’s 100 favorite books called “The Origins of Consciousness in the Breakdown of the Bicameral Mind.” It completely blew me away. I won’t go into too much detail about it here because it’s pretty heady, but I’ll just say this: it’s the outline of a theory about how we, as humans, became conscious creatures. It’s been roundly debunked by now, but the ideas in the book are incredibly intriguing. Also, the author uses classic literature as a way to punctuate the evolution of consciousness–which is something I’ve always been drawn to.

I remember discovering that list after Bowie passed. There were so many brilliant and obscure items on it!
Yes! Anyway, most of the songs on the record are in some way referencing those ideas. Most of the time the narrator is lamenting the birth of consciousness–because something that’s always really intrigued me was the idea that at some point someone or some group of people had to be the first to experience “consciousness” and that must have been absolutely terrifying.

If a song on the record isn’t specifically about the birth of consciousness then it’s about some other pseudo-esoteric concept that I read about somewhere. I love that stuff—secret societies, hidden chambers, secret knowledge, etc… The aesthetic for the sound was much simpler. It’s a combination of what it sounds like when Greg, Carol, Emmet, Matt, and I play together. It wasn’t forced at all, we just went for it.

Tell me about your bandmates and how your first few shows went? And about that time you kept your priest costumes on and went into a bar or a restaurant after a show…
TM: As far as bandmates, I’m the luckiest person I know. Musically, their combined and individual resumés speak for themselves. I can go into all that, but I think people already know them. Personally, they are among my closest friends and just great people to be around.

And it’s funny, because our “first few shows” have really been our only shows. We’ve only played out maybe…five times? This is by design. I wanted to make sure that the people in the band enjoyed being in the band. At no point did I ever want anyone to play a show that they weren’t completely excited about. We’ve all played a billion shows, so what’s the point? I pitched it like this: “hey, we’ll play a few shows, but only if they’re good shows, and we will record a record.”

So how about that very first show…?
TM: Our first show was Mittenfest last year–we opened one of the nights, I think it was the second night. It seemed like people liked it. It’s hard to tell. It always has been hard for me to gauge people’s reactions. I do know that we all have a lot of support from our friends. My coworkers showed up in full force and they have continued to do so–can’t thank them enough.

Maybe two weeks before that first show we were  spitballing at practice and we got to talking about how ridiculous it would be if we actually wore priest robes and vestments. And, yeah, we ended up doing it and, again, I have no idea how that went over. What’s funny is that, at first, we were a little hesitant because, you know, we’re not trying to make some sort of statement or be super provocative, but now as things progress it’s as if the Catholic Church is actually giving the band Priest Potion a bad name and not the other way around. You asked about the time that we kept them on after a show–well, I wasn’t actually there, but the way I heard it was two of the other people in the band went to Abe’s in Ypsi after Mittenfest while they were still wearing their gear and people legitimately thought they were clergy–which led to some impromptu, late night, confessionals….

How about the second show?
That was at the Lager House in Detroit with Doop and the Inside Outlaws and the High Strung and it was epic! The band makes fun of me still for how much I gush over how great that show was. It was packed start to finish–Ypsi traveled so well that night, it was wonderful to see–all the bands killed it, and everyone was incredibly nice and gracious…After that, we went down to Virgina to play a couple shows. Long story.

Tell me about this song and the iconography of John the Baptist’s severed head…by Caravaggio. Unpack those lyrics for me
TM: Ok…, The narrator of “Carol” is, in fact, the severed head of John the Baptist. I’ll skip the backstory as to why his head got cut off because it’s not really important for the song as the action takes place after the event. Basically the severed head of John the Baptist is pleading with Carol–(the same Carol Catherine) who sings and plays synth in Priest Potion–to help him figure out what the hell is happening. The first couple of verses are just that, essentially: “Carol, what’s happening here? Help me. I am confused.”

Then the song gets kind of weird. This might require a little explanation.

So the last two verses of the song are about how poor John’s severed head has been found by some weird dudes who are trying to get him to tell him secret knowledge. He panics, gives out some mystical info, and they run off and start building cathedrals or something like it.

I remember you telling me, before listening to this, that there’s a lot going on, even in just the four minutes of the song.
The music, the guitars, the drums, the backing vocals – that’s all very high energy and full-sounding here- can you talk about the recording expreience overall and how it went for this album?
TM: The goal was to do everything ourselves. Greg was the real mastermind behind the technical aspects of the recording–he did an amazing job.

This is how it went down:  We recorded all the drums into a cassette four-track in my basement by mic-ing them and running scratch guitar/bass directly into the recorder. This way we were able to isolate the drums. Then I’d dump everything from the four-track onto my computer and record my guitar parts over it, also in my basement. Next, I put all the wav files onto a thumb drive (we should have used Google drive, but we didn’t) and I took it over to Greg’s. He then put everything onto his computer and was able to record his guitar, Emmet’s bass, the synth, and vocals at his house. Then Greg mixed everything.

We did everything pretty quickly. I’m a huge proponent of the “this is what these songs sound like right now” theory of recording as opposed to the “let’s spend two years making these perfect” ethos.