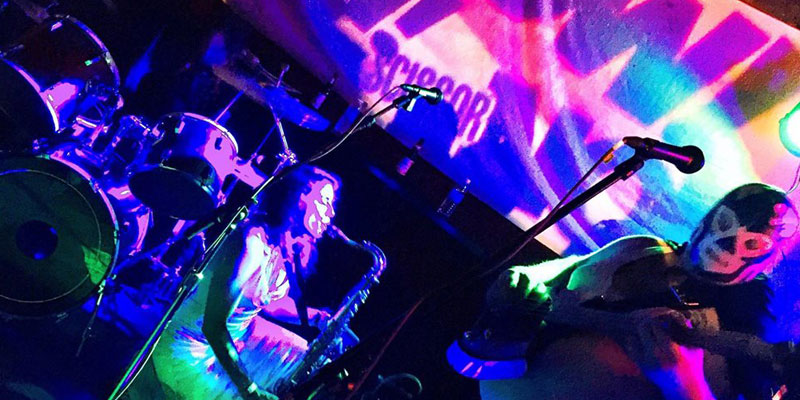 It’s already April? Is it cool if I cooked up a ‘favorite-albums-of-the-year-so-far list?  Ya know, to mark the first third of the year? Maybe I’ll do that in the next column. I’ve got some candidates, assuredly.

If you’re into modern punk and post-emo sounds, try out Terrible As The Dawn, a new Ypsi-based duo that literally just popped up on Facebook. Meanwhile, there’s also the softer, sweetly-twanged folk sweeps of singer/songwriter Ann Arbor-based Mike Vial, who put up a new single and a pair of demos for streamers.

This weekend…I have events to point you toward, each of which occurs on Saturday.

I nearly started the intro to this first show blurb with the phrase: “Several of my favorite local bands are on one bill…!” But I wouldn’t want to seem biased. Scissor Now succinctly describe themselves as jazz-punk, and I think, amid the four other bands performing at the Dreamland this Saturday, we should check out one of their songs, first… A bit of X, a bit of James Chance, a bit of Deerhoof, a bit of everything…

They’re joined by Human Skull, Congress, and Slim To None, with DJ RGB. And if you think I’m biased, then what if I told you this was a free show?

Meanwhile, over in Ann Arbor… it’s Hash Bash time! The 15th Annual Monroe St. Fair and Hash Bash Festival gets started at 10 AM on Saturday. There will be vendors featured and live musical performances (starting after 12 noon). I’d advised just showing up (to the 800 Block of Monroe St) and free your mind…your ass will follow. Did we mention there’s a countdown to 4:20 featuring the one and only Tommy Chong? Check it out.

Detroit duo Golf Clap will be performing a Hash Bash Late Night after party at the Blind Pig with Roman G. Martinez, and Isaac Castor. At 9:30 PM, Detroit jazz-poet maven and counter-culture mega-icon John Sinclair will be starting off the night with members of the Macpodz.

Maybe you wanna head to Detroit, instead? Perfect.

I have a soft-spot for post-punk. I always will. Take a listen to the taunty-tough cartwheel coolness of D.C. based Gauche

That band stops into the UFO Factory in Detroit to play a show with Ann Arbor/Ypsi trio Rebel Kind and Detroit-based trio Casual Sweetheart. Deadbeat Beat will be DJ-ing, sufficiently augmenting an evening of folk-punk, rough-pop and surplus charisma.