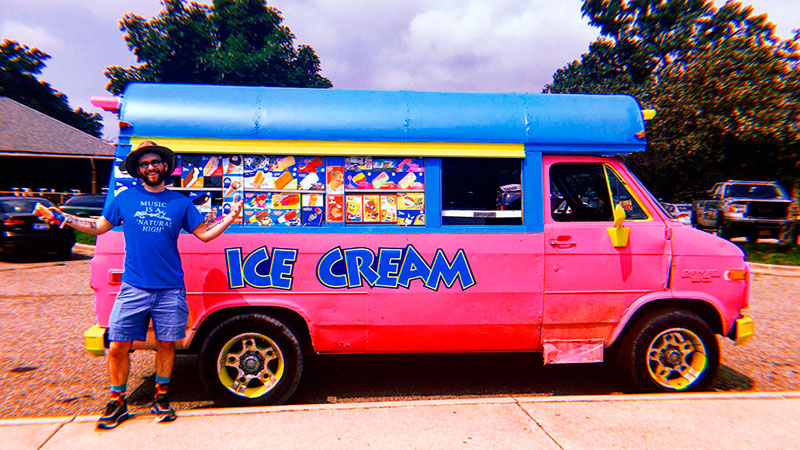 Evan Haywood admits he’s a maximalist by nature. He’s aware of the surplus texture and surplus emotion that he’s consistently inclined to layer throughout his arrangements. Categorically, you’d call him a folk singer, but having absorbed innumerable albums through both deep listening and through aural osmosis via his former day-job at Ann Arbor’s Encore Records, Haywood tends to draw upon myriad musical influences, particularly infusing his enchantment for the genres of hip-hop, reggae, and ambient music, into his acoustic-guitar/singer-songwriter mold.

He’s a maximalist, particularly, when it comes to the empathy and convictions he imbues his songs with—such as “Do Right By My Kin.”

“I kinda burned-out on pain,” said Haywood. “Psychologically, I would say I’m a very empathetic person; observing so much suffering over the past several years has really put me in a state of numbness. The only way I could try to combat that numbness is by pursuing things that I feel hold a certain beauty, or can contribute something to a conversation.” Haywood said that he long ago came to appreciate that being an artist, whether musical or any medium, meant that you should reflect upon the times in which you are living. Rather than don rose-colored glasses and gloss over disconcerting sociopolitical developments over the last 5-10 years that have augmented suffering around the world, said Haywood, he opted for (brutal) honesty.

“That’s the only way I’ve ever known to write. I have to express myself in an honest and direct way; that’s how I can cleanse myself of these experiences and move forward.” The song you’re streaming above comes from the 2018 album, Perfumed Gardens, and it’s certainly a distillation of defiance, with heightened visceral imagery to augment lyrics that are absolutely not mincing words, here… “It came from watching a lot of people hijack the narrative,” said Haywood. “I’ve witnessed a certain strain of revisionism which has been put forward insinuating that this country would be better if we took ourselves back to about 1850. People who have nefarious intentions and want to cause harm to millions, and harm the planet, tend to get the largest soapbox, or get the most media coverage, and thus the greatest ability to propel their message…so how do we send our message back? A message that’s a voice for the people?”

Haywood is an Ann Arbor-based singer/songwriter and producer who’s been on the scene for more than a decade now. In 2016, he put out his transcendent ambient-folk album Ramshackles, but before that, he’d already established himself as a founding member of the hip-hop collective known as Tree City. Perfumed Gardens was the grittier and raw side of Haywood, while still being dazzlingly coated with dreamy reverb and stormy distortion (never drowning out the melody and the message, mind you).

And when he talks about sending a message, that’s coming from his knowledge base in communication technology —he’s finishing up his Masters in Information Science soon at the UM School of Information. But the creation process for Perfumed Gardens started a few years ago, when he was “floating” between Hamtramck and Ann Arbor, both in a figurative and literal sense. Haywood hadn’t made the move back to grad school yet, and was instead developing his recording studio inside the Russell Industrial Center (east of Midtown Detroit). He was residing in a space with friends of his who were jazz musicians, and just loosening up his mind and emotions through some exhilarating jam sessions. While Ramshackles was an almost entirely solo-production, the songs of Perfumed Gardens were worked out with a band of collaborators. Haywood said that the presence of the band, and the amount of time they’d spent playing the songs together before completing the recording definitely added to the edgy energy that’s captured on tape. And it was Dave Feeny at Tempermill who helped mix these onto tape, but the songs were initially recorded at the now bygone Backseat Studios in Ann Arbor, with Fred Thomas.

“I feel like Ramshackles was more of an expression of my depression, and Perfumed Gardens is an expression of my anxiety. I’ve been dealing with all these external things and also my own internal state, having faced some serious health issues and dealing with my own mortality. And it was fueled by this notion that… if this were to be the last thing I ever made, I wanted it to be like this… I’ve been through traumatic things in my life and lost a lot of people close to me to suicide or gun violence or car accidents, or cancer… So I have a very clear understanding of how life is very fragile, and very short.”

In that respect, Haywood has not only been readying the newest batch of songs for his next album, while also nearing completion on a new Tree City album, he’s also gotten into the editing process of a documentary film he’s hoping to complete and release, inspired by the legacy of reggae music. Recently, Haywood was able to spend a long span of time traveling all over the island of Jamaica, and remarked upon how particularly inspiring it was to spend a good portion of that time hanging out with legendary producer Lee “Scratch” Perry. “When it comes to my sound, and how I perceive of a mix…., the person who taught me the most was (Perry).”

Haywood said he was moved by the history of Jamaica and how its independence is intertwined with reggae music. After gathering 50 hours of footage of intimate interviews, he came to appreciate how reggae music was utilized as a tool of anti-colonial resistance. It demonstrated, Haywood said, “that you can use art as a weapon against physical weapons, and against oppression, and you can free peoples’ minds without ever firing a single shot.”

Meanwhile, it’s been almost nine years since Tree City’s most recent release, but Haywood said they’re nearing completion of a magnum opus. This hip-hop group is comprised of Haywood, Kyle Hunter, and Jacoby Simmons. They’re assembling lyrics to a stellar composite of beats provided by world-renowned electronic artist (and Ann Arbor’s own) Dykehouse. And Haywood said that they’ve been approaching it with the same gravity with which he approached Perfumed Gardens…, “that if this were to be the last Tree City album, it should be the one that people remember us by…”

Haywood said that applying a maximal importance, a maximal value on the message you can send, in any piece of music or whatever you’re working on…, is what’s kept him motivated in these strange times. “We’re all on this planet for just a little while and the job is to enjoy ourselves but also make life better for other people, and help each other stay inspired. (Music) should be something that will help to satisfy and heal our own spirit, and that’s what can get through to other people. If you intend to make it for other people, then it’s transparent that it’s just a product…it should be made personal, and if you’ve put your soul into it, that’s what will matter to other people.”