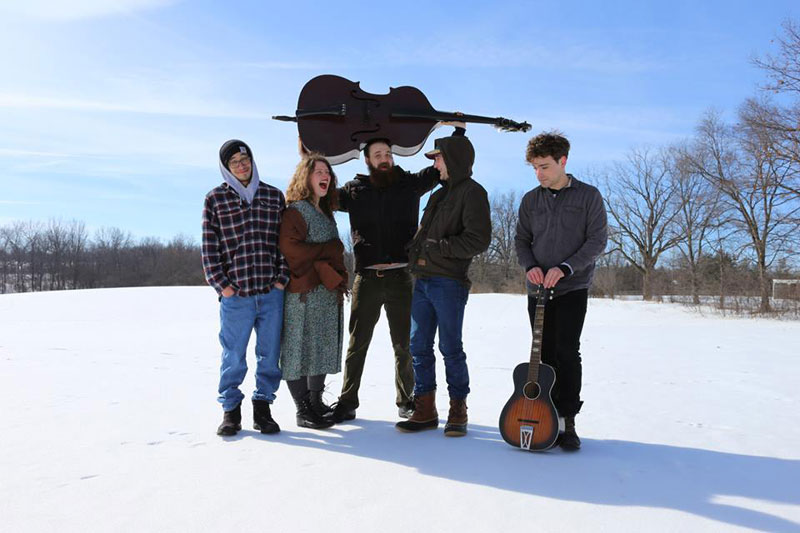 “Whimsical melodies blushing with multiple harmonies, heaved by 2-3 or more vocalists at once to evoke the sense that you’re in the room with them. The lead vocal is often traded between members, similarly, the instrumentation is mixed up from song to song. Banjos, harps, acoustic guitars and stand-up bass and… what sounds like a mandolin! Daniel Ackerman, who plays guitar, keys, drums and sings, calls Wych Elm’s beguiling brew “…porch-country…”

The band formed in summer 2012 and would often play out on the shaded porch of Vali House (a Kerrytown Co-Op) for its optimal cool temperature and open air breezes. The community oriented atmosphere of the Co-Ops heavily influenced their approach to music. The band features Rachel McIntosh on lead vocals/guitar, while Ackerman, Max Hernandez and Colin Mercer each playing banjo, guitar and mandolin while also singing. Charlotte Crosmer is on fiddle while Charlie Reischl plays bass. They may also employ harmonicas, washboards, kazoos and, yes, cow bells, into their strummy/singsongy balladry.

“Sometimes we spend hours practicing harmonies, sometimes we just shout,” said Ackerman. “But that sense of group participation, even when it becomes reckless and chaotic, is at the core of the band.””