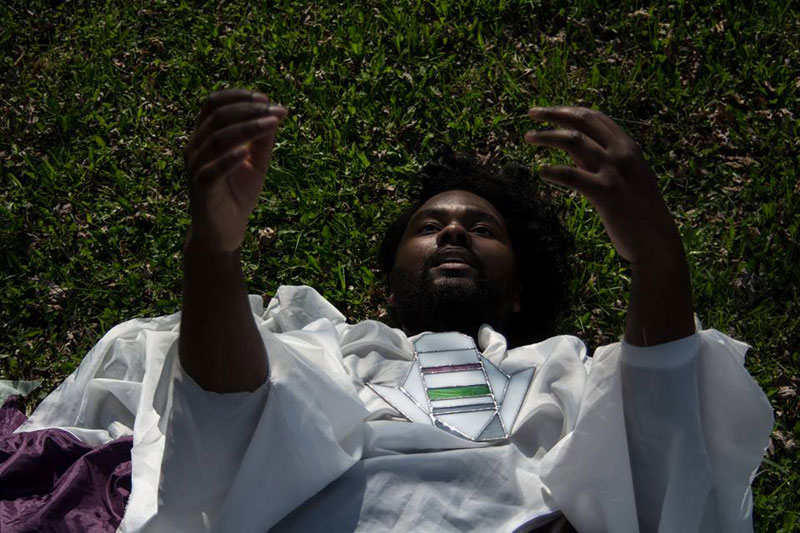 Flint-based force of nature Tunde Olaniran’s latest full length album is climax of sorts—there have been a handful of EPs and several mind-blowing live performances and music videos leading up to its release. And you’re damn glad for having heard those, too, because not only were they sensational demonstrations of the preternatural and iconoclastic talents of this R&B-ballad-belting, raw/regal-techno rap stylist, but there’d be no other way one could properly prepare for Transgressor. 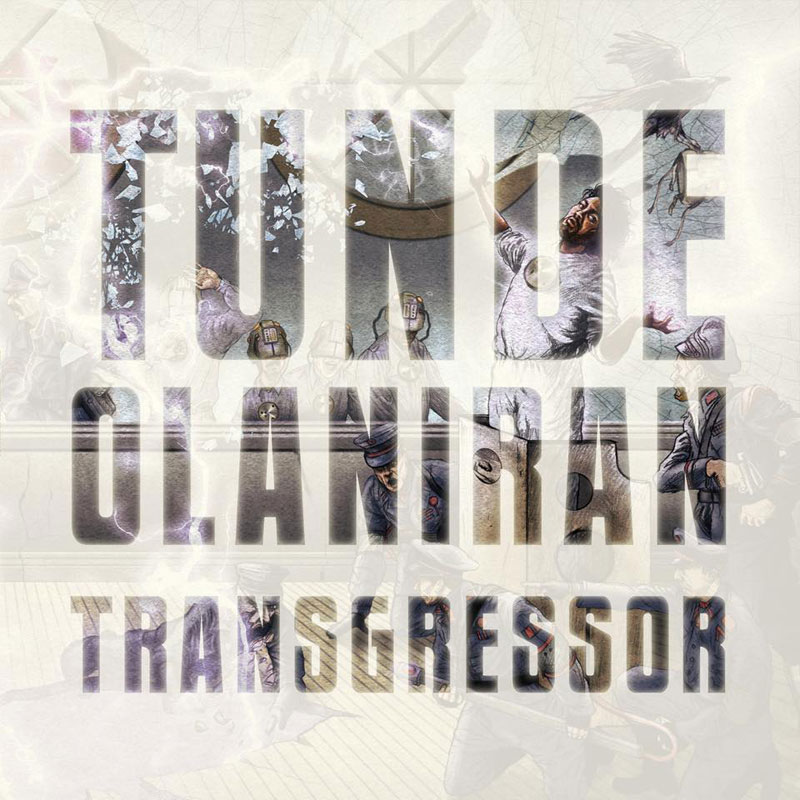 I know I’m inviting satirizing derision for sounding so hyperbolic, but I don’t care. I’ve heard the whole thing and I’m guessing you haven’t yet. Maybe you’re too cynical for Transgressor. You can check out before the next paragraph, then…

Every 45 seconds or so I stop writing this review and start dancing. It’s hard for me not to from a stand-up desk… your feet just start shuffling away from the work of the writing. My foot tapping distracts me from how to grammatically structure the rest of the sentence that I’m currently writing… the ellipses indicate where and when I started dancing….

Tunde Olaniran comes to the mic with an incomparable presence and a graceful defiance. There’s fineness and ferocity to his voice; the low guttural raps, the mid-range croons, the pained and impassioned falsettos. The tones, textures and percussive arrangements are a dizzying montage: primal garage disco, 22nd century dance/rap, silky smooth/punk-gritted R&B and elemental electronica. Its primal energy is rallying…does one dance to “Namesake” or does one pump one’s fist? Maybe at those quieter bridges you could even stop, take a breath and think it over as a smoothly and swiftly synched chorus like this waves its way over you:

On “Namesake,” Olaniran sings about being the puzzle piece that never fit, growing up as a teenager overseas in the UK. He spent much of his youth abroad, between Nigeria, Germany and England, before finally settling in Flint. On this song, possibly the most vibrant of the potent bunch, Olaniran’s reaching back to younger, unsure, awkward days, when a very quiet ambition crackled diffidently inside of him, it’s a pressure-release song, shutting off the frustration over ever “sounding fictitious.”

“Namesake,” paired with equally compelling implorations to break boundaries to self-expression like “Transgressor,” “Let Me Go,” and “KYBM,” details Olaniran’s own epic leveling-up, a lifelong slow-burning strength-building, with confidence bolstering experience as he came into adulthood, finally “reaching up for those high notes.” His music, like much of Transgressor, just as with his dynamic live performances, are the fruition of his aim to pass on that same encouragement to an audience. You can still dance, if you like. But listen closely, “…you…” yes, you… “…can be yourself.”

We haven’t thoroughly touched on the lyrics yet and that is where the activist and educator sides of Olanrian can shine, using an erudite vocabulary and a keen poet’s sense for prose to treat topics as weighty and relevant as systematized oppression, social anxiety, and identity empowerment. On “Trangressor” an adrenaline-pumping blend of orchestral strings, metallic drums and racing synthesizers, he sings about the serious stakes of climbing walls both real and perceived and not fearing “the warrior” or the transgressor as a title one risks adopting by their actions.

We should also mention that he can be varyingly topical, satirical or even geek-culturally playful with his lyrics, stitching in lines about Paladins, hydras, and Nancy Drew.

So wavy, where’s my trident? / keep it wetter than a hundred hydra heads

“Where he come from? Left field” These lyrics, from “Up & Down,” swagger and smoothly shoulder-check their way into the listener, set to this shimmying beat and a cartoonishly honky bass blurting a slinky hook. It’s another example of the variance in mood and imagery fluctuating throughout Transgressor.

If you took the instrumental arrangements that Olaniran worked out with producer Jon Zott for a song like “Everyone’s Missing” then you’d have a sensational dance track by itself, with percussive bass plucks over these haunting chimes as a stir of sequenced beats and cymbals shear underneath. But this song, like the majority of Transgressor’s entries, finds Olaniran slamming some exceptionally difficult questions onto the social feed, melodically wailed from a weary heart and a wearier mind out into the echoing ether of a concrete wilderness of confusion and mixed media messages.

I’m tired of vigils / been blowing the whistles / straight homicide / then he gets acquittal (“Everyone’s Missing”) Later, on the anxious and energizing techno-hip-hop hybrid “Run To The Gun,” he’s nearly combustible when he hits: “…We don’t know where to go / run with no map to show / the dark fed into the fiction / the mercy was a sharp blade / but from here we see a new fight / old roads repaved / it’s more than just a rendition / new rules new waves / wasn’t always on my eyesight / came at it sorta sideways but now  I see it so plain…”

When Olaniran isn’t writing lyrics, singing or producing he’s designing the costumes and programming the choreography for his live show and backup dancers. Beyond that, he also works as an educator, specializing in gender, sexual equality, sexual health and awareness. The tireless community activist also works as the statewide Manager of Outreach for Planned Parenthood in Michigan. Beyond music, though, his lyrics are also influenced by progressive, socially-conscious sci-fi pioneers like Ursula Le Guin and Octavia Butler. Lately, you can also add “author” to Olaniran’s resume with the recent collaborative anthology Octavia’s Brood.

With Transgressor, Tunde Olaniran is telling the first-person narrative of a true original that’s already seen the world but still has questions; it’s an atypical performer and stylist treating prototypical stereotypes like an exterminator, a lover of pop music who understands the vitality of punk’s reckless abandon, a rapper who can channel unavoidable flares of aggression into something exceedingly more cerebral… “Keep the truth spilling” he sings in KYBM, “…keep your body moving.”

It becomes about so much more than just dancing…