Weekly What’s Up: An Interview With Santiparro Alan Scheurman (pt. 1) 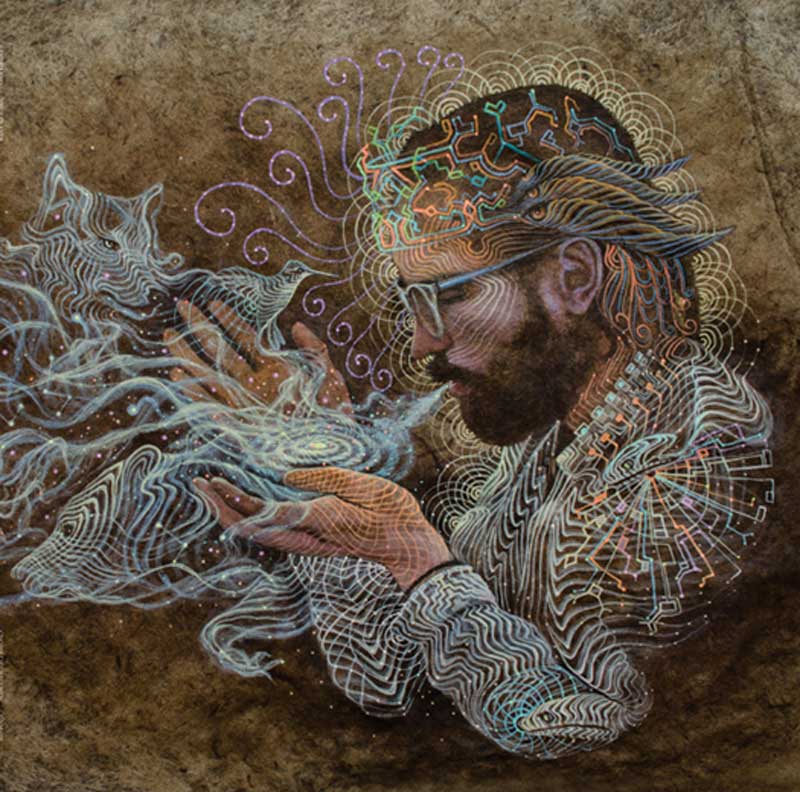 Take a deep breath before listening.

Go ahead, take this second introductory sentence to let the cruder vibrations of the bustling world about you diminish.

Singer/songwriter Alan Scheurman spent the early 2000s igniting and exploring his voice and vision as a musician amid the S.E. Michigan scene, primarily through the beloved indie-rock outfit Rescue. Through 2008-2009, as a solo artist, he released an understated yet sensational solo album, Old Patterns.

After growing up in Detroit, and following a spiritual awakening in 2007, Scheurman moved to Brooklyn. He was given the name Santiparro (the lens that sees many things not usually seen) by a Wixatari (Huichol) family during a pilgrimage through Wirikuta, the sacred desert in Mexico where peyote originates.

The lyrics are varyingly poignant and profound, engaging and encouraging. The songs are a series of sublime sonic ceremonies, exhibiting openly spiritual, positive folk-based music, adorned with Scheurman’s high, wispy voice wafting with a fragile sounding trill curled between the breathy lyrics. Apparitional as his vocals may sound, at first, his incantation has an uncanny firmness to it; like the first faint orange of a sunrise, it promises brightness.

Heavily shaded acoustic guitars sound off a mystical vibe over minimal percussion (snare drums and shekeres) and calming chimes. Essentially, True Prayer is a contender for modern neo-psychedelic-tinged folk music, right up there with Oldham’s most recent comparable tract.

Current caught up with Scheurman from his current home in the Catskills as he prepares for a tour (stopping in Michigan around Valentine’s Day).

Tell us about all of the changes you’ve gone through these last five years, personally, creatively, spiritually.

I began identifying myself as a spiritual person and really started investigating things outside of material existence (by the time I released Old Patterns). I helped found Golden Drum (after moving to Brooklyn) under the guidance of my spiritual teacher Maestro Manuel Rufino, a public community center hosting regular events and lectures that’s built around a core group of 20 people who live in four loft spaces together, centering around spiritual practices and universal studies. The core of the teachings are rooted in Native American philosophies.

The evolution of my songwriting came through the study and discipline I went through and I began focusing on sound healing. I learned to write lyrics from a perspective of that infinite potential that is realized from having gone through real deep healing, rather than where a lot of other artists use their art as a tool for catharsis, still in need of healing. I consciously chose to project art that gives the listener a more cosmic perspective, transcendent of struggle.

Would you consider those studies to be your most formative experience, then, or was it something like the pilgrimage to Wirikuta?

For the last five years I lived amongst a group of people who dedicated themselves to self-mastery through the process of initiation, which isn’t something that comes in just five years. I had the opportunity to listen and absorb the teachings of many very wise elders. I was blessed to travel on many pilgrimages to sacred sites and participate in hundreds of very transformational rituals. True Prayer is a testament to really learning how to pray, what prayer really is, seeing it work.

There’s a lot of ambient sound effects and what sounds like a heavy dab of echo and delay effects, evoking a dreamlike feel to this record. Can you reflect a little on that feel?

Some of the tracks actually were recorded outside. So, those bird sounds you’ll hear are just captured on the actual recording. I was tracking in an old farm house in upstate New York with cracked windows to let in a little fresh summer air. I chose to embrace these elements because most of the time when I’m playing these songs I’m in ceremony or in natural environments. Even if I play in the city, I internally create a space where I am surrounded by the spirit of the forest, the mountains, the sea. With sound healing, the work is centered around the creation of drone sounds that help induce a meditative or chromesthesiac (sound evoking an experience of color) state. This helps bring the listener to a place where things might sound affected by delay or reverb even if they are not. You might hear synthesizers that aren’t even there.

There are some substantial, life-changing concepts and experiences you’re describing and regaling here, lyrically.

It took life-changing scenarios to put me in a place to write about my own spirituality and relationship to The All. I hope it can serve as a sort of lighthouse to lead others to explore some of these concepts, like the cycle of samsara and freeing ourselves from it (“The Benefit Of Confrontation”). With guidance from any of the roadmaps of the spirit world and through discipline and determination for self mastery, one can attain liberation from suffering. But I’m telling the listener: ‘Hey, I’m a seeker too, and I found something. So I’m passing you the key to the door. It’s up to you if you want to go through it…the first step, fellow traveler, is self-reflection.”