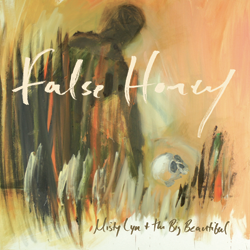 For her voice, her words, those resonant acoustics and tingly tones she cooingly crinkles towards altogether affect this gorgeous/overcast, this bleak/beatific ambiance all it’s own, embodying, in song: the season’s grayed-rainbow clusters. With The Big Beautiful, Bergeron premiers her 2nd LP, False Honey’s (November 3rd at the Blind Pig – online now via iTunes and Bandcamp). But there’s much more to Misty and her richly augmenting rock-tingeing quartet (Ryan Gimpert/Matt Jones/Jim Roll/Carol Gray), more than just harmonious hints of pastoral leaf-rustlin’; her lyrical fare is as stormy (yet picturesque) as this cooling season’s inherently shifting state; songs of stark transition. There are moments of rousing warmth, with up-tempo string-sawed, strum-n-chimed ditties spliced by midnight rovers, detoxing lingering uncertainty through sweeps of haunting pedal-steel and uneasy guitar cascades. Our mirror-gazing narrator fearlessly lays out some personal pains and finds resolution; change is coming and its chill can be biting but most of these sublime songs seem to indicate that for Misty, a personal springtime could come early…

On some songs, the light will do this mellifluous songbird no good, her timing’s delayed and she’s only got this one note that’s getting harder to hold…But the music goes on, she resolves that she’s gonna sing this one note, sing it out (and be backed by some dazzling mandolin jangles and fiery guitars, barn-burner drum bustles and steady bass beats like a heavy, yet unflinching heart.) All she’s got is this one note; all she’s got, in the face of whatever kinds of rainy days, is this music. “I sing out my one note…till you hear what I have to say…”

Ypsi-psyche-folk quartet Ferdy Mayne let loose a pair of singles online last month and it’s a welcomed listen, three-years-to-the-month since their proper debut (Chase That Jackrabbit). “Quaint Mosaic of Fate” is a guitar-charged rocker that sounds, refreshingly, as far as six (not just three) years ahead of where singer/songwriter Shane Firek started, maturing from a colorful and angular Americana-skewing into this, invigorating anthemic rock-whipped, complex rhythms, tighter hooks, bracing fogs of fuzz and above it all, Firek’s soaring rasp – find it
on bandcamp.

Matthew Dear’s not local …but Michigan can still legitimately claim a little piece of this shadowy-synthed-up murk-maven of indie-techno/funk-flecked musings. Because in some views, his career as a world-renowned electro-composer/ performer/ DJ/ producer started here in Ann Arbor; the Texas-native’s younger years spent studying at U-M proved formidable, not just for him but for another appreciator of Detroit’s seminal techno progenitors, Sam Valenti – who went on to found Ghostly International, (thus fostering Dear’s early works, including a 12” single entitled “Put Your Hands Up For Detroit.”) So there’s all that. Now Dear’s returning to his old alma mater to stir up a bit of dizzy/dreamy/dance fits at the Blind Pig (November 7), touring in support of his fifth album Beams. Beams, having being recorded in a barn in upstate New York, perhaps brought Dear towards brighter tones and the outdoorsy aesthetic affecting more bliss than brood. But these are still light-dimming, cruise-control-grooving nocturnes; loops, blips and graceful glitches adorn this steady shimmy-set. But the snappier funk riffs and fluid bass gives more heart to the synthetic aesthetic still pumping at a steady techno-pop-friendly BPM.