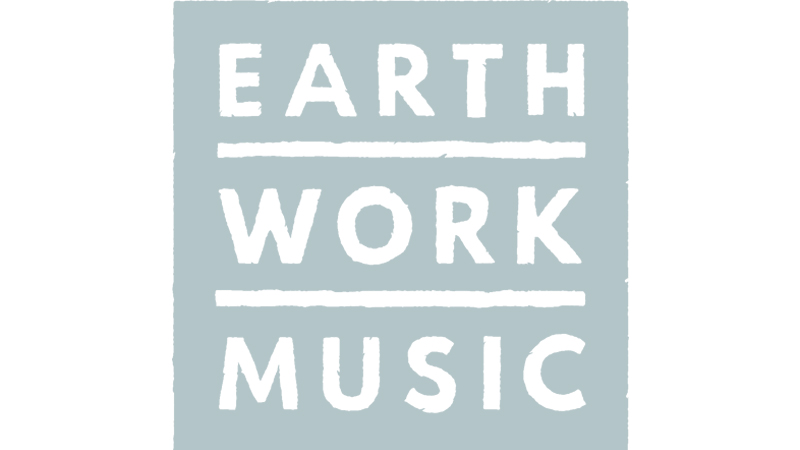 If you’ve heard of Earthwork Music then you’re familiar with Seth Bernard. The singer/songwriter was one of the primary sparkplugs for what became the Earthwork Music Collective and a key coordinator for the earliest incarnations of the Earthwork Harvest Gathering. The interchangeability also stems from the fact that Bernard was born and raised on Earthwork Farm, up in northwest Michigan.

But the Earthwork Collective is about to come out of a two-year chrysalis, says Bernard. On May 22nd, Earthwork Music will relaunch, unveiling the fruits of a two-year overhaul: a new website, new logo and branding, new mission, vision, values, and organizational structure, and new artists! Between May 22nd and June 5th, Earthwork artists will be sharing new songs and videos, streaming live concerts and workshops on social media, and lifting up community calls to action with partners.

“Some of the things we’re most excited about are building shared-power and shared-leadership, and moving into the trueness of what a Collective really is…” During the handful of interviews we’ve had over this past decade, Bernard has consistently shifted the conversations towards the equal contributions of collaborating artists, activists, and organizers who were under the Earthwork umbrella, some intensively, and some loosely, either way, his M.O. has always been to figure out how this Collective can “lift up the voices of frontline leaders and be involved in civic engagement, along with supporting social justice and environmental work and youth-oriented outreach.”

In 2018, Bernard wrapped up a four-part series of albums, varyingly titled Eggtones; right after that, he said that everyone involved in Earthwork at that time “…decided it was a good time to start an extensive process of looking inward and getting more clarity on who we are and what we already do and what people would be most excited about doing in the future.”

To a degree, Earthwork started out as what most would consider a ‘record label.’ This was 2001, and Bernard was getting ready to release his debut album. “When we started, I made the conscious choice to call it Earthwork Music rather than Earthwork Records.” And from its onset, Bernard saw the Collective as something that sprang from the supportive soils of the Farm. In a somewhat abstract sense, the Collective has often operated like a small, family farm, with a focus on cultivation, sustainability, and community, rather than commercialization.

“Music has always served a larger purpose in society, rather than it’s commercial aspects,” said Bernard. “It’s cultural work, firstly! It plays an important role in creating culture, it allows for us to participate in culture, and it has a role in movements and youth empowerment. For all these reasons, music is such a binding agent for people who created Earthwork in its early days. That’s remained the common thread.” For years prior to this, Earthwork partnered with several other similarly community-focused organizations (and some globally-focused organizations) dedicating volunteer efforts towards initiatives that empower and enrich community members, as well as environmental/humanitarian causes. And that “common thread,” says Bernard, will remain in the years ahead.

Earthwork has always operated with a central driving question: “How can musicians and artists help!!??” And along with that, over these last two years, and particularly over a recent span of months where they had a series of day-long almost-seminar-type meetings, orchestrated by Sarah Drumm, a Facilitator and Collaborative Coordinator based in Kalamazoo. These meetings were devoted to discussing and strategizing their future. Earthwork has made connections to numerous musicians and artists who are committed to a range of unique causes that are similarly humanitarian or environmentally-spirited. So, said Bernard, this season found Earthwork reorganizing and, in some senses, streamlining, to where previous contributors would be stepping away to focus on other efforts, and new artists and volunteers would be attaining a more active seat at the proverbial table.

Obviously, as mentioned, this reorganizing for the Earthwork Collective got in motion long before a pandemic put much of the world into the safety measures of a lockdown. “It’s always been the case for us that we don’t know what’s coming, but nowadays it can be extremely challenging to live inside of that sort of groundlessness. So it feels like a good time for (Earthwork) to define who we are, and to share all of our music. People are appreciating music as much, if not more so, than ever, lately. So, being able to lift up the work of a community of artists who, themselves, are trying to lift up the most vulnerable in their own respective communities, feels meaningful to us–it feels meaningful for us and to the organizations we’ve aligned ourselves with.”

Some of the newest members to the Collective are the Flint-based hip-hop emcee & spoken-word artist Amber Hasan, Detroit-based folk singer and educator Audra Kubat, and Kalamazoo-based singer/cellist Jordan Hamilton. New members like Toledo’s Sarah Cohen are based outside of Michigan, in fact, Earthwork’s base extends far beyond the mitten state when you consider one founding member, Daniel Kahn, who is currently in Berlin, Germany.

“I feel so grateful to be surrounded by these folks who have such a dedication to making great art but also doing great work. And our Earthwork Harvest Gathering has been such a natural portal through which we’ve been able to make these kinds of connections.”

Earthwork Harvest Gathering is a three-day music, arts & culture festival hosted on the farm, typically scheduled for September, near the equinox. In the immediate future, discussions are taking place that consider the safest, and if necessary–virtual, means in which live music performances can still be shared and enjoyed by all.

Going back to some of Earthworks’ focus in the near future, they were invited to host a meeting with U.S. Senator Gary Peters by members of his office to discuss what it’s like to be a musician during a pandemic and to leverage for federal policies that are supportive of artists in this time. “Being able to have these conversations with elected leaders is really important, and as a Collective, we’re stepping further in.”

Meanwhile, Earthwork still has an operative component that resembles what you would interpret as a music label. And that means any of the artists featured on their roster could be an entry point for you to learn more about what they do, and even potentially become involved. But, if you’d like to sample some of the sounds of some of Earthworks artists, just click HERE: