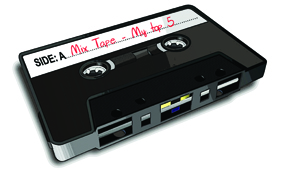 1. Chit Chat – “Cruisin” – This Ypsi trio are exactly what I want a band to sound like if I hear the prefaced descriptor: pop/punk – they’re like spinning tops’ ricocheting from guttural noise, to hazy indie-rock grooves, to elbow-scraped jostles, to daydream-sunshine struts, all of it glistened with that surfy reverb guitar shimmying over a buzzy low end pipeline. One song is chaos, the other is jangly, and “Cruisin’” is a lovely driving sunset ballad that soars for its first two acts and then revs up into a sweet squall of riffs.

2. Matt Jones & the Reconstruction – “Special Forces” – Josh Malerman (of the High Strung) sat beside me as Jones performed this song (aided by Chris Bathgate on mandolin) inside Jim Roll’s studio. As the hushed acoustic guitar jittered and jigged towards the rushing, cello-sawed poignancy of the chorus, I nudged Malerman and whispered with dorky enthusiasm that this’ll be the song to make Jones famous. Compared to his usual fare — elegant/eerie, sweet/supernatural chamber-pop — this is practically a pop song.

3. Secret Twins – “Hands Up (Arms Down) – Drummer Tim Thomas still calls Ann Arbor home, even if his “twin,” singer/guitarist Dina Bankole, recently settled east in Hamtramck. They released this song at the end of November: not-even-2-minutes worth of a jangled, jogging, stomp and slide ditty – Bankole’s crooning-cooing-belt harmoniously sweetening what’s just two shades sunnier from being a punk-rock punch-out.

5. Bad Indians – “The Other Side” – Okay, back to punk…well, punk-esque? Psychedelic-rock? I’m cheating here, since this song is part of an EP that won’t be out for a month (even if you can stream this single, now, on the band’s bandcamp-site). This band’s always open to experimentation (and copious reverb), but sometimes they can settle in for 3-minute shambled-up jams where the quavering organs dazzle your ears, the snaky guitars put the hook in you and the drums keep kicking you forward.

Photographer Kenny Corbin just bent my ears toward a new-ish Ann Arbor band (with two albums out) called Pity Sex (check out “When You’re Around”) who are quenching nostalgic thirsts for the intricate, knotty-guitar-slung avalanches of more eclectic 90’s-indie-rock.  And then there was the post-hardcore shreds and guttural guitar grinds from a band called All The Wild Children (a group made up of most of the now-defunct Sharky & the Habit) – but whose faces, voices and instrumental stylings are likely already familiar to Ypsi rock crowds (check out “Breaker Breaker.”) They play at Woodruff’s in Ypsi on May 5th.  An eighth song for my list would be from a Detroit-based collective with some Ypsi-ties: Infinity People is a staggering (super) group made up of more than a dozen avant-garde, psychedelic/noise/performance-art-leaning rock provocateurs – They’re double album In Love With The Light came out last month on Fred Thomas’ label LifeLike.  And while I’m on the subject of singer/songwriter Thomas, one of his most revered projects, Saturday Looks Good To Me, reassembled last month and recorded their first proper album in five years, which is coming out this summer on Polyvinyl. Anyway, that’s what I’ve been listening to, so far.