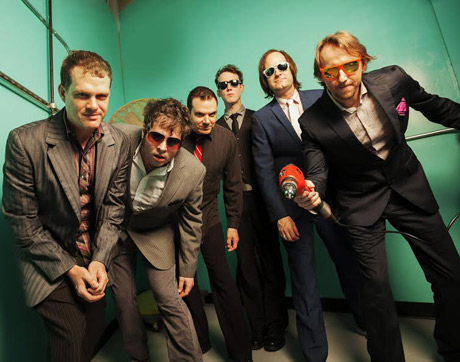 Some people like to find happy mediums, but Electric Six seem to have found a hurried medium.

Just like sharks risking demise upon their deceleration, the long-running disco-rock ensemble can’t stop. Won’t stop! …Or, will they? Maybe? Well, they sorta did… In fact, last autumn, their usual European tour was postponed when the band’s singer/founder & main-cog Dick Valentine took some time off for the arrival of his second child.  But they nevertheless haven’t relented in a regular itinerary of yearly album releases.

Their latest, How Dare You, came out last October. Their 13th full length album is an aerodynamic bunch of guitar-centric rockers, a few slower and synthy tunes glide through the middle, but for the most part, it reaches urgent, angsty, anthemic velocities with some seriously catchy choruses that blur the line between sobering and satirist.

All E6 records can feel timeless in their own ways, because they each have tapped into some key genre mainstays – primarily a variation between disco or new wave rhythms, with expressive synthesizers threading around gritty guitar riffs. And of course, that growly, kinda croony, theatrical voice of Valentine’s….

I’ve always thought of their musical mixture as sounding like if The Cars and KISS crashed into each other in front of Thin Lizzy’s house, while they were each enroute to see New Order perform a cover set of INXS songs…. But at the end of the day, their genre is: “fun…”

Valentine’s been running this musical marathon for more than 20 years, now, to the point where he can only glance back over his shoulder and realize “…that at this point, I’ve basically killed my resume.” A short burst of a chuckle interjects before he finishes his thought. “There’s nothing else (besides music) that I can do. I could try, but it would be…, it might be too difficult. It’s pretty cyclical. But I’m very happy with where we’re at. I constantly have, in the back of my mind, the realization that I could be working at a hardware store or something… Not that there’s anything wrong with working in a hardware store. But I’m very thankful to still be doing (Electric Six), and we’ve kinda done whatever it takes to keep it going.”

–
Electric Six
Wednesday, March 21
Small’s Bar in Hamtramck
8pm
E6 will perform a completely acoustic set of some of their best and most appropriate materiall, to be recorded and later released in October 2018 as a double album, Chill Out + a Very Electric SiXmas 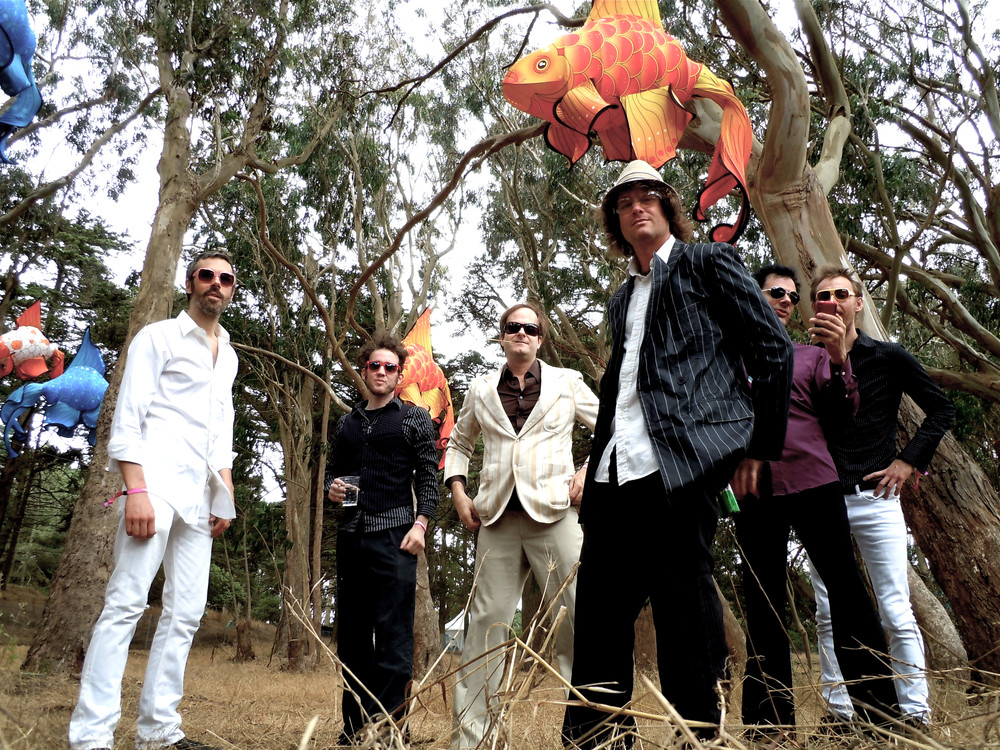 The Electric Six have always found a second home here in Ann Arbor – with especially memorable shows at the Blind Pig. The band was born in Detroit back in the mid-late 1990’s, when Valentine fronted a garage rock group called The Wildbunch. That band morphed into Electric Six, and Electric Six subsequently skyrocketed to worldwide notoriety after success in 2003 with songs like “Danger! High Voltage” and “Gay Bar,” both now staples for sports arenas or rock bar jukeboxes.

Valentine and The Electric Six haven’t really looked back, since. Instead of recreating those singles, they’ve opted for a nose-to-the-grindstone approach of honing riff-rock hybrids of discobeats, crooning vocals and subversive/thoughtful lyrics that are half punk-poet-commentary/half tongue-in-cheek.

We thought that if anyone could be a candidate to write a How-To/Self-Help book for bands & musicians, it’d be Valentine… So we asked him to consider chapters on…

A Constant Reservoir of Riffs
“We’ve always had great musicians in the band. But I also think that what we’re doing isn’t very difficult. We’re not King Crimson or Pink Floyd. We’re writing verse-chorus-verse-chorus, so if you have a year, you can knock that stuff out. You have a six-man band and every one of them can write music, so it really just takes each person writing two songs a year, and…, there ya go, there’s an album.”

Compelling lyrics and cohesive albums
“I always try to have fun with my lyric-writing. I realize I’m kinda in the minority of musicians who don’t look at music as the end-all/be-all of everything, so that’s how I’ve always approached it. Don’t overthink it. I’ve never tried to make the perfect record… It’s supposed to be fun; it’s supposed to be entertaining. Analyzing guitar tones, production, or things like that—I understand those things are important, but at the end of the day, you can only be who you are. Music should always be fun. Secondly? It should be fun! Thirdly? It should be fun, and worry about whether it’s good somewhere after that.”

Social Media / Self-Image
“We have an incredible fan network! I don’t think our band or our presentation is doctrinaire. We don’t worry about looking cool in photos and we know we don’t look cool in photos. I think people identify with us; we have a lot of fans who tell us we’re the only band they listen to, or that we’re the only concert they’ve ever come to see. You should kinda make music for people who aren’t obsessed with music—that’s the kinda approach we want; we want to be fun, we want to be an escape. And from my perspective that’s all it’s ever been. Once things get too serious, then I start to shirk away from that.”

Rigorous Schedule
“Maybe a break would serve us well? But the thing is, this is how we make our living. We try to be cognizant of it. But we also have a group that enjoys being on the road, and it’s really worked well for the last several years, so we try to keep doing it. This is a fun job and that, to me, that’s the main thing—it’s my job, it’s not a calling from God, ya know? But it can be tough, we can feel like sharks—like if we stop swimming, we’ll die. We probably could use a year off, but until we really actually reach the breaking point, we’re not going to…”

Time Management
“Speaking for what works for us? We live year to year, basically. And this year’s already booked up.

Last question, regarding your most recent album: How dare I…? How Dare YOU?
(Laughs)  “…It’s not a question! It’s a statement!”

How Dare You is on iTunes and Spotify. You can also find three solo albums from Dick Valentine, including 2017’s Robocalls.