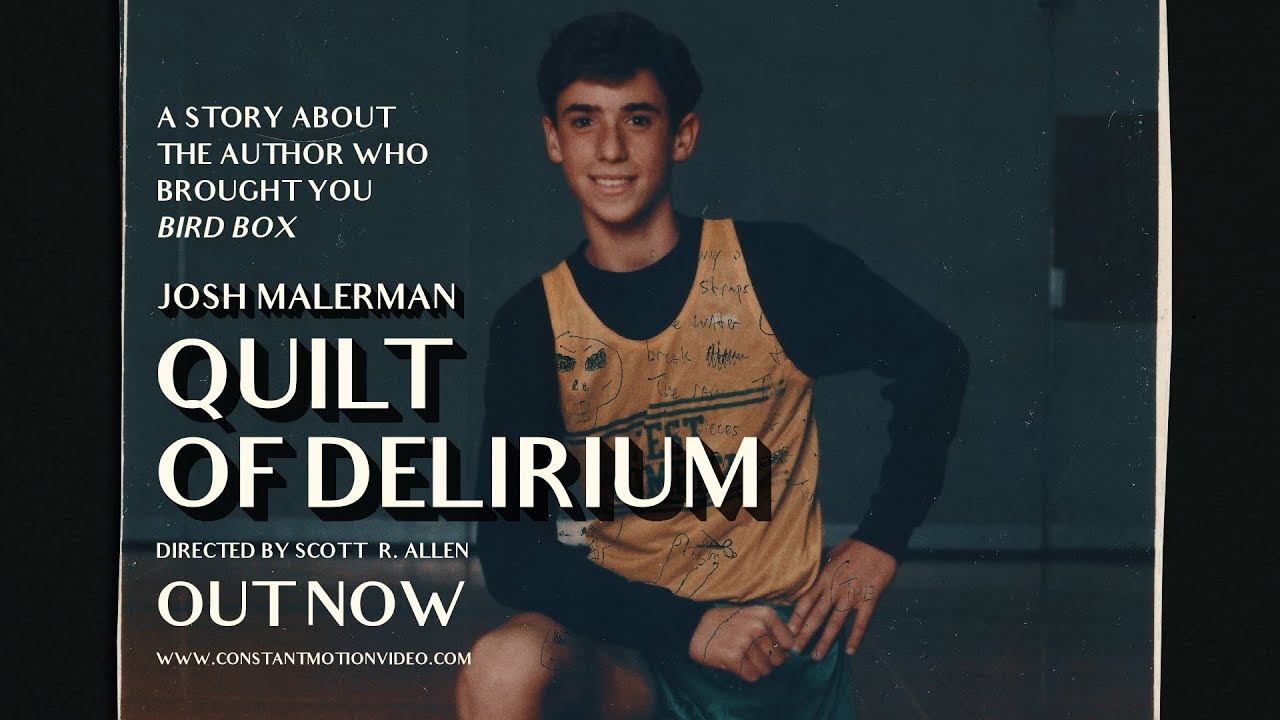 A Livonia native, Allen moved to Ann Arbor seven years ago to work for Automobile Magazine. While this fatefully aligned him with his future wife, Heather, it wasn’t until he joined the team at Constant Motion Productions when he felt truly at home.

He’s more or less been out of the music game since 2011, but has since been developing his talents in the visual arts. Thunderbirds Are Now certainly made a handful of memorable stops in Ann Arbor, Ypsilanti, and even Lansing, during their run, which saw Allen and his brother Ryan out on the road several months out of a year, with notably high-profile attention and praise from hipness-bestowing outlets like Pitchfork. 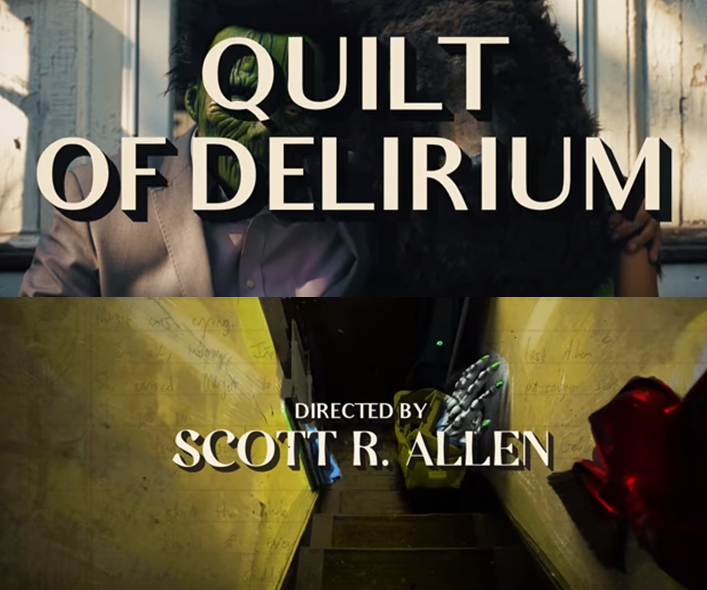 Malerman is also the lead singer/guitarist for Detroit-based power-pop quintet The High Strung, and Quilt serves as a dual narration of Malerman’s life, primarily as a writer (be it of lyrics or of novels), and then as a member of a band that’s nearing 20 years of performing/recording & touring together. Allen’s first foray into filmmaking was in 2010, framing Ypsilanti-based veteran arts/culture photographer Doug Coombe.

Quilt is timed with the release of Malerman’s latest novel, Goblin, but what subtly shines throughout the film is a tacit bond built between Malerman and the filmmaker behind the camera, foremost as musicians who were heavily active in their respective bands at the same time period (2002-2010). But as Allen tells us here at The Current; he’s become inspired to be a storyteller. Most of all, he’s inspired to share the stories of dynamically creative personalities like Malerman.

“I’ve always loved movies; movies and music always went hand-in-hand,” Allen said. “My dad and I would go down to the local video store and I’d walk through the aisles just admiring all the artwork on the VHS covers—especially the horror film covers. It really turned something on for me. And so, Doug (Coombe) is a very interesting character, to start with, but Josh (Malerman) is also very interesting. But, unlike him, I’m not a writer. I’m not a writer by any means, that’s probably why I stopped writing songs. I’m not someone who feels comfortable taking a pen and writing my feelings down. That’s not me…”

“But I like (the) documentary (artform) because the story just sort of unfolds as you go; it’s sort of abstract in that way. You kinda work with what you have and you work it all together.”

Allen admitted being nervous to start the Malerman documentary, since he’s “nervous by nature.” He claims he’s not a good conversationalist, but this writer found him to be quite eloquent, energized, and engaging for this interview…anyhow. “I guess I’m just more one to sit back and listen. (Constant Motion founder) Tom (Wille) and I came up with up with the questions for the interviews, but it was actually Tom who conducted them. “

Allen said that watching Errol Morris’ The Thin Blue Line when he was in film school wound up being a formative moment for him. “That’s when I realized that you could do more than just interviews (with documentary), you could do reenactments.”  He also keyed in on televised true crime and mystery productions like Unsolved Mysteries, which relied almost entirely on reenactment scenes. “They were like bad-good! Almost like a great B-horror film.” As you’ll see, Goblin, also utilizes this technique to heighten the narration. Allen’s stepson, Sebastian Willard, plays a young version of Josh Malerman in the film; his nextdoor neighbor, Robert Webster, was cast as teenage Josh.

Documentaries, visual storytelling, energized Allen—he admits that books were just never able to excite him and a mode of information delivery, be it fiction, history, or whatever. Malerman’s breakout 2014 novel Bird Box just happened to be one of the few novels, albeit horror, that really grabbed Allen. When Constant Motion Productions encouraged Allen to start perusing more passion projects, he knew he wanted to get in touch with the writer of that fateful book.

“I’ve always been interested in people who love what they do, people who are very dynamic, but who are also down to earth; ya know, people who deserve this kind of attention. That’s what attracts me as a documentary filmmaker.” 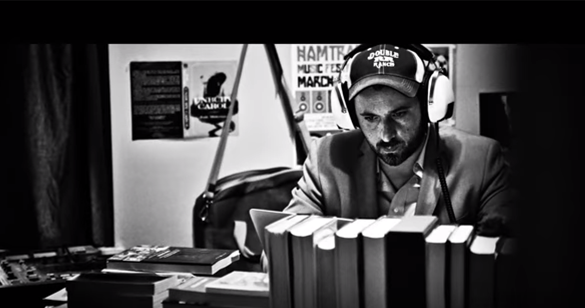 “(Malerman) is just this well-rounded creative person; anything he touches is going to be interesting and the people who surround him or are drawn to him are also interesting. The High Strung became part of the documentary because he wrote a lot of his first books while he was in their van on tours. Without that lifestyle, some of those books probably wouldn’t have been born!”

Allen approached the editing process as though he were arranging a song. “The verses are the biographical information, but when his novel writing starts coming in, those are like the choruses. I edited like I was writing a song.”

The killer soundtrack is composed by Joel Roberts of the band Golab. Joel and Allen met, similar to his connection with Malerman, they were playing shows together with their respective bands on various tours over the last decade.  “Most every good horror movie has a memorable soundtrack. It was important to try and have something memorable and fitting for the film. I think Golab did an excellent job hinting at classic horror soundtracks, but it’s not at all a throwback; it sounds fresh and new.”

Allen said that he can’t think of anything else he’s been this proud of before….  “Besides marrying my wife, that’s number one, of course….in terms of my best decision. But as a creator? This was definitely something that I finally felt I could say: ‘Yes, I can show this anywhere… I won’t be embarrassed about it. I mean, I’d always been uncomfortable with myself. But this time around, I really felt like I knew what I was doing. I am proud of everything I have done up until now….but it’s that, until this, I never really felt something was truly 100% ME! I’m finally happy where I’m at, in life. I’ve got the best wife who I love deeply, and an incredibly smart and funny stepson. They inspire me every day.”

Allen concluded that he doesn’t like learning about people through social media. That’s boring to him because there’s no digging involved. “You don’t have to dig through someone’s mind anymore with Facebook or Instagram—it’s just all there. I’d rather learn about people with an actual conversation. And, as an art-form, I’m now expressing it through making documentaries.”

Documentaries are a powerful art form, sure. They’re also just a powerful way to get to know someone! “The way we get to know people, now, is really after clicking ‘Add’ on Facebook, but that isn’t real; it’s just for show. Since social media came around, I don’t feel like I’ve made a lot of ‘close friends,’ just a lot of ‘acquaintances’ that you sorta nod-at if you actually do see them in real life. It’s sad, really. So, (social media) bores me. I feel like now, making a couple documentaries on people who actually deserve real attention sorta fills that empty void for me.”

Allen hopes to continue making movies about people who he respects; people who are real.