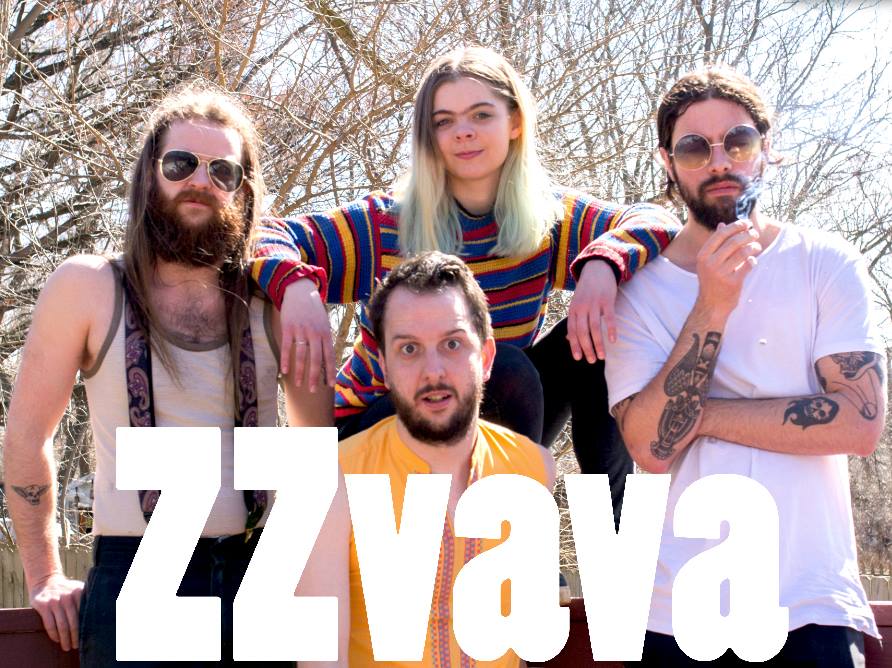 I’ve been writing for The Current for almost 10 years now…, which is crazy to think about. But I’ve known musician Jeffrey Freer for longer than that, from previous bands as well as some of his solo material. He was an Ypsilanti and an Ann Arbor regular for years, but moved away for a spell. Lo & behold, I’m in Vault of Midnight the other day and I bump into him; discovering he’s been back in town for more than a year, I also find out he’s part of a newly formed band.

ZZvava made themselves known to the world of social media earlier this year, and put out a super EP’s worth of demos on their bandcamp two months ago and it’s time you had a listen…
ZZvava features Jordan Collingridge (of Telementals), Anie Parker (of Cig Butts), and Nick Zomparelli (who has played in several groups, including with Freer in the short-lived Real Spicolis). Each member has individually pushed the bounds of rock n roll into refreshingly weirder, off-kilter territories. The rhythms and the riffs may feel familiar, but the vocals could be distorted, the solos could be gnarly, the time-signatures could shimmy into cartwheels.

ZZvava play this Saturday at The Blind Pig
with Wild Savages, Prude Boys, and the Heavy & Beyond DJs
MORE INFO

The demos kick off with “Enjoy The Show,” a charmingly shambolic blender-ized combo of Supergrass’s “Alright” and Billy Joel’s “You May Be Right,” and that’s indicative of the flavors they’re going for – a (sort of) throwback (if you will) to a fun, shake-it-up kinda rock n roll; the kinda stuff you turn up on your stereo as you put the top down or the summery serenades you’d have stuck in your head while bare-foot jogging across the sand into the gaping blue lake ahead.

The song we have streaming ahead has a beat that never lets you go, an instant foot-stomper, with expressive intertwining guitars that unlock the body and move the crowd to dance. And yet, there’s still the gnarly factor, be it the distortion or reverb, or the gritty vocals – something I love about not only these demos but the signature little dents and scuffs that each individual player have made to conventional skateboard of rock n roll, giving it a groovy wobble in their glides.

Each player trades off instruments from song to song, not only on the record, but also on a stage; so you can expect something unique every 3 or 4 minutes. But sustains throughout is this unabashed fun-loving kind of devil-ish spirit, something you always recognize in great rock n roll, be it MC5, Buzzcocks, Cheap Trick, AC/DC or whoever… If there’s a longer rail to grind that metaphorical skateboard down, then they wanna find it. If they empty the lighter fuel bottle to get the bonfire higher, they’re gonna try it. If they can get louder, hit harder, or just throw themselves further into any song or guitar solo….then it really sounds like they’re gonna try it… That, at the end of the day, is rock ‘n’ roll.