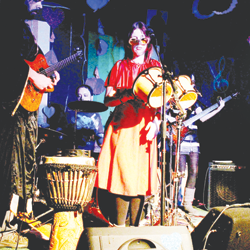 Convinced this local music scene’s nothing special? You should meet Chris “Chewy” Anderson. Actually, anyone  convinced that modern music’s lost its magic, should also probably talk to this local singer/songwriter/show-organizer.

Anderson has culled 33 local music acts, bands and songwriters from Ann Arbor, Ypsilanti and beyond, spanning all genres and performance styles and slotted them into packed line-ups inside six different venues for three day’s worth of live musical performances. Tennessee can have their Bonnaroo; we’ve got our own music festival: Anderson’s YpsiArboroo (June 8 – June 10).

New around town? Curious what these twin-cultural outposts have to offer, musically? Anderson’s expansive and ambitious showcase bridges from one city’s Blind Pig to the other’s Woodruff’s while also stopping at various hip hubs off the beaten path, including Anderson’s own personal residence, “the Alexander Hamilton House” and Mr. Mike’s Maidstone Theatre, the birthplace and  “home venue” for his band.

The Vagrants personnel fluctuates; it was founded several years ago with fellow musicians Harrison Zamperla, and sustained by Joseph O’Dell, Casey Dickerson, Alexis King, Michelle Labelle and countless others). Anderson’s entourage (and YpsiArboroo) seems out to preserve the vitalities yet re-imagine the possibilities of live music. That’s partly why so many cutting edge indie-rock, punk-pop revivalist outfits and even Americana songwriters like Chit Chat, The Old Adage, Disinformants, Ferdy Mayne, Deep Space Six and Zombie Jesus & The Chocolate Sunshine Band all hopped onto this year’s festival.

What can happen when a group of musicians assemble in a small group (say, three to nine-ish players) and just jam? Anderson’s music label, Intellect Records, has been curating an experimental showcase series at the Maidstone Theatre (inside Mr. Mike’s Lounge in Ypsilanti), inviting numerous groups/musicians to take part in 30-minute free form “stage jams.”

The Vagrant Symphony perform at Woodruff’s later on in June but you can also see Nicole P’Simer, a flagship artist of Intellect Records, on May 31 (also at Woodruffs). The Vagrants, meanwhile, play The Ugly Mug in Ypsilanti on May 31, part of the Madhouse Poetry Nights.

If you’re interested in these jam-ceremonies at Mr. Mike’s, there’s a “carnival-themed” showcase on June 1 that leads into the Festival’s scheduled “kick-off” performance (starting at 4:20pm) on June 8 – with the first host-venue being the Pontiac Trail House in Ann Arbor. More YpsiArboroo-curated live music acts play the Blind Pig later that evening, around 9:30pm. Find ‘Intellect Records’ on Facebook for further updates / information.

One Kiss Re-starts It All
Meanwhile: Iconic Ann Arbor area chamber-pop mainstays Saturday Looks Good To Me reunited last year, and will release One Kiss Ends It All, their first album in six years, on May 21 via Polyvinyl Records. SLGTM’s main art-pop-architect Fred Thomas reiterated the group’s collective ebullience and overall excitement over what should be one of their best (if potentially beguiling) records. He coyly enthused/warned that Kiss is “deeply collaged” and that parts of his “vision” may be “imperceptible” upon initial spins. You can stream their first two singles (saturdaylooksgoodtome.bandcamp.com) and see them live for an ostensible One Kiss release concert in Ferndale (at the Loving Touch Pool Hall) on May 25.