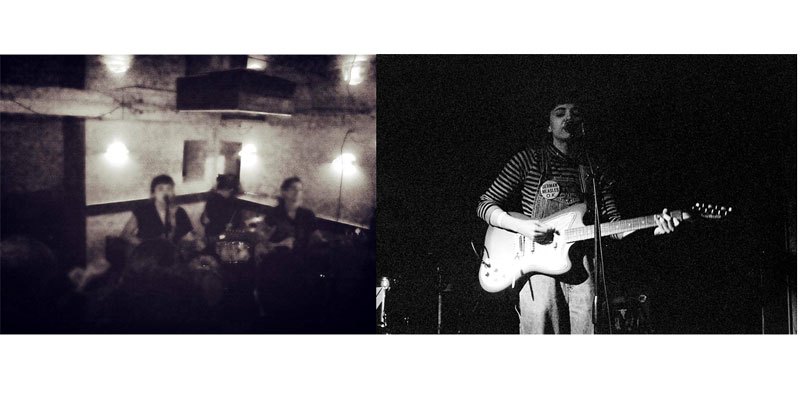 I was in a record store the other day and the phrase “…a new modern classic…” came out when we started talking about Ypsi-trio Rebel Kind’s most recent album, Today. Singer/guitarist Autumn Nicole’s entrancingly hazy/velvety voice soars over reverb-splashed strums as drummer Amber Fellows and bassist Shelley Sallant provide a buoyant, surfable rhythmic undercarriage to kick just the right amount of propulsion and groove into these enchanted paisley folk-pop daydreams. Then again, as Autumn noted, Today could be all over the place. It could be a sweet lullaby, it could be a scorched torch ballad, it could be fractured surf-punk or it could be indie-folk. It could be whatever it wanted to be…

That said, Rebel Kind are joining Detroit trio Deadbeat Beat next Friday at the Blind Pig when they open for this early century prime post-post-punk outfit, Protomartyr.

If any of you were at Mittenfest (at Bona Sera) on New Year’s Eve, then you were privy to an exclusive hybrid of both Rebel Kind and Deadbeat Beat, sharing one big set and collaboratively bolstering each other’s songs. Very cool. Deadbeat Beat put out an album two months ago; Rebel Kind are just finishing up in the studio with Today’s follow-up.

We caught up with Autumn Nicole this week to chat about Rebel Kind, just as she was posting a new solo-EP that she worked on with Fred Thomas called Let’s Keep Things Weird. Expect some cassettes to be available, at some point, (depending on the availability of a tape-duplicator… anyone out there got one?) Things Weird features two covers (Smiths / Roy Orbison) and this terrific, twisty-slide tumbler, “Deja-Vu Romain.”

Autumn Nicole: I recorded these songs with Fred (Thomas) back in December. They’re sort of all over the place, but sort of me. They are various ideas, songs I've had in my head for a bit. Kind of an odd assortment.  Big ups to Shelley (Sallant) and Amber (Fellows) for helping me out on these. And, the most insane, never-ending thanks to Fred for always being open to helping me with my vague ideas and experiments, and just being the best person to record with, ever.

What can you tell us about the newest songs? How are they distinguished from what we’ve heard, already, on Today?

We’ve been playing them live for quite a while now. There are more overdubs on these songs. There is a higher quality of production, I think. We wanted to expand more than just the drums, bass, guitar, vox arrangement of Today. I think the new songs are all over the place, just like Today. Some are more mellow, some are more poppy, some are more rock n’ roll. Sometimes there are very specific influences on a song, though most of that only comes out in my head. For instance, we’ve got a song we refer to in the group as “…the VU Loaded one…,” and another as “…the Young Marble Giants song…,” but I don’t think the songs really come out sounding explicitly like those bands. It’s an influence in a more abstract way maybe.

Hmm, I can’t think of anything off hand. As a female musician, it’s always really cool to talk to women in the audience after any show and have them tell you that seeing you made them feel like they would want to, or that they could pick up an instrument. I kind of always like hearing how different people hear our songs in a live setting or through the recordings. We’ve had people reference Wire, The Urinals, Elliott Smith. Again, it’s just cool to hear different people’s interpretations of what you are doing.

What else is new? What’s coming up? How exciting is it, going into this Protomartyr show?

Stoked to be on this Protomartyr show because I’m using it as part of my weekend birthday celebration. But, also excited to play with our really great friends Deadbeat Beat. I’m excited to eventually share the (new Rebel Kind) songs with everybody. Everything feels very up in the air, but also full of potential.