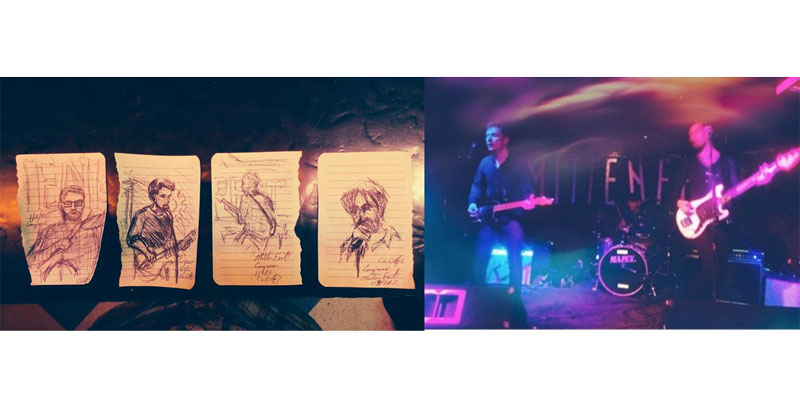 Usually around this time of year, I’m spending the introduction of my columns commiserating with readers about the anguish of accumulated snow, the dagger chill of morning frosts, the discouraging drop in temperatures… But we’re Michiganders! This year has been like nothing!

I mean, I’m quelling an anxiety-inducing dread over degradations and climate-disorientations wrought from massive discharges of carbon dioxide, thus resulting in this unnatural winter of ours. But there’s no complaining. No. There will be no complaining about snow in this column’s intro, regardless if this time of February is typically soul-crushingly slushed-up and frost-chomped…

Café Ollie had some renovations recently. When was the last time you visited them in Depot Town? What if they hosted some rock bands? Would that entice you?

Two Detroit bands are coming to town: Destroy This Place and Undesirable People. The latter just re-released their album Eternal Vision of a Blind Future via cassette (on Head2Wall Records) last month, while the former celebrated their third (and best, yet) last October, titled Animal Rites (via Forge Again Records). The headliner will likely be Ypsi’s own post-punk specialists, Congress. Destroy This Place and Undesirable People are going to be playing in Detroit the following evening (Saturday), for those of you who miss this show, or perhaps just happen to live there, already, as opposed to living in Ypsi.

ALSO on this lineup at Café Ollie is Minihorse, a newer indie-pop trio that dabbles in the cerebral, heavy-hearted realms of neo-folk and spacey-surf-blues. Minihorse are pictured up there beside sketches.

Over in Detroit, several bands are performing at a benefit concert for water rights in Detroit. This is actually the 2nd Annual Water Rights Benefit, inspired, initially, by the infamous water shutoffs during the late winter and spring of 2015. The Detroit News recently reported that a third of all residential accounts in Detroit— 68,000 of 200,000 — are at least 60 days past due, city records show.

There’s rock and then there’s pop….and then there’s pop-rock. I mean, it’s got more muscle than indie and sharper teeth than folk and it’s got way more charisma than just any other Americana-revivalist trip… I’m talking about The Walking Beat. this Detroit-based quartet has been steadily building up its pace and is now swiftly stepping forward with its debut LP. Joining this celebration concert at PJ’s Lager House is the ferociously elegant High Strung, the dazzlingly disorienting Colorwheel and the up-and-coming psych-rock specialists Flowers Bloom. You can get a copy of Walking Beat’s record just by showing up (and, you know, paying the cover charge; still a sensational deal!)