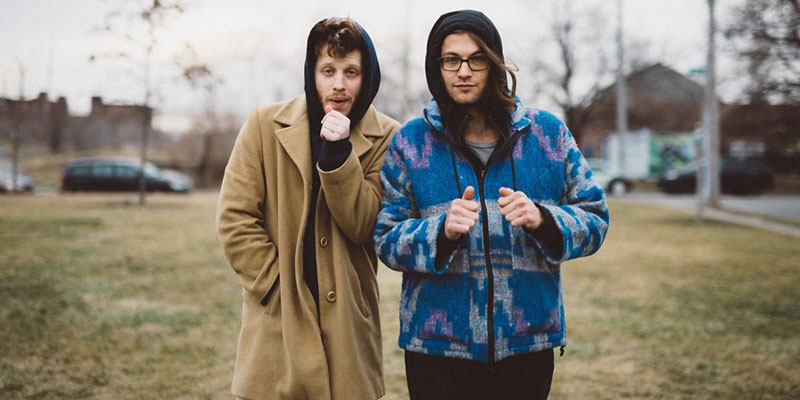 Gosh Pith are a couple of charmers. I wavered a few minutes over to whether or not I should write the ensuing sentence after this colon, but: Gosh Pith are probably going to blow up big time after this next record comes out. The Detroit based duo have been receiving more and more buzz since they released their proper debut, a sly, smooth, R&B-revamp of fuzz-pop and indie-electronica called Waves back in 2014.

Josh Smith (vocals, guitar, electronics) and Josh Freed (beats, electronics, production, backing vocals) have been melding their musical minds together for three years after studying at the University of Michigan and setting up their sonic shop in Detroit. They’ve since released the Window E.P., a hip-hop-inflected, haze-fringed, melodic-meditation of late-night/early-morning daydreams and irresistible grooves, blending dazzled distortions with myriad synth effects and sampled percussive hooks under Smith’s gossamer voice. Those charms got them noticed by big name publications like SPIN and The Guardian, along with opening slots for JR JR and a tour with Passalacqua.

Current: Gold Chain came out last February. What was the recording experience like? What kind of trip, vibe or headspace were you guys hoping to find with this record?

Josh Smith: The process was mostly just a product of our way of life: living together and having a lot of beautiful friends coming in and out of our house pretty often, it was really wavy. We made music constantly and then we would stop to capture something that matched each moment.

Josh Freed: For whatever reason, these four songs ended up being ones that we pursued harder and faster than the 20 or so others that we’d been working on sporadically. We realized together just the other day that the record is kind of like a classic Greek love story. Gold Chain, is the initial infatuation period, K9 is the siren song, a story about intoxicating love. New Balance is about running from the cops and getting f**ked-up by broken hearts. And Scoop is a beautiful denouement about love, longing, loss.

Tell me about development of your individual and collaborative approaches to songwriting, production and live shows.

Freed: Every song on the Window E.P. was written, recorded and finished before we had ever played a live show. But now we know exactly what kind of energy we want to have in our live set, and its informed our songs and production process.

Smith: Now I have an intense respect and admiration for great live vocalists and musicians; a lot more after playing in different cities with other bands. I’m not that analytical about the songwriting, but I’ll say we like to make things for emotion and pure-feel sometimes and for function other times.

What’s stayed the same, since day one?

Smith: The dynamic; that’s pretty constant. (Freed) has the tones-knowledge and I am always creating musical and lyrical ideas with whatever is around. We still experiment a lot musically, and (Freed) still picks where to eat (on tour) and figures a lot of other things out that would take me a lifetime to decide or decipher.

Talk about connecting with your listeners and engaging an audience. You guys seem to have a keen appreciation for that and really hone that artist-listener synergy.

Smith: That’s just natural from coming up in Detroit; you’re always starting out playing shows where most of the people in attendance are other artists and, thereby, reciprocal inspirations.

Freed: When we moved to Detroit, we had just started and we went around to shows and parties telling everyone we were in a band. We could have been making it all up, but one-by-one, as we met people, everyone responded positively. Everyone at our first show was also a musician. That taught us a bit about how to connect with a wider audience.

Friday, April 13 at the Blind Pig

Appleseed Collective specialize in a sweet slug of ragtime and dizzy Dixieland revivals, old-timey string-band jams and New Orleans jazz jaunts, plus some signature Michigan-molded folk. They have a new E.P.’s worth of live recordings called Tour Tapes coming out this month. Recorded live, with no overdubs, during the quartet’s best moments of 2015, these five songs capture that characteristically breathless theatricality inherent to each set.