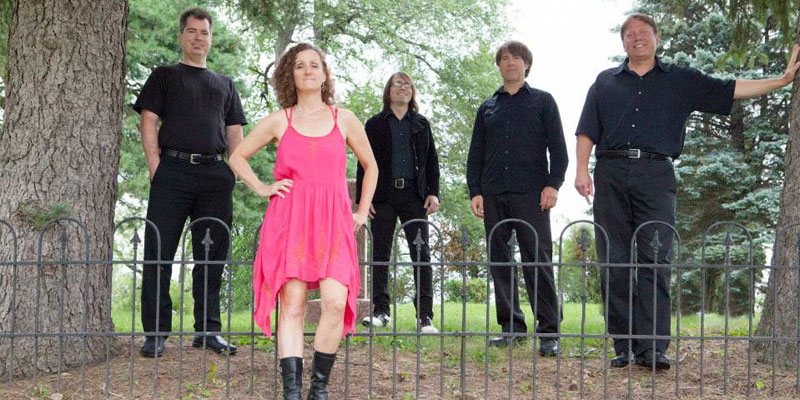 Nessa explores so much more than Celtic Rock or Celtic Fusion. While those may be the words you hear others use to describe the local quintet’s transcendent tunes, you’ll probably get a better impression of their nuanced blend from the live presentation.  Vocalist/flutist Kelly McDermott leads this eclectic ensemble, with backgrounds ranging from folk and bluegrass to rock and jazz, but traditional Celtic songs are the energizing nexus where these sensibilities merge.

McDermott and her partner Rob Crozier started this band back in early 2014, with a handful of classical and folk-tinged songs to start with from a previous band. Crozier is a multi-instrumentalist specializing in jazz while McDermott is a classically trained flutist who has three degrees in classical flute performance and has a decade’s worth of experience working as an orchestral and chamber musician all along the East Coast.

Something happened to her, though, when she discovered traditional Celtic folk music. Like some new spirit inside of her, dormant until then, came alive. “I’d always joke to people that I was actually a frustrated folk singer,” explains McDermott, speaking of her days exclusively playing the flute in the orchestra. “It was like a prairie fire, once I first sang in public. Singing these Celtic songs, that was it for me; it just took over from the Classical.”

McDermott and Crozier are joined by a range of regional players with tons of talent and experience, including David Mosher, Alex Anest, David Mansfield, Todd Glass, Will Osler, and Colleen Shanks. Their specialty is reimagining (and in some ways resurrecting) ancient Celtic folk songs and giving them a bit of rock ‘n’ roll fire.

“These guys are such unbelievable talents. All they had to do was hear the melodies I sang a few times and then (Crozier) came up with some incredible bass lines and that was it,” said McDermott. “Alex gets really jazzed and so he creates what we like to call ‘Spaghetti-Celtic,’ while Todd, on drums, really drive the whole thing. It strays a little bit with David Mosher with his bluegrass influence on the mandolin and fiddle but he winds up being drawn back to the Nessa sound.”

The band released their first CD last year as a means of jumpstarting the project but it didn’t really get going until early autumn 2014, when McDermott returned from a teaching gig in Berlin. They played 17 concerts this year including some notable festival spots. They started working on their latest, Ancient Song Discovery Project Vol. 1 back in May and McDermott’s felt very excited and grateful that audiences seem to really be digging the newest songs.

The way McDermott describes it it’s as though she and Crozier are almost like sonic archeologists. When they find material for Nessa’s specialty resurrection devices, they are often exploring libraries, archives or even YouTube for some of the oldest and some of the most obscure old songs from all across the Celtic nations, including England, parts of France and of course, Scotland and Ireland.

“I’m just really attracted to weird, sad, bizarre stories about mythological creatures and lost loves and losses at sea from around the UK,” said McDermott. “I find these songs…there’s usually something haunting yet beautiful about them. And then I just play the song constantly for a week until I sit down with Rob and then we change things around, change the meter, add certain instruments. Rob’s very gifted in that way. I’m very fortunate to have him as my partner.”

When the group performs these melody-rich odes and intricately layered ballads, McDermott considers it “sharing” as opposed to mere entertainment. It’s a manner of feeding energy into the crowd and establishing a sort of musical dialogue with them; to the point where it’s not only enticing because of the propulsive beat of their jigs or the more dynamic element of guitars and mandolins, but because McDermott, through her endearing demeanor as a singer and her captivating performance style, creates an avenue for the audience to engage with the music on a deeper level.

“I always say, at every concert, that we love to meet new people and we encourage they come up to us and talk after the shows. To get that engagement and hear their feedback, to be asked to hug someone after a show, that is wonderful,” said McDermott. “It’s a beautiful thing.”

The band’s music is a respectful nod to folk and traditional Celtic styles, despite the sometimes iconoclastic suggestions of a phrase like “fusion.” From here, aside from hopes of one day taking her band to Ireland so that they can see the magical land that inspired her so much, McDermott is also hopes to tour beyond Michigan and even outside of the Midwest.