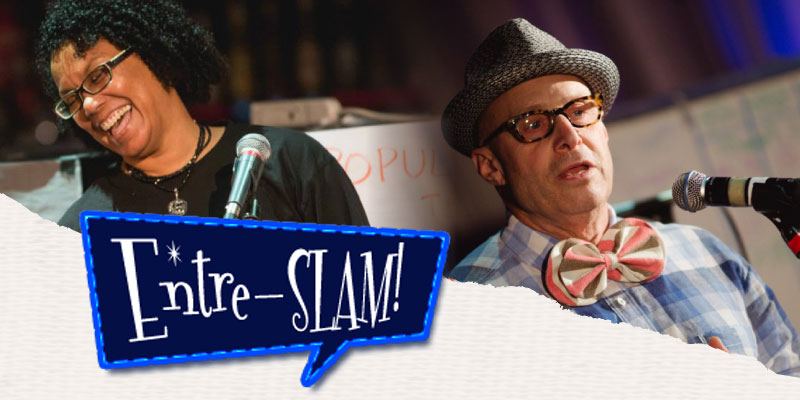 Traditionally, the business world is a black-and-white realm. Profit margins, sales pitches and corporate buzz words that attempt to make the practice more humane. In recent years, we’ve seen a concerted effort by certain business people to bring meaning to their work lives and products.

TED is one such example of successful people seeing more than dollar signs as the impetus for work. The TED slogan is “Ideas Worth Spreading” which smacks less of boardroom buzzwords and more towards making positive contributions to society within the framework of a profitable endeavor. Narratives about trials and triumphs in a meeting-of-the-minds-styled showcase. No real attempt to slay the dragon, but there is heart and hope in these stories.

There are other similar organizations with lofty aims. One such outfit is Entre Slam, incubated in Ann Arbor, and while venues now extend to the Detroit area, this is still very much an enterprise rooted in Washtenaw County.

Enter long-time Michigan resident Christa Chambers-Price, founder of Entre Slam, an entity that uniquely marries TED and Moth Story Slam. While Entre Slam is very much its own competition, it does take its tournament-styled cues from Moth.

Current sat down with Christa to discuss the past, present and future of Entre Slam:

Current: First off, tell us about the next Entre Slam event.

Are you a writer, English major?

You obviously have a business acumen, did you get an MBA as well?

No, just a BA in English Literature with minors in Russian and Spanish.

How long have you been in Ann Arbor?

Pretty much the whole time since I graduated. After graduation, I went to General Motors and did the whole tech writing thing. I didn’t aspire to be a writer, actually I wanted to be a doctor. What’s really interesting is how my career evolved from being a tech writer to a website developer to marketing strategy guru..

You write code as well?

That’s interesting, most writers won’t go anywhere near that.

I always go where most people don’t go, that’s what I do.

So let’s get into the meat of Entre Slam, the model seems to be Moth Story Slam with some TED Talks thrown in.

It started off following the Moth model. Eight entrepreneurs would get up and tell a story around a theme. It was fun, we were in bars, networking was easy because people were just being who they were, without all the pretense. We launched in 2012, but by the end of 2013 I recognized something was missing. Most entrepreneurs were giving decent presentations, but we weren’t having an impact beyond that night. I shut the events down in the beginning of 2014 for the whole year. That was an opportunity to see something was needed and, that was helping entrepreneurs tell their story. Much harder to do, because that story goes deeper than the (typical TED) origin story. When we relaunched in April of 2014 it was an experiment. It’s scary for these entrepreneurs to step out from behind the product and say this is who I am and connect to people in a whole different way.

This is a competition. What does the winner get?

The top business storyteller will receive $10,000. Winners from each of the three events will compete in The Finale at The Ark at the end of the year.

This is an Ann Arbor venture, but you’ve made some inroads into Detroit as well. Are you still Ann Arbor-based?

We used a few venues in Detroit, I still work out of Ann Arbor. In 2016, we’ll be in Ann Arbor still, but we have plans for Chicago, Seattle and Ohio.

So the long-term goal is to go national, is this a for-profit enterprise? Five-year plan?

Yes, we are for-profit. By year five we’d like to have 50 events going on at any one time.

The list of speakers for the October event includes Beezy’s and Urban Ashes. Are the speakers hand-picked or is there an application process?

There’s an application process, once they identify that they want to be a speaker, they go through 3-5 hours of coaching. With each person we have to kind of deconstruct their current pitch.

You actually get penalized for pitching.

Tell us about a few memorable speakers or horror stories.

The most memorable was the first night of the relaunch in April of this year. One of our storytellers that night was the head of a waste management firm in Detroit. When I first met her she gave a typical spiel: “My name is Vicki J. Lewis, I run a waste management engineering firm, my primary clients are the Big Three…” By the time she finished her Entre Slam story, everybody was talking about her. One of the things she shared with me in our coaching is that she always wanted to be an actress. She played on that theme of “I’m a superstar” and now people identify her as such.

Nothing sexy about that. As far as horror stories, we don’t really have any. The only tough night was in November 2013, another competitive event was going on three doors down and they drew almost a thousand people.

That was an eye-opener?

Absolute wake-up call. As far as the storytellers go, for me, every story is amazing, but if you have the courage to get up and put yourself out there, we’re going to applaud you. Not that you get a medal for just standing up there, but what’s made Entre Slam special is that you don’t have to achieve absolutely everything in your business before you’re up there on center stage.

You can be a work-in-progress…

Absolutely. It’s the journey. Some of these folks we have to talk off the ledge.

They’re not into public speaking…

Or they think ‘my story isn’t good enough’ or ‘people don’t want to hear what I have to say.’ But when the applause happens, you see them transform.

Briefly tell us about judges and how Slammers are scored.

We’ve had judges from the New York Times, Ross Business School, etc. One-third for clearly stating your purpose, one-third for presentation and the rest for doing it on time (within five minutes).

A crossroads of art and commerce here.

An arm wrestle. In the coaching, I share with them a personal story. There’s a reason I do what I do, it goes back to my time in the army.

Tell us about that.

There’s eight weeks of basic training and within that a night exercise, a war simulation: live ammunition, tracer rounds, etc.

Where was the boot camp?

Fort Jackson, South Carolina, middle of summer, hot as hell. I was 18. Avoiding TNT bunkers and low-crawling under barbed wire. Intense. The explosions started, getting across the field was no problem for me, adrenalin was pumping. But one of my squad members was curled up against a bunker. She’s petrified, I grab her by the collar and low-crawl with her. We finished the course dead last. One thing you don’t want to do in the army is come in last. So at the end, the drill sergeant came to me: “So you know private, you came in dead last.” Then he turned to the rest of the platoon and said: “But the rest of you failed this course. You left two men on the field.” That night has stayed with me. I’m 48, we can all get stuck on the field in life, but my job is to take you by the collar and get you to the finish line.

No man left behind?

Exactly. That’s what Entre Slam is all about.

So you’re taking this project national, but Entre Slam is still an Ann Arbor property?

Absolutely. Ann Arbor is the mothership.