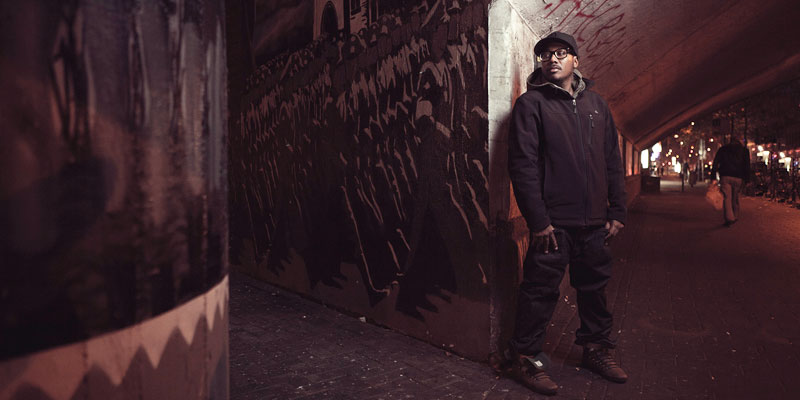 Elzhi was never supposed to replace J Dilla (Rest In Power) when he departed from Slum Village some time before the release of Trinity in 2002, but at the time he was the new third member of a group that had made an across-wave hip-hop splash with Fantastic: Vol. 2 (2000), powered by some J Dilla masterpieces.

El’s 2008 studio debut, The Preface, was impressive. Furthermore, only a gifted storyteller and technical master would dare tackle Nas’s Illmatic, but backed by fellow Motowners Will Sessions Band, Elmatic pays homage to a classic while creating a legacy of its own.

Elzhi is rooted in Detroit hip-hop, having cut his teeth at open-mics hosted by Proof at the legendary Hip-Hop Shop. His second true solo full-length release, Lead Poison, is over four years in the making. Having seen him perform at The Majestic Theatre in 2011 on the Elmatic tour and supported his output since 2002, speaking with him was a privilege:

Current: Are you familiar with the movie Zebrahead?

Yeah, it was actually filmed at one of the high schools I went to, Cody (Frank Cody High).

I ask because your cadence is often reminiscent of Nas spitting on “Halftime.” Talk about your transition from Elmatic to the Lead Poison project.

I wanted to give people something real after awhile, I mean, after Elmatic I was just in the studio recording. I was going through a few things and trying to act like everything was all good and just kinda recording. After awhile it just didn’t feel right. I kinda wanted to come from a personal standpoint, like, just getting things out of me. Almost using my music as an outlet, hence the title Lead Poison. I had a lot in me and it needed to come out.

Current:  You released a video for “February,” (produced by 14KT from Ypsilanti) that’s some pure Michigan stuff right there. Any other videos in the works?

We got some more videos in the works. I kinda wanted to approach this project in a whole different way to try to give it a chance to actually compete. One department I’ve always lacked in was the visual, I wanted to make sure the visuals were on point this time around.

I noticed in the video you were sipping on some Bell’s Two-Hearted. Is that right?

Current:  Let’s talk about some of the content on Lead Poison. The title, at first, seems like a dig at the Flint water crisis, but this project is very personal for you. Tell us a little more about what Lead Poison means to you.

Some people were thinking I was talking about the Flint crisis, but I created that title before I even knew anything was going on out there. Like I say, it really was about me, really getting it out and being honest and truthful with the people who enjoy my music. If I wasn’t able to get this out right now, I wouldn’t be able to transform and flip into different concepts. People know me for being personal or just being a battle MC or whatever. I feel like in order to get back to that and even more, I just had to get it out of me. Now I’m back even better than ever, in rare form, doing what I do. I’m in the studio right now trying to knock out the next joint. I just want to give my fans something honest and true and hopefully be able to touch somebody or connect with somebody with the experiences that I went through.

Current:  Is there any equivalent of the Hip-Hop Shop in Detroit right now?

I can’t say. It’s a couple spots where people come together to create music or perform. But Hip-Hop Shop was something different, like it wasn’t just an open mic, it was a clothing store owned by somebody from Detroit.

Maurice Malone, yep. On Saturdays from 4-6 it became this open-mic thing. Yeah, man. It was something magical. I’m not saying that places aren’t magical for the people coming up now. I can only speak for what I what I felt in that time era and what it did for me and for people like Dilla and Eminem, to name a few. So, yeah, around that time, Detroit wasn’t really looked at as a city for MCs. It was kinda like we were trying to push our way in and be heard. At that time, it wasn’t even known for producers, like Dilla, so we felt like we had to push forth 120 percent to even be heard. Just that energy within that one tiny little room created something amongst everybody there that experienced it.

Current:  Tell us about some of the Detroit artists you work with or some we should know about.

Other artists you listen to?

I like that kid Saba, from Chicago. I like how he puts his songs together. There’s some young spitters out there. I like Chance (The Rapper), Kendrick Lamar.

Obviously Nas is an influence. Anybody else you might want to throw out there?

Current:  Do you live in the D when you’re not touring?

I’m back and forth from LA to Detroit.

There’s nothing I’m really holding onto. There’s a song that me, Proof and Bizarre from D12 did over a Dilla track that never came out. That was actually the first Dilla track I ever got on. I was with a crew called FOD and we recorded to a Dilla track that D’Angelo ended up using for the “Me and Those Dreamy Eyes (Of Mine)” remix. That’s floating around somewhere. But yeah, I ain’t holding on to anything.

Current:  “EGOcentric,” “INTROverted” and “ALIENated” are a few focus tracks on Lead Poison. What was the creative process for the album?

First of all I wanted to make the track titles intriguing. Like if you didn’t hear the music you would look at the titles and try to figure out what I was rapping about.

Yeah, that’s the style I went with to show that it might have a different meaning than what you may think it has. Every song on there is real. I’m putting it out there on a Tim Burton, Michel Gondry level to add a little imagination and be a little bit playful with the content. When I think about an “ALIENated” I mean that’s real talk, that whole song, but I still I wanted to be playful. *As well as “EGOcentric,” everybody needs to watch out for your ego, your ego will build you up and tear you down.

I’m big on word wizardry. The illusions of it, assembling words, creating different ways to look at words. I like to do that with music, but it still has to be a song at the end of the day. I like to give people more than one way to listen to music.

Current:  Spent any time in Ann Arbor or Ypsi?

Yeah, I’ve been to Ann Arbor. I did a show at The Blind Pig. I’ve done a gang of shows up there, actually. There’s a project I have called Witness My Growth that I did my release party up there. It was pretty dope.