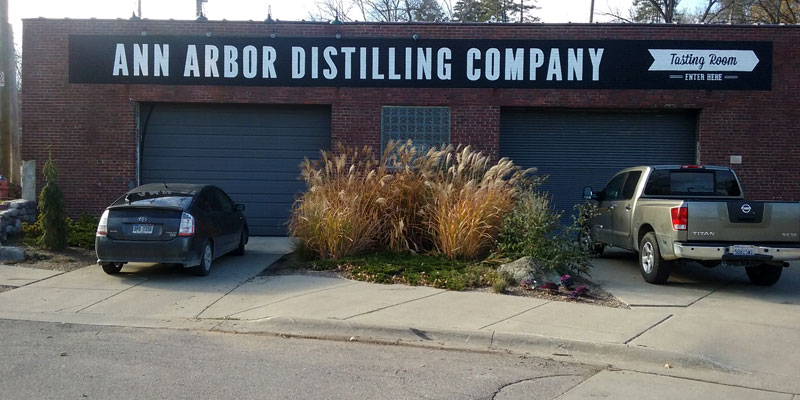 The Ann Arbor Distilling Company is a joint venture that opened late December between Rob Cleveland (CEO of ICON Interactive and co-owner of The Grange) and Ari Sussman, a master local bartender/hospitalist-turned distiller. Ari took time out of his busy schedule to discuss his vision for the AADC and the dynamics of the burgeoning craft distillery business in Michigan with your gentle narrator.

Entering the building at 220 Felch, you’ll find a smallish room with a medium-sized still. This was the original plan for the AADC – one still with an adjacent tasting room. Ari guided me through the cozy, rustic space into the nerve center of the operation: an expansive warehouse floor with a massive still flanked by kegs and other tools of the distiller’s trade. The focus products will be vodka, gin, whiskey (rye, bourbon, single malts) and experimental spirits. 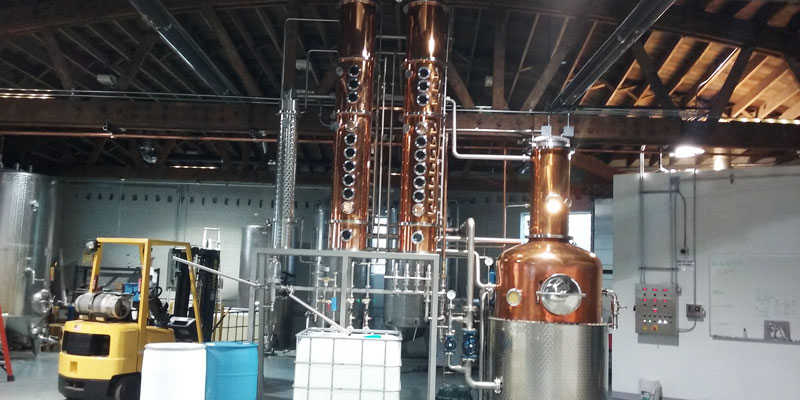 As we sat down to talk, Ari poured some vodka into an ornate glass fresh from the still. I asked him what the proof was: “When it came off the still, about 190, so it comes off the still around 95 or 96 percent.” There was a complexity to it, but also an earthy smoothness I had yet to experience in my years of imbibing.

Ari was quick to point out his insistence on local sourcing (Southeast Michigan primarily but the AADC will also draw from throughout the Great Lakes state). Not a novel concept, especially in Ann Arbor, but when asked how a Michigan distillery’s product could compare to venerable  Kentucky spirits such as Buffalo Trace (Pappy Van Winkel) or Bulleit, Sussman replied: “One of the great things about making spirits in Michigan is you’re surrounded by vast agriculture. Whether it’s corn, wheat or fruit, Michigan is a distiller’s paradise. You don’t have to go far to get the best ingredients.” 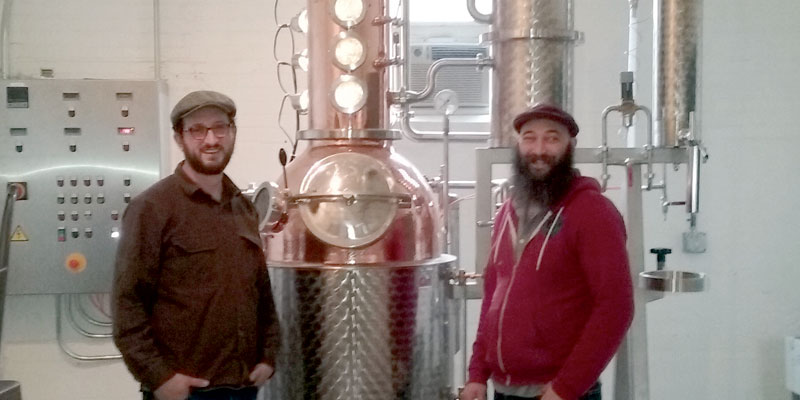 What qualifies a veteran bartender with seemingly little or no chemistry experience (outside of home brewing) to be in charge of Ann Arbor’s first distillery since Leopold Bros.’ short run from 1999-2008? His bartending resume includes the Zanzibar, eve, and Ravens Club. An avid interest in spirits led him to France where he apprenticed at wineries and brandy distillers in the Languedoc region. But when he found out about Michigan State University’s pioneering Artisan Distilling Program (founded circa 2000, by Professor Kris A. Berglund), he was so gung-ho about furthering his craft, he reached out to Dr. Berglund and offered to “mop the floors if he helped to teach (him) how spirits were made.” Dr. Berglund gave him the custodian gig and over the course of three-plus years he worked his way up to distiller.

“At MSU, along with chemical engineering and food science students, I was involved in developing spirits for many companies,” said Sussman.

A Mecca for Distilleries

Craft distilleries are popping up all over Michigan. Our fair state currently ranks third nationally with approximately 40 distilleries represented. Micro-distilling promises to be the next big wave in the potable world. Sussman credits Berglund for the movement; “In 2008, Dr. Berglund lobbied the state legislature very hard to create a small distiller’s license in Michigan, which changed the rules that basically had been around since Prohibition and allowed for this industry to thrive.”

Light snacks will be offered in the tasting room, but no real food menu has been established. The hope is to have a layout for food trucks similar to Mark’s Carts near Bill’s Beer Garden. When asked if they’d look to use the space for live music, Sussman said, “We hope that this space becomes an asset to the community, so we’ll be looking to use it for events.”

Michigan’s small distiller’s license currently allows  spirits to be sold out of tasting rooms. “We envision distribution across Michigan some time in 2016, for now the focus is going to be the tasting room,” said Sussman. Price points are expected to be 35 dollars for vodka and gin with the whiskeys being a little more expensive.

The AADC is sure to add a refined-but-fun new dimension to Ann Arbor’s carousing culture; the perfect treat for the discerning palate.