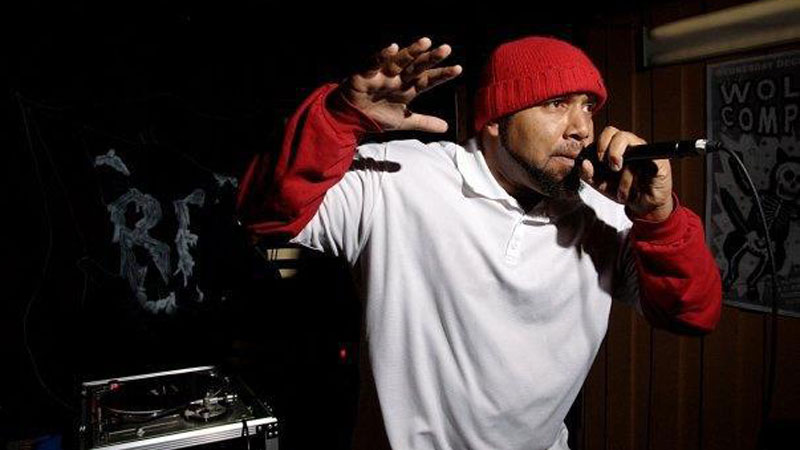 Ann Arbor and Ypsi have a fairly illustrious hip-hop heritage, lest you forget. DJ Graffiti’s event Elevation at the old Firefly Club (which closed in 2009) helped launch the career of Mayer Hawthorne (then known as DJ Haircut, a member of Athletic Mic League, aka AML).

Movements come and go, and Ann Arbor has seen its share. Left holding the baton is Duke Newcomb, a pillar of Southeastern Michigan hip-hop.

After years of building his craft, Duke released his debut album, Ground Zero, in 2014. He’s garnered Current Magazine’s hip-hop Reader’s Choice award three years running, and for good reason. He does his thing on the mic but is also the county’s most active scene-builder, connecting fans and artists and giving them a place to interact. Ann Arbor’s hip-hop community is knowledgeable and fraternal, but as many other communities in this new age, fractured, and in need of a meeting place/testing ground.

Duke carries the banner for the 734 with an open-mic event, The Dojo (at the Elks Lodge, 220 Sunset Rd., Ann Arbor) every third Thursday.

Give us a quick introduction to your pedigree in hip-hop as it relates to SE Michigan.

Duke Newcomb: I’ve been rapping forever, since I can remember, say 14. There was a peak of the Ann Arbor hip-hop scene in the late 90s/early 2000s. Elevation at Firefly Club, Blind Pig was always poppin’. I was rapping at parties but not really doing shows, just supporting. Firefly Club was actually the best/worst thing that ever happened to me. I went in there for the open mic and got up and did an a cappella and had no confidence. My words were decent but I had no presence. I get done: crickets. I would have almost rather heard boos. But I left there and never wanted to feel like that again. That’s when I got more serious about it.

When did Elevation end at Firefly Club?

I wanna say 2003. The event moved to Leopold Bros before they closed but that fizzled out, then they tried to do it at the Pig, that fizzled too. That whole squad (AML)  just moved on to LA and other places. They were really the infrastructure of the Ann Arbor hip-hop scene and when they went in different directions, other people really didn’t pick up the slack.

Maybe Dojo is the progression of Elevation?

Hopefully it’s the phoenix coming back, rising again. I just looked around, I was doing a lot of shows, concentrating on myself, I put out an album. After that, I didn’t know what to do. As far as around here, we have no scene, I have no connections outside of here. For people to grow from here, there has to be value, there has to be a scene. I could go to the next state and push my own shit, but if there’s nothing to offer where I’m coming from.

Gotcha. What is the format for Dojo?

$3 cover. Open mic signup, first come, first served. Two songs or six minutes, whatever comes first. Then a headliner. It’s for everybody, whether they’re just starting or looking to polish up, but I want the artists to see a more finished product on those nights. After that, just a cypher.

If they happen, but we’re not setting them up.

You talked about the A2 hip-hop scene rising again. What are your goals for Dojo?

First of all, my goal is just to give everybody a place to hone their craft. Long-term is to make a scene, whether it’s my event or somebody else’s, have something tangible that’s valuable. So when we start going out to other states/cities it will be like: ‘Yo, I’ll hook you up with Duke at The Dojo, set you up with a merch table, get you a place to stay, etc.’ To build a community.